The Ugandan lawmaker behind the African nation’s controversial new anti-gay bill said Monday that aid cuts imposed by disapproving Western allies were a price worth paying to “protect” his country’s values.

David Bahati, the legislator who initially sought the death penalty for some homosexual acts when the anti-gay bill was first introduced in 2009, told Reuters that he expected further aid suspensions and backlash following President Museveni’s approval of the bill last week.

The act introduced in late February imposes jail sentences of up to life on those found to have had gay sex. The World Bank, Norway and Denmark have all either withheld or diverted some $110 million in aid for Uganda. The U.S., which is the country’s largest Western provider of aid, is currently reviewing its ties.

“[The law] is very much worth it because it will protect our values. I think a society that has no moral values is a contradiction to development,” said Bahati.

Gay-rights campaigners say the new bill has forced many into hiding and report a rise in the number of night-time house raids and harassment since parliament first approved the law in December. 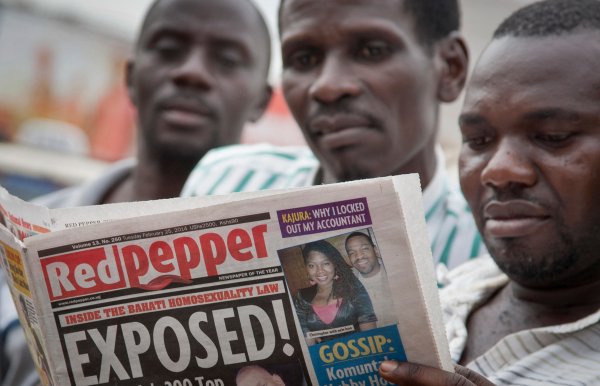 Newspaper Outs 200 'Top' Gays in Uganda
Next Up: Editor's Pick