The first witness at the opening day of the murder trial of South African athlete Oscar Pistorius said she “heard terrible screams” before gunshots rang out on the night of Reeva Steenkamp’s death.

Michelle Burger, witness for the prosecution, lives in Silver Stream Estate, a complex bordering the Silver Woods Estate where Pistorius’s girlfriend died. Burger told the Pretoria court that she and her husband were woken up just after 3am in the early hours of Feb. 14 last year by the sounds of “terrible” and “blood-curdling” screams.

Burger told the Pretoria court that she then heard a man scream for help. “He yelled three times.”

“My husband took the phone and explained that people at the next estate were being attacked in their homes and someone needed to go check.”

“My husband went back onto the balcony. I stayed in bed. I heard screams again. It was worse than before. She was very scared.”

“It was like a climax. I knew something terrible was about to happen.”

Just after the screams, Burger said she then heard four gunshots, adding that there was a longer pause between the first and second gunshots than between the subsequent firings, reports AFP.

Burger, who says she had never met Pistorius, stuck to her testimony under cross-examination from defense advocate Barry Roux who questioned her on discrepancies between her initial statement and later testimony.

Pistorius has pleaded not guilty to murder, claiming he shot Steenkamp after mistaking her for an intruder. He faces a life sentence if convicted. 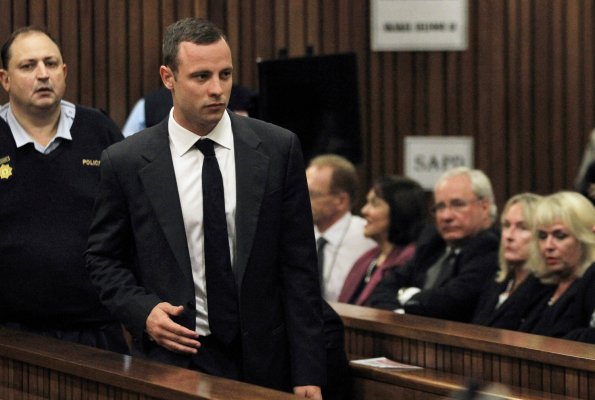 Pistorius Pleads Not Guilty During Murder Trial
Next Up: Editor's Pick