At Weekly Exorcisms, Egypt's Muslims and Christians Unite Against the Demons

The demon that had possessed the elderly Muslim woman was so strong that even an Imam couldn’t get rid of it. So her family opted for a priest. “My mother is possessed by a jinn,” the woman’s daughter said, by way of explaining why she and her Muslim family had decided to attend a recent Thursday night mass last month at Cairo’s St. Sama’an Cathedral. Her mother, who was slumped over a nearby bench, gave no indication of hearing anything. In a few hours she would be yipping and howling along with dozens of other women similarly possessed, but for the moment she just stared into the middle distance and muttered softly to herself.

Tensions between Muslims and Christians have been high in Egypt, ever since a military coup against the country’s first democratically elected Islamist President on 3 July unleashed a spasm of violence that saw churches burned, priests murdered and Christians threatened in hate speeches broadcast across the country. But there is at least one sphere of Egyptian contemporary life where interfaith cooperation perseveres, and that is at weekly exorcisms performed by one of the country’s most celebrated priests, Father Sama’an Ibrahim. He is one of the few priests in Egypt who can preform exorcisms — not even the Coptic Pope can — and his reputation for expelling demons of all kinds extends well beyond his Christian flock. Muslim Imams can do exorcisms as well, explains the woman, who declined to give her name, but her mother’s case required some extra muscle. “We went to a mosque first for healing, but the demons who harm her are more afraid of the Christian priest.”

For good reason. Father Sama’an is a force to be reckoned with. Inspired by a vision, he carved his church out of the caverns and crumbled rocks of Cairo’s Mokattam Mountain nearly 20 years ago. His congregants were the local Christian garbage pickers who had been corralled into a foul-smelling slum at the mountain’s edge. Nowadays, he draws Christians from across the capital, rich and poor alike. His humble church is now one of the largest in Egypt, with a worldwide congregation tuning in to weekly masses via a live video feed broadcast on Facebook and cataloged online. The Thursday night service, when the exorcisms take place, is held in a vast grotto illuminated with floodlights. Every chair in the 2,000-seat hall is filled. With its mixed-gendered choir singing buoyant gospel in Arabic, the service is more contemporary evangelical than incense-tinged traditional. The homily is upbeat. So far, so Sunday school. The demons are quiet.

But as Father Sama’an concludes his sermon by leading the congregation in a recitation of the Lord’s Prayer in Arabic, a chorus of yips and howls rises from a corner of the church concealed from the boom-mounted video cameras that continuously sweep the audience for the live feed. Muslim leaders are aware that their followers go to priests for exorcisms, but filming Muslim attendees at a church service could inflame tensions, whispers one congregant, a taxi driver named Mahrous, so those about to be exorcized have their own roped off section. Most of them are Muslim, he adds: “Christians rarely get possessed, because they are baptized young.”

Four church volunteers carry an older woman, writhing and swathed in a voluminous headscarf, towards the roped off area. She repeatedly interrupts the prayer with caterwauled exhortations that “There is no God but Allah,” the Muslim declaration of faith. Father Sama’an, draped in a black robe and a black knit cap, breaks into the prayer to gently remind his congregation to focus. “Don’t pay attention,” he says. “The devil just wants to destroy our congregation.” The possessed section breaks out into another round of nerve-shattering hoots and screeches. The congregation responds with a louder recitation of the Lord’s Prayer. “Crush the devil beneath your feet, don’t let him get to us!” shouts the priest from his podium.

Prayer over, Father Sama’an plunges from the stage into the roped off section, holding his silver cross before him like a beacon. With his other hand he flings holy water over the crowd from a crumpled plastic bottle. Attendees, Muslim and Christian, possessed and not possessed, surge towards him, attempting to catch the droplets in their hands. When they do, they rub the water over their faces. They reach for his long white beard; they clutch at his robe. A woman collapses at his feet in a spasm of garbled cries. A relative whispers in Father Sama’an’s ear. He nods, then leans over the woman while an usher holds her upright. Clasping his cross to her head, he mouths an incantation. Then he whips holy water into her face three times. She rises to her feet, rigid, then collapses again. Her family drags her out of the way and the priest moves on.

Father Sama’an wades through the crowd, dispensing prayers, taps on the head with his cross and jets of holy water. The recently exorcized are carried out by anxious, relieved relatives or left to recover on empty pews. “We need you Jesus. We need you Jesus,” chants a Christian volunteer from the sidelines. In his passionate pleas for assistance he has grabbed the hands of two male Muslim onlookers — family members of the possessed — and urges them to join in. They resist stiffly. Though the demons may be more afraid of a Christian priest, they are still afraid of their Imams. 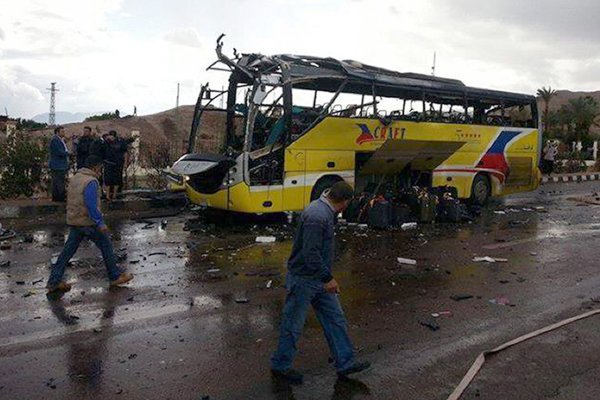