The Cannes Palme d'Or: Who Won and Who Was Robbed

Over its 3 hour, 16 minute duration, Winter Sleep probes the psychology of a Turkish landowner confronting crises from his young wife, his sister and his aggrieved tenants. Playing on the second full day of the 11-day Festival, the movie was immediately touted as a Palme front-runner. Winter Sleep fulfilled its promise when presenters Quentin Tarantino and Uma Thurman, in town for the 20th anniversary of the Palme d’Or champ Pulp Fiction, presented Ceylan with tonight’s biggest award.

Best Actor went to Timothy Spall for his portrayal of the painter J.M.W. Turner in the Mike Leigh bio-pic Mr. Turner. In a minor upset, Julianne Moore took Best Actress for her fearless comic turn as an aging actress in David Cronenberg’s hate letter to Hollywood, Maps to the Stars. Bennett Miller was named Best Director for Foxcatcher, the true-crime tale of two Olympic wrestlers (Channing Tatum and Mark Ruffalo) and their troubled patron (Steve Carell in a chilling turn as zillionaire John du Pont).

The Grand Jury Prize — second place — was awarded to the Italian Alice Rohrwacher for The Wonders, the tender tale of a beekeeeper and his four precocious children. The portentous, politically prickly Russian drama Leviathan reeved the Screenplay award. The silver-medal Jury Prize was shared by baby-faced Xavier Dolan, 25, for his convulsive, compelling family portrait Mommy, and perpetual enfant terrible Jean-Luc Godard, 83, whose Adieu au langage addressed the concerns of a man, a woman and a god — in 3-D. Godard was not present at the ceremony.

Ceylan’s stately accession to the Golden Palm began 11 years ago with a Grand Jury Prize for Uzak (Distant), followed by the Critics’ Prize for Climates in 2006, Best Director for Three Monkeys in 2008 and another Grand Jury Prize in 2011 for his police non-thriller Once Upon a Time in Anatolia. At 55, the presumptive heir is now le roi de Cannes.

In his acceptance speech, Ceylan noted that “This year is the 100th year of Turkish cinema, and it’s a good coincidence I think. I want to dedicate the prize to the young people of Turkey,” and added, in an allusion to the 11 deaths in antigovernment protests that began in May 2013, “especially those who lost their lives during the last year.”

Campion, the Australian filmmaker whose The Piano shared the Palme d’Or with Chen Kaige’s Farewell My Concubine in 1993, read out the winners. Looking like Meryl Streep’s more severe sister, and managing to mispronounce the names of most of the jurors with whom she had spent that past 11 days, Campion received an affectionate kiss from Festival President Gilles Jacob, retiring at 83 after 38 years at the Festival. Jacob told her, “Jane you know what you mean to me.”

It was a night for big emotions. Dolan, the French-Canadian wonder boy who wrote, directed and starred in his first film, I Killed My Mother, at 19, paid tearful tribute to Campion, saying, “Few films changed my life in the way that your Piano did,” and speaking to “people of my generation: There are no limits to our ambitions excerpt the ones we build for ourselves.” More tears.

Spall gave the longest, most passionate and entertaining speech. Pulling out his cellphone to read a speech he had written on the flight back to Cannes, he began reading his thanks but was interrupted by a beep: “Oh, I got voicemail.” He spoke of his leukemia treatment at the same time Leigh was winning the 1996 Palme d’Or for Secrets & Lies. Briefly, overcome, he said, “Oh, sorry, I’m crying. Sentimental old fool.” When the audience applauded, he murmured, “Thank you. The irony of your applause is not lost on me.” Spall spilled out his gratitude to his director, the cast and crew, ending, “Most of all I just thank God that I’m still here and alive.”

In a year with eight winning films chosen among only 18 contenders in the official competition, not many worthy works got slighted. Two we’re sorry for: the Argentine comedy Wild Tales, which brought satiric intelligence and fun of the highest order to this mostly mopey fortnight; and Two Days, One Night from directors Jean-Pierre and Luc Dardenne, two-time winners of the Palme d’Or. Their thoughtful drama featuring a spectacularly solid performance by Marion Cotillard — who still has not won any official award at the Festival she so frequently graces. They wuz robbed.

In prizes awarded by other juries, the first-film Caméra d’Or award went to Party Girl (directed by Marie Amachoukeli, Claire Burger and Samuel Theis), the rambling account of a former dancer in blowsy middle age. Leidi, directed by Simón Mesa Soto, took the Short Film Palme, with special mention to Clément Trehin-Lalanne’s Aïssa and Hallvar Witzo’s Ja Vi Elsker. May we be citing these filmmakers’ feature films in Cannes coverage in future years.

So we bid adieu, or rather au revoir, to our 41st visit to this Riviera festival. As we say each year, with fingers crossed, à l’année prochaine! See you next Cannes. 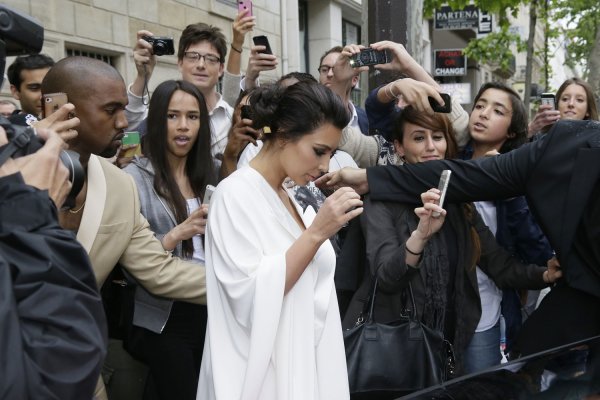 Kim and Kanye Are Married
Next Up: Editor's Pick