The inability to live-tweet games or take stadium selfies is the least of World Cup attendees’ worries.

Experts say the Brazilian government and telephone companies are so unprepared for the hundreds of thousands of people about to descend upon Rio de Janeiro and other cities that there could be mobile blackouts or jammed emergency calls, the Associated Press reports.

In the best-case scenario, calls will drop frequently and wireless Internet services will be frustratingly slow. The government was expected to invest in 4G mobile networks across the 12 cities hosting the soccer matches, but such plans never materialized.

“We’ve learned from the Confederations Cup, and put specific trucks outside the stadium to enhance the connectivity,” FIFA’s marketing director Thierry Weil said. “But at the end of the day, to be honest, having 70,000 in a stadium, where everybody wants to make a phone call at halftime, well, I’d say you better talk to your boyfriend or girlfriend ahead of the game.” 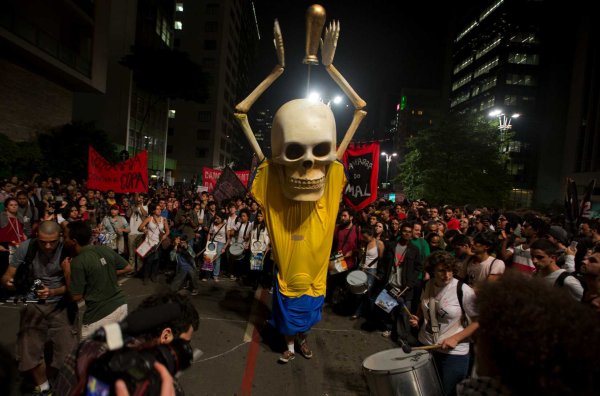 Brazil Police-Protesters Clash Ahead of the World Cup
Next Up: Editor's Pick