Oscars 2014 Superlatives: The Real Winners and Losers from the Academy Awards

If the Academy asks us to sit down for over three and a half hours to watch an awards ceremony, you better believe that we are going to make a list of superlatives that chronicles the good, the bad, and the ugly.

With that in mind: Here is TIME’s real winners and losers of the 2014 Academy Awards:

Most likely to get lice: Everyone in this selfie

Biggest missed opportunity: Lice or not, Liza missed out the most viral tweet of all time

Most beautiful: According to host Ellen DeGeneres, “I’m not going to say who looks the most beautiful, but it’s clear: It’s Jared Leto.”

Most likely to be the butt of a joke: Jonah Hill’s penis, which actually got called out by DeGeneres more times than Jennifer Lawrence’s fall last year.

Dress most likely to cause a seizure: Anne Hathaway. So. Many. Sparkles.

Most likely to get a Dancing with the Stars deal: Pharrell and Meryl

It was corrected to this:

Most likely to shatter our Frozen hearts: Idina Menzel.

Most likely to be sold for tens of thousands of dollars on eBay: Lupita Nyong’o’s lip balm

Best mea culpa: And the Oscar goes to … The Academy 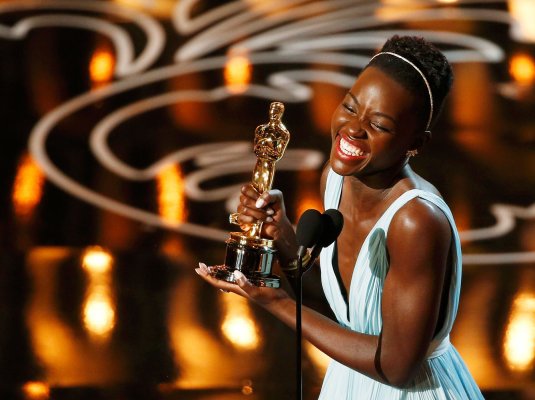 Lupita Nyong'o's Speech Brings Down The House
Next Up: Editor's Pick