11 Surefire Ways to Turn Your Dreams Into Reality

The loftiest goal I ever set in the early stages of my professional career was to become a Navy SEAL. Achieving that milestone gave me a new perspective and set the foundation for the rest of my life. Nothing seemed too far from my grasp.

The first six months of training, called Basis Underwater Demolition/SEAL, is designed to identify those not solely committed to the mission of becoming a Navy SEAL, separate them from the herd, and force them to quit. Unless you quickly identify what you personally need to be successful, you will fail. Here are 11 important tactics I learned during that journey that I use every day in the constant pursuit of personal and professional success.

1. Get the simple things right.

During training, Sunday was always depressing, because you knew the inevitable torture that Monday would bring. Monday was inspection day. To be successful as a SEAL, your attention to detail must be unwavering. So you start with the little things, like making your bed and cleaning the floors. I used to keep my bed impeccably made and sleep on top of the covers with a sleeping bag. If everything wasn’t perfect, you paid for it. And sometimes when it was perfect, you paid anyway. The lesson: If you can’t get the simple things right, you can’t expect to successfully tackle more daunting tasks.

2. Set both realistic and unrealistic goals.

Successful people are relentless goal setters. They break down larger milestones into smaller, more achievable tasks. One of the most unrealistic goals a SEAL candidate can set is completing Hell Week. You don’t sleep for a week. You run countless miles with boats, logs, and backpacks. You swim dozens of miles in the frigid ocean. You run the obstacle course daily and do more pushups and pull-ups than you can count. All while battling second-stage hypothermia, sores, and often fractures. Some students quit just minutes into Hell Week. You can’t allow yourself to imagine what the end will look like. So you make–and achieve–one small goal at a time and pray for the sun to come up the next day. A series of near-term realistic goals will help you get closer to your big audacious ones.

This one seems obvious, but many people underestimate the level of effort it takes to be successful and achieve aggressive goals. It astonishes me that some of the guys showing up to SEAL training put no real time or effort into preparation. If you don’t work hard preparing for potential success, you won’t change that behavior when things get really tough.

4. Get others to work with you.

A SEAL training class is broken down into boat crews of seven guys each: three on either side of the boat and a coxswain in the rear steering. During the first phase of training, you take the boats out through the surf and paddle miles up and down the beach every day. I was in a winter class, where the swells can be up to 10 feet or more. It takes every man digging in and paddling hard just to get through the surf zone without getting tossed upside down. When setting goals and pursuing success, you must sometimes lead and get others to paddle with you. You can’t do it all alone. The minute you realize that you don’t know everything and need help along the way, the better off you will be.

Successful people don’t make excuses for failure or shortcomings. They acknowledge their strengths and weaknesses and seek feedback from trusted advisers. The longer you sit around making excuses, the further you will drift from the possibility of achieving your goals.

One of the most fascinating things about SEAL training is that out of the couple hundred guys who start a training class, you could never hand pick the 30 or so who will graduate. Rarely is it the Rambo types who make it. Usually they are the first to go. Underestimating people, whether peers or competitors, is one of the worst things you can do. People who go far in life measure others by qualities such as integrity and strength of heart. Empower those around you, and you will be surprised by the outcome.

When entering this phase of my life, I knew that statistically, the odds were not in my favor. I also knew that if I didn’t try, I would never forgive myself. I decided that I would rather try and fail than be the guy who says, “I was thinking about trying that.” You simply can’t look at life through a lens of fear. If you take a calculated risk and fail, at the very least you have a valuable learning experience. Get back up. Dust off. And never, ever, be out of the fight.

8. Embrace the repercussions of your actions.

On your path to success, you will make mistakes. One of my early mistakes was slacking off on my pushups after the obstacle course during the first day of the third phase of training. An instructor was looking through the rearview mirror while sitting in the truck. He was counting to see if I did the required 50. I decided to do 30-ish. That mistake earned me a spot with the “cheaters” the following week while at the shooting range. Each day, before we started, during lunch, and between drills, the cheaters would line up and sprint to the top of a nearby mountain in full gear. If you failed to make the cutoff time, you ran it again. It was torture. But the week after, I miraculously cut my four-mile run time by three minutes. Learn from your mistakes and turn the consequences into something positive.

My favorite passage from the Navy SEAL creed reads: “I will never quit. I persevere and thrive on adversity. My Nation expects me to be physically harder and mentally stronger than my enemies. If knocked down, I will get back up, every time. I will draw on every remaining ounce of strength to protect my teammates and to accomplish our mission. I am never out of the fight.” Enough said.

Staying positive seems like an obvious trait for successful people, but it’s easier said than done. Your character is defined by what you do when things get tough. During Hell Week, one of the fun tasks is called “steel pier.” After spending some time in the cold water of San Diego Bay, you strip down to your undershorts and lie down on the freezing metal pier while the instructors spray you with hoses. Your body convulses uncontrollably as it reaches stage-two hypothermia. But the guys who found the strength to laugh (partly because of delirium) during this event were the ones standing proud at graduation. When things get rough and are out of your control, don’t forget to laugh.

Success comes with sacrifice. Let selfish ways fall by the wayside, and know that you can’t have your cake and eat it, too. The most successful people in the world have made significant sacrifices along the way. To become a SEAL, you give up comfort, and the discomfort only increases the further you go. But you get used to it, because you know what you are doing is worth it.

The path to success is paved with seemingly insurmountable obstacles, but you can’t lose heart. Stay strong, be humble, and lean on others for support when necessary. 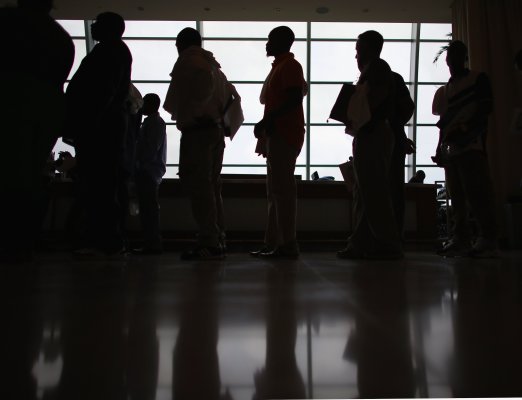 47% of unemployed Americans have just stopped looking for work
Next Up: Editor's Pick