Liam Neeson in a scene from "Non-Stop."
Universal Pictures—AP
By Richard Corliss

Liam Neeson doesn’t have God as his copilot in Non-Stop. In fact, the copilot in the new aviation disaster movie thinks the air marshal played by Neeson is either a psycho or a cagey terrorist. But the 61-year-old Irish star doesn’t need divine intervention to attract paying customers to his action movies. Just now he’s the unrivaled deity, the one true god, of the B-movie thriller.

Non-Stop led a burly Oscar weekend with $30 million, according to preliminary studio estimates, followed by the New Testament remake Son of God, which earned $26.5 million. The two newcomers finally dethroned the three-time champ The LEGO Movie, which still earned a tidy $21 million for a 24-day total of $209.3 million. The three pictures accounted for $77.4 million, or about what the top eight films took in on Oscar weekend last year. Business has been up from the previous year each weekend since last Thanksgiving.

(READ: The Simpsons’ Matt Selman on the tantalizing fascism of Legoland)

Costing about $50 million to produce, Non-Stop costars Julianne Moore as one of many suspects in the airborne whodunit and—in a role so small you truly would not notice her if you didn’t know she was in it—Lupita Nyong’o, the frontrunner tonight for Best Supporting Actress in 12 Years a Slave. Pushing the boundaries for a PG-13 rating, this violent melodrama received a lofty A-minus rating from an audience that skewed 51% female and 65% over the age of 25. The early patrons also had a broad ethnic range: 46% Caucasian, 27% Hispanic, 13% African-American and 9% Asian. They helped make Non-Stop Neeson’s biggest action film debut except for Taken 2, which opened to $49.2 million in late 2012.

Say the name of producer Mark Burnett’s Biblical film to middle-age Catholics, and they’ll inadvertently start humming the chirpy folk-rock hymn “Sons of God, Hear His Holy Word,” with its sing-along chorus, “Eat His body, drink His blood,/ And we’ll live in eternal love.” (Not for nothing was “Sons of God” chosen as one of the 10 worst hymns of all time.) With hunky Portuguese TV star Diogo Morgado as the Nazarene, Son of God is not really a movie at all; it’s basically a boiled-down version of the second half of last year’s highly rated 10-part History Channel series, The Bible. Cannily promoted to Christian groups, the theatrical version earned an impressive $4.8 million in presales. The CinemaScore was next to godly as well: A-minus, matching the rating for the Neeson film. And unlike secular movies, Son of God could get a Sunday spike in business. While infidels are glued to their TVs tonight for the Oscar show, the faithful may make a pilgrimage to the multiplex.

For a Messiah movie, $26.4 million is swell, but it’s not Mel. Exactly 10 years ago, Mel Gibson’s The Passion of the Christ registered one of the most impressive openings since Lazarus’s tomb. Premiering on a Wednesday, the movie earned $41.3 million ($55.5 million in today’s dollars) in its first two days and another $83.8 million ($112.7 million today) for a five-day total of $125.2 million ($168.3 million). Made for a thrifty $30 million, the Gibson Passion ended up with $611.9 million worldwide, or $822 million today — a fabulous return on investment. Recall too that the dialogue was spoken in two dead languages, Aramaic and Roman; the Christ also became the top-grossing foreign-language subtitled film of all time.

(READ: Why tonight’s Oscars will be like the Independent Spirit Awards)

Of the nine movies that are finalists for tonight’s Best Picture Oscar, five—American Hustle, The Wolf of Wall Street, Philomena, 12 Years a Slave and Gravity—finished between 11th and 20th place. So did the Oscar nominees The Wind Rises (Animated Feature) and Lone Survivor (Sound Editing and Sound Mixing). Frozen, which will undoubtedly win Animated Feature as well as Best Song, remained in the top 10 for the 14th straight week, and today crossed the $1-billion mark in worldwide ticket sales. The domestic and global audience just won’t let it go.

Weird Release Department: The makers of Anchorman 2: The Legend Continues recut the whole movie and put it in theaters as a longer R-rated mashup, promising 44 minutes of previously unshown material and “763 new jokes.” The update — call it Anchorman 2: The Funny Version — earned a meager $1.3 million in 1,300 theaters. Comedy is hard.

(READ: Our review of Anchorman 2: The First Version)

Tragedy is Harder Department: This weekend also saw the release of Stalingrad, Fedor Bondarchuk’s epic view of the five-month siege by Hitler’s soldiers of the Soviet city, in the 1942-43 battle that changed World War II to the Allies’ advantage. Shown in 3-D and IMAX, the movie earned $500,000 in 308 theaters. But what must have been the thoughts of audiences, on the same weekend that Putin’s soldiers invaded Ukraine, for a confrontation that could have perilous geopolitical consequences? Ukraine, Europe and the United States faces a dreadful scenario that may be beyond the reach of the Almighty, or even Liam Neeson. 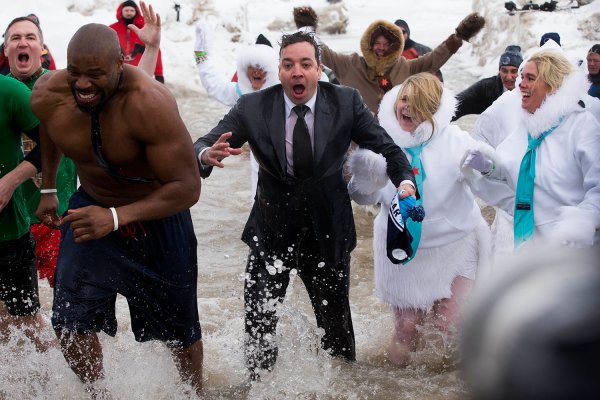