Ukrainian soldiers and a Ukrainian army tank stand just inside the gate at a Ukrainian military base that was surrounded by several hundred Russian-speaking soldiers in Crimea on March 2, 2014 in Perevanie, Ukraine.
Sean Gallup—Getty Images
By Sam Frizell

Ukraine mobilized for war Saturday, escalating the most dangerous standoff between the Kremlin and the West since the Cold War, after Russian President Vladimir Putin declared he had a right to invade the country to protect Russian interests.

Kiev directed its armed forces to be put on “full combat readiness” as it mobilized and trained reserve forces, closed its airspace and boosted security at key sites, the BBC reports. The Russian army was said to be digging trenches between Crimea and mainland Ukraine as troops occupied key sites, including airports and communication hubs.

Russian forces had reportedly already swarmed into Crimea when Putin obtained permission from his parliament to officially move troops into Ukraine, taking government buildings and occupying Crimea’s capital, Simferopol. They surrounded several Ukrainian military bases, Reuters reports, demanding troops lay down their arms. Some refused, but no shots have yet been fired.

“This is not a threat: this is actually the declaration of war to my country,” said Ukraine’s Prime Minister Arseny Yatseniuk, head of the pro-Western opposition government that took power in Kiev last week.

“If President Putin wants to be the president who started the war between two neighboring and friendly countries, between Ukraine and Russia, so: he has reached this target within a few inches. We are on the brink of disaster.”

In Kiev’s Independence Square, the scene of anti-Moscow demonstrations since November, thousands of protestors demonstrated against Russian military action. In eastern Ukraine, where most ethnic Ukrainians speak Russian and much of the region is oriented East, pro-Russian demonstrators hoisted flags outside government buildings and called for Russia to defend them. Kiev called the move a ploy to encourage Russian troop mobilization across the wider region.

Western government held emergency meetings to discuss a possible response Saturday, with the U.S. ambassador to the United Nations, Samantha Power, calling Russia’s troop deployment a violation of Ukraine’s sovereignty. “It is time for the Russian intervention in Ukraine to end,” she said. 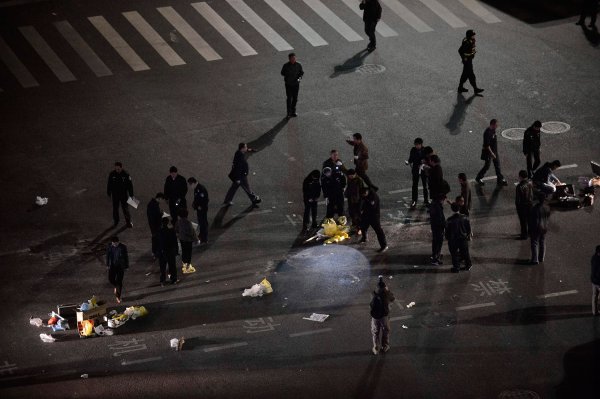 27 Dead After Attack on China Train Station
Next Up: Editor's Pick