A foreign tourist sits in a Thai army vehicle as soldiers deploy on a downtown street after martial law was declared on May 20, 2014 in Bangkok.
Rufus Cox—Getty Images
By David Stout

The scenes were all too familiar in the world’s most coup-prone country on Thursday. Military vehicles fanned out across Bangkok, as generals spoke forcefully on national broadcasts about the need for order after months of political unrest. But like the majority of the 11 other coups in Thailand’s modern era, Thursday’s affair remained bloodless.

For tourists hoping to lap up the country’s renowned cuisine and relax at its idyllic beaches during the upcoming months, travel experts say it’s unlikely they’ll be directly affected by the country’s latest putsch. However, the industry on the whole might not be so lucky.

As of Friday morning, airports remained opened and life in Bangkok kicked off to its perennial chaotic start.

“It’s business as usual,” Suparerk Soorangura, of the Association of Thai Travel Agents, tells TIME. “Coups usually come in a peaceful way and don’t have much of an effect on the normal way of life.”

The largest hindrance to both Thais and foreigners remains a nationwide curfew, from 10 p.m. to 5 a.m., implemented by the country’s new military rulers yesterday evening. However, authorities have granted special dispensation to those traveling to and from the nation’s airports during that time.

“[The] curfew is nationwide, but in some of the more remote areas of Thailand, and on the beaches, it hasn’t been very strict,” says Richard Barrow, a popular travel blogger in the country, via email. “[It] may last less than a week if there isn’t any unrest.”

Following the announcement of the coup, the U.S. embassy in Bangkok issued a statement advising American citizens to “avoid areas where there are protest events, large gatherings, or security operations and follow the instructions of Thai authorities.” But officials stopped short of calling on Americans to exit the country.

“We’re not, at this time, advising American citizens to depart,” U.S. State Department spokesperson Jen Psaki told reporters during a press conference in Washington on Thursday.

During a televised address to the nation on Thursday, the general at the helm of the country’s newly formed military junta promised to keep foreigners in Thailand safe.

“For the ambassadors, consulate and international organizations, including foreigners living in the Kingdom of Thailand, the peace-maintaining committee will protect you,” said ruling General Prayuth Chan-ocha, according to the New York Times.

Unless the Red Shirts strike back at the junta — and that remains a distinct possibility — Thailand could even be safer now than it was in the past six months of mass protests by pro- and antigovernment demonstrators in the capital, during which 28 people were killed and more than 700 injured. The protest sites have been cleared and thousands of demonstrators sent home — for now at least.

“At the moment, everything is open as normal,” says Barrow. “With the protesters off the streets of Bangkok, the city is actually safer than it was before.”

Regardless of the realities on the ground, Thailand’s latest spell of military rule will likely put an increasingly large dent in one of the economy’s most important engines.

The kingdom’s tourism sector last year raked in an estimated $35 billion — accounting for approximately 9% of economic output. But in 2014, an estimated 400,000 fewer people traveled to Thailand during the first four months of the year.

Earlier this month, the Tourism Council of Thailand cut its foreign-tourist arrivals target for 2014 to 26.3 million from 28 million — the lowest such figure in half a decade, according to Reuters.

On Monday, the country’s National Economic and Social Development Board reported that the Thai economy contracted by 2.1% during the first quarter, when compared with the previous three months.

So while there’s still plenty to grin about in the Land of Smiles, there are more reasons to frown as well. 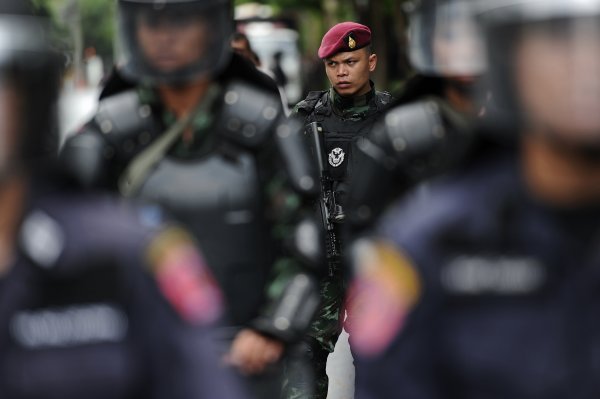 Thai Army Tightens Its Grip
Next Up: Editor's Pick