Members of the Thai security forces stand guard outside the Army auditorium in Bangkok where prominent figures including former Prime Minister Yingluck Shinawatra are reporting to the junta on May 23, 2014.
CHRISTOPHE ARCHAMBAULT—AFP/Getty Images
By Francis Wade / Bangkok

More politicians are expected to report to the army headquarters in Bangkok today, with the recently deposed Prime Minister Yingluck Shinawatra having already turned herself in, according to the BBC. They face possible arrest, while scores of politicians and activists have been banned from leaving the country. Commentators questioned the grounds for the coup in light of the fact that the ongoing political turmoil had been limited mainly to Bangkok. The U.S., a strong ally of Thailand, sharply criticized the army’s intervention, with Secretary of State John Kerry asserting that “there is no justification for this military coup.”

In downtown Bangkok yesterday evening, streets that would normally hum with activity late into the night began to empty as the 10 p.m. curfew approached. Television screens in restaurants and cafés across the country carried the emblem of the newly formed National Peace and Order Maintaining Council, headed by Prayuth, who has proclaimed himself acting Prime Minister. Patriotic songs played on a loop, breaking only for the army’s spokesperson to announce updates to the rules now governing the kingdom.

Among those was a warning that social-media users who criticized the coup could face prosecution, with hugely popular platforms like Facebook and Twitter threatened with closure in the event that they failed to deliver “accurate news to the people.” Thai-British academic and activist Giles Ji Unpakorn wrote on his Facebook page that the last time a crackdown on the flow of information occurred on this scale was when “the army raided bookshops and libraries in Thailand … on Oct. 6, 1976,” the date of the infamous massacre of student protesters by the army at Thammasat University, during a prior phase of military rule.

Critics of the coup have been placed in the crosshairs of the new rulers. Verapat Pariyawong, an expert on Thailand’s legal system, said he knew of people who had received “serious threats to their security,” but did not want to go public with them “in order to contain the fear to themselves — that is, they don’t want the public to also fear speaking out.” Verapat warned that an upsurge in attacks would likely follow. “[A coup] will always produce very detrimental effects because it deepens the conflict,” he said. Referring to a 2010 crackdown on a Red Shirt demonstration in central Bangkok in which 90 people died and 2,000 were injured, he added: “The situation is now worse than it was in 2010, because the preparedness of the Red Shirts to avenge the deaths of 2010 makes it much more uncertain what will happen next.”

Exactly how the course of events went in the lead up to the coup announcement yesterday remains unclear. Leaders from both the People’s Democratic Reform Committee (PDRC) — whose Yellow Shirt supporters had spent six months agitating for the removal of the Pheu Thai government — and the progovernment Red Shirts were summoned by Prayuth for a second day of negotiations at the Army Club in Bangkok. Shortly after, 14 people, including PDRC leader Suthep Thaungsuban, and Red Shirt leader Jutaporn Prompan, were detained and taken to a barracks next door. Television channels were seized, and Prayuth, flanked by senior military officials and the police chief — the new faces of power in Thailand — announced that the country had come under the control of the army. Troops guarding the entrance to the Army Club blocked journalists from entering, but at 6 p.m., TIME witnessed a convoy of army trucks packed with soldiers, and led by a machine-gun-mounted Humvee, entering the base via a side gate.

The economy, which has already slowed to a 2.8% growth following months of street protests, is expected to take a heavy knock. The tourism sector, which accounts for 10% of GDP, already lost nearly 400,000 arrivals in the first quarter of the year. Shovon Kibria, a Bangladeshi-American tourist, said his Bangkok-bound plane was forced to sit on the tarmac at Chittagong airport in Bangladesh for an hour yesterday, with the pilot announcing that martial law, imposed on Tuesday and considered a precursor to yesterday’s coup, had affected landing clearances at Suvarnabhumi Airport.

“I was aware of martial law being imposed but didn’t think that would affect me in any way, but hearing about the curfew completely changed our plans,” he said, adding that he and friends decided not to venture far from their hotel yesterday evening following the order to close all public transport in the country by 9 p.m.

Supporters of the PDRC, who have camped out in Bangkok since November last year cheered at the announcement yesterday, with many claiming a victory in the battle to topple the Pheu Thai government and rid Thailand of the rule of Thaksin Shinawatra, the exiled former Prime Minister who is considered chief controller of the Pheu Thai party and whose sister Yingluck is regarded as a proxy.

“They [the PDRC] know that the military is sympathetic to their cause — the movement against corruption and abuse of power by Thaksin,” said Kraisak Choonhavan, a former Democrat Party Senator who regularly took to the stage at PDRC rally sites.

Antipathy toward Thaksin is vitriolic among upper-middle-class Thais, yet he commands an overwhelming majority of support in the country. The opposition knows that elections scheduled for July would see his party claim a sweeping victory, so they have looked to the courts and Senate, traditionally seen as biased in favor of the Democrat Party, to topple the government.

“The PDRC probably think military rule is better than the barbaric capitalism under Thaksin,” Kraisak said. “The ideological ones among you will probably ask what the future of democracy in Thailand is under the military. But all the small details of Thaksin’s rule — the extra-judicial killings, the rice scheme — came under democracy. How does democracy produce such monsters?”

It is increasingly in Thailand’s legal system — the so-called juristocracy — that the machinations of politics plays out. The Constitutional Court, whose verdict on May 7 saw Yingluck removed from office, has long been considered favorable to the Thai establishment. “The Senate, too, now has to be watched very closely,” said Verapat. “The fact that the coup instigators opted to only temporarily suspend the constitution and specifically provide that the Senate continues to function suggests that the coup instigators may find some use in the Senate.” This may occur through asking Senators to nominate or endorse a temporary government or reform council, he added.

The streets of Bangkok today appear normal, and restaurants dished out the usual lunchtime fare to those who made it to work. Come 10 p.m., when street vendors pack up early and the lights of the ubiquitous 7-Eleven stores go out across the nation, Thais will once again be reminded that below the surface calm lies an almost uniquely dysfunctional political system that has seen the army annul a constitution that it wrote itself, and the country stagger from one coup to another, punctuated by mass street violence and the rule of the men in green.

“The worst part of all this is that it produces a generational problem,” says Verapat. “Young Thais have been and will continue to be indoctrinated that force is above all else, and that there’s really no use playing by the rules. They will grow up accustomed to such a culture, they will run the country, and the vicious cycle never ends.” 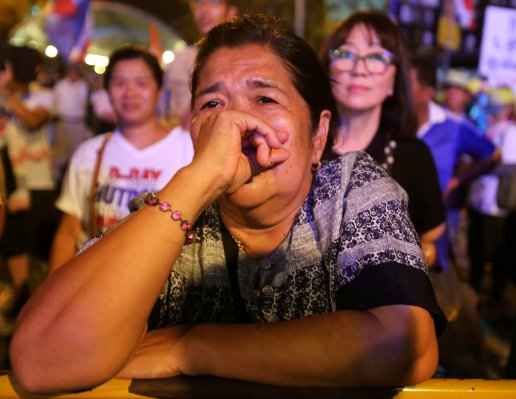 Thailand Is Doing a Great Job of Screwing Up Its Potential
Next Up: Editor's Pick