A yellow-green gas settles in the street of a Syria village. A man wearing a gas mask rushes a woman with a cloth wrapped around her face to safety. Others scramble in confusion. Coughing can be heard in the background.

The scene comes from a new video posted online Friday by Syrian rebel activists, who say it reveals a recent chlorine gas attack on a pro-rebel village conducted by the forces of Syrian president Bashar Assad.

The video’s authenticity is still unconfirmed. But top Obama administration officials are bracing for confirmation — in weeks or even days — that chemical warfare is underway again in Syria. And that means President Obama has a new crisis on his hands.

Flash back to one of the most dramatic moments of Barack Obama’s presidency: last September 10, when Obama delivered a prime-time national address to explain why he intended to order a military strike on Syria to punish the use of nerve gas against civilians in violation of the red line he had famously drawn for Assad.

“This is not a world we should accept,” Obama said. “The purpose of this strike would be to deter Assad from using chemical weapons, to degrade his regime’s ability to use them, and to make clear to the world that we will not tolerate their use,” Obama concluded.

There was no strike, of course. Obama, who never really wanted to use force, backed a Russian proposal to remove and destroy Syria’s chemical arsenal. It was a short-term embarrassment — but one that Obama officials now call a success: Assad ceased his chemical attacks and declared his stockpile to international inspectors, who have since removed about 95% of it for destruction by the U.S.

For many Americans, Syria’s chemical weapons count as a problem solved. But that’s about to change.

While it was sarin gas that crossed Obama’s red line last summer, this time chlorine is the weapon of choice. Chlorine may be harmless in swimming pools, but it is lethal in concentrated form. Human Rights Watch says there is “strong evidence” of multiple chlorine attacks in Syria last month, with clouds of yellow gas killing 11 people and sickening another 500 with symptoms that can include vomiting, splitting headaches and uncontrollable coughing. Syrian activists say another chlorine attack earlier this week killed a disabled teenager. France’s foreign minister says Syrian forces may have used chlorine 14 times in recent months.

And now the president who said he “will not tolerate” the use of chemical weapons faces another challenge to his red line — one that will again test his credibility, and renew talk of U.S. military action in Syria.

It’s true that chlorine is far less deadly than nerve gas. But it does kill, and has done so from the battlefields of World War I to Al-Qaeda attacks in Iraq. More to the point, its use is prohibited by the international Chemical Weapons Convention, which Syrian dictator Bashar Assad signed last fall to avert U.S.-led airstrikes. (Syria did not declare chlorine, which has numerous commercial and industrial uses, as part of its chemical arsenal for destruction.)

Washington is still largely in denial about this dilemma. But it won’t be long beore it becomes unavoidable. The trigger will be the results of an investigation underway in Syria by the Organisation to Prohibit Chemical Weapons. But its outcome is predictable. French and Israeli officials have already said they believe the reports, and last week Secretary of State John Kerry said he’s seen “raw data” to the same effect.

Assad’s brazen return to warfare by poison gas puts Obama in a miserable spot. The White House will have two main options. One is react with fury and revive the threat of air strikes. “It is clear to me,” says James Jeffrey, a former Bush deputy national security advisor and Obama’s first ambassador to Iraq, “that the only position Obama can take is to say that the U.S. takes this seriously as a violation of our red line, and if that if chlorine gas is used again by regime forces, ‘I will use military force.'”

But those are words Obama badly wants to avoid. He surely has no interest in laying down a new chemical weapons “red line,” especially after his last one proved a political fiasco — and especially over chlorine, which is horrible if you inhale it but isn’t morally or strategically to far more lethal sarin gas

More likely, the White House will craft a subtler response, one designed to avert a crisis atmosphere and sidestep new talk of military action. That would likely involve pointing to the progress made toward removing Assad’s declared stockpiles (although that project is likely to miss its deadline, and questions are growing about whether Assad failed to declare some of his deadliest agents). And it would reflect a belief in some quarters of the administration that increased training, aid for and vetting of moderate rebel groups stands a growing chance of toppling Assad without the heavy hand of American air power.

But that approach comes with real costs, too. A low-key reaction on Obama’s part might look timid. The president’s critics would gleefully revisit their complaints that Obama’s red lines lack credibility. (John McCain has said that proven chlorine use would “violate the spirit” of the September deal to remove Syria’s chemical arms, requiring that Assad’s regime “finally be held accountable.”) Nervous U.S. allies from the Middle East to Asia will hardly be reassured about America’s toughness.

Neither option is simple, or palatable. But nothing is when it comes to Syria’s civil war, as President Obama already knows too well. 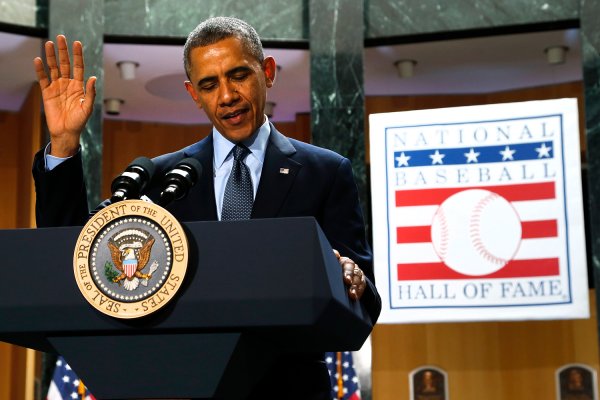