If Republicans win the Senate this year they’ll enjoy full control of Congress for President Barack Obama’s last two years in the White House. But Mitch McConnell says there will still be plenty of cooperation.

McConnell, the Republican Minority Leader who would run the chamber if his party wins, said Thursday that he’d use what he called “the exhaustion factor” to promote comity. McConnell said he would, in essence, make the world’s greatest deliberative body more deliberative and slow-moving by allowing more amendments and freeing up committees to do more work.

“The Senate majority under my leadership would break sharply from the practices of the Reid era, in favor of a far more free-wheeling approach to problem solving,” McConnell, referring to Democratic Majority Leader Harry Reid, said during a speech at the conservative American Enterprise Institute. Saying Reid has done “tremendous damage” to the Senate, McConnell promised he would “work to restore its traditional role as a place where good ideas are generated, debated and voted upon. We’d fire up the committee process, and when I say that I mean Democratic ideas, too.”

McConnell said the Senate would ultimately be more productive if the majority party didn’t block most amendments seen as poison pills meant to kill legislation. He’s frequently complained of Reid using that tactic. McConnell said extraneous amendments would ultimately fall by the wayside if he threatened to keep lawmakers in Washington to work through them on weekends.

“Amendments go away because people get tired,” McConnell said. “And nobody’s bitter about it because they voluntarily gave up confronted with the choice between staying up late on Thursday night and keeping your previously announced schedule, you decide on balance I’ll offer that amendment up some other time.”

Republicans need to pick up a net six seats in this year’s midterm election to win the Senate majority. But they’ll have to defend 23 seats in 2016 compared to just 10 for Democrats, meaning McConnell could find himself prey to the same temptation as Reid to protect his incumbents from taking tough votes.

Democrats and some outside Senate observers doubt McConnell could actually make the chamber a less partisan place. McConnell himself said the changes would be more behavioral than rules-based, and declined to say whether or not he would undo the “nuclear” option—a rule change invoked by Democrats this year allowing most presidential nomination to get confirmed with just a majority of votes, instead of 60. McConnell, who would benefit from the rules change if majority leader, said “it’s hard to un-ring a bell.”

A Reid spokesman scoffed at McConnell’s talk of cooperation.

“With 540 filibusters under his leadership, Senator McConnell—the self-declared ‘proud guardian of gridlock’—has done more to bring gridlock and obstruction to Washington than any single individual in Senate history,” spokesman Adam Jentelson said in a statement. “Under Senator Reid’s leadership, the Senate has voted on more amendments and on minority amendments at a higher rate than under either of his Republican predecessors, Senators Frist or Lott.” 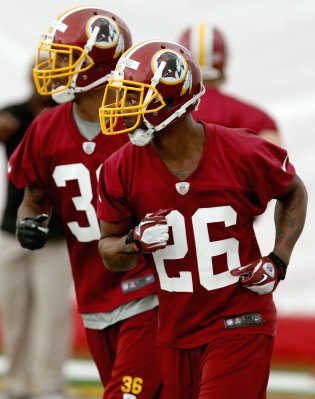 50 Senators Demand Redskins Change Their Name
Next Up: Editor's Pick