Atheists are one of the fastest growing groups in the world. At the same time, the latest Pew poll shows that they’re the most distrusted group in America, and Americans would be less likely to support a Godless presidential candidate than an unfaithful or a pot-smoking one.

These trends don’t contradict each other in the slightest, and I’d argue that the mistrust is both a consequence and a cause of the rapid decline of religiosity in the U.S. Atheism is gaining, steadily and sometimes with remarkable rapidity, and it’s not at all surprising that this rise meets resistance and fear.

As someone who speaks a fair amount at atheist conferences, Americans’ declining religiosity has been vivid over the last few decades: audiences are getting younger, larger and more diverse; there are rapidly rising numbers of new atheist organizations, especially among college-aged students; and atheism is attaining greater respectability and visibility. A large part of the phenomenon is not conversion, but that much–though not all–of the stigma against atheism is fading, allowing many people who had to conceal their beliefs against intense social pressure to finally express themselves openly. America has a long tradition of free thought. Many people who would never have called themselves atheists, including members of my family, were always against traditional organized religion. For those, taking the step to admitting their atheism is relatively small.

But there are many other factors contributing to the recent surge.

The end of the Cold War

There was a time when “godless” was a word inextricably linked to “commie,” when being an atheist was reflexively associated with being an enemy of the state. For most people, it’s now safe to be a patriot and not go to church, but old enmities die slowly and there are still ideologues on the Right who consider “God” and “Country” to be synonymous—and a vast middle ground made uneasy by departures from tradition.

The rise of the Religious Right

The American body politic is deeply polarized, and one of the major forces driving the schism is religion. Many of us now associate religiosity with small-minded pettiness, bigotry, preening egotism and a set of political policies that are worse than medieval (much to the chagrin of my liberal religious friends). Every sanctimonious politician who uses the Bible to advance an absurd policy decision generates a reaction that pushes more people towards atheism. George W. Bush was a great advocate by bad example for the godless, and simultaneously a paragon to the religious. Those who love Bush will dislike atheists, and vice versa—the mistrust is entirely mutual.

We also have seen a rapid rise in the number of atheists in Ireland. This increase is almost certainly a reaction against the atrocious behavior of the Catholic Church in that country. Again, the Pope has been a friend to the godless by supporting odious policies.

A new and aggressive expression of atheism

The early years of the 21st century saw the publication of inspiring and rational polemics against religion by Sam Harris and Richard Dawkins that changed the whole tone of organized atheism. For many years we’ve been preaching to the choir, having conversations within the atheist community between self-identifying atheists, but keeping mostly to ourselves. There is a new dynamic now: we’re not just telling ourselves that our ways are better, but we’re announcing to everyone that God is not good and that religion is folly. That does, of course, antagonize the majority of people of faith.

The world wide web has democratized access to information to a remarkable degree. Where once a community could isolate its members from heretical ideas, now it’s easy and confidential to sit quietly at home and browse sites that disagree vociferously with all kinds of ideas; I can comfortably read about what Baptists and Catholics think, and believers can quickly find atheists expressing themselves. And in a fair and open exchange of ideas, atheism routinely wins the minds (if not the hearts) of citizens.

The Internet is also a boon to isolated individuals. So many people who thought they were alone in their god-fearing communities discovered that there is a thriving culture of free thought online, and acquired a new confidence to come out and join in the conversation.

I am confident that you can expect the trend of declining religiosity to continue for many years to come. There are only a few things that might stop an expanding atheism. One would be the ascendance of liberal religious thought that was accepting of scientific facts and others’ right to believe as they please, and that explicitly divorced its theology from secular concerns. Such religious organizations exist now, but they would have to replace the dominant, strident form of reactionary religion that dominates the discourse today. Second would be that our government could actually return to the promise of the Constitution, end the mutual interference between church and state, and there could be a common attitude that the religious beliefs of political candidates are private and irrelevant to holding office.

Either of those alternatives would greatly slow the growth of atheism. I fear they are unlikely, but even speaking as an atheist, it wouldn’t be so bad if they came to pass.

PZ Myers is a professor of biology at the University of Minnesota, Morris. He was named Humanist of the Year in 2009 by the American Humanist Association and received the International Humanist Award in 2011 from the International Humanist and Ethical Union. He has lectured throughout the world on biology, evolution, atheism and skepticism. His blog, Pharyngula, was named the Best Expert Blog by the Koufax Awards in 2005 and the Best Science Blog by the Weblog Awards in 2006. In 2006, the journal Nature listed Pharyngula as the top-ranked blog by a scientist. His book, The Happy Atheist, is now available in trade paperback from Vintage Books. 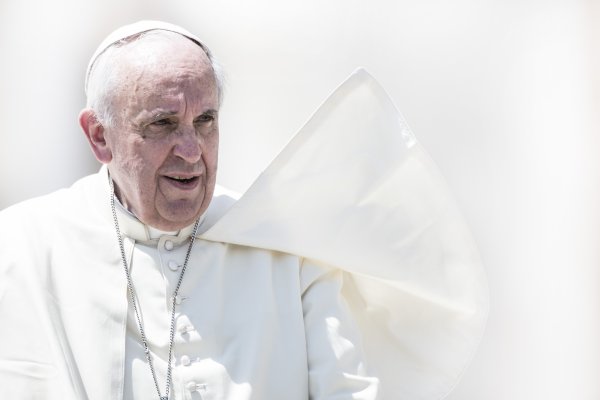 Expect the Unexpected in Pope's Holy Land Trip
Next Up: Editor's Pick