Thailand’s military seized control of the government on Thursday, its Army chief said in a televised address, marking the politically divided Southeast Asian nation’s 12th military coup since the end of absolute monarchy in 1932.

“In the interest of rule and order, we are taking over powers,” said Gen. Prayuth Chan-ocha, the 60-year-old Army chief, during an address broadcast on all television channels. “Please do not panic and carry on with your daily activities.”

The move comes in response to six months of deadlocked political crisis that has led to at least 28 deaths and 700 injuries. Martial law was declared on Tuesday by Prayuth, who at the time insisted he was simply attempting to maintain security amid spiraling unrest. However, it appears his attempts to mediate a resolution have been frustrated. Now, key figures in the government and opposition have been detained at the Army Club in Bangkok. Prayuth said a National Peace Keeping Committee has now taken control of the country.

A 10 p.m. curfew has been announced nationwide and curbs placed on gatherings of more than five people. Soldiers ordered rival protest camps to disperse and those present reported shots fired into the air. Media has been told to stop reporting and television channel taken off air.

The putsch has surprised many, as Prayuth has long shrugged off repeated calls to intervene earlier. And he appeared to be making measured progress.

For the first time since the crisis began in November, leaders from the incumbent Pheu Thai Party, its Red Shirt supporters the United Front for Democracy against Dictatorship, the opposition Democrat Party, anti-government People’s Democratic Reform Committee (PDRC), Senate and the Election Commission were sitting down together for negotiations.

“I want to see every problem settled within this forum before I retire [in September],” he was quoted as saying at the meeting on Wednesday. “I don’t want my juniors to take up this job. If the problem is not solved, I will not retire.”

Thailand’s color-coded factions have been at loggerheads since November, when anti-government protesters took to the streets alleging that Prime Minister Yingluck Shinawatra was just a puppet for her notorious brother, Thaskin Shinawatra, and should step down. On May 7, they finally got their wish, after the nation’s telegenic first female premier was removed from office by the nation’s Constitutional Court on tenuous charges of nepotism.

This brought her supporters, known colloquially as Red Shirts, into the streets as well. Thousands of PDRC and Red Shirts are currently encamped in separate parts of Bangkok. Both groups were planning huge rallies in coming days that would likely have ended in a bloody confrontation. Prayuth’s declaration of martial law at 3 a.m. on Tuesday was ostensibly to prevent any such bloodshed and mediate a truce, although it was always doubtful how successful he could possibly prove.

“He’s a professional soldier and not a politician or a diplomat, and one needs to ask how well-qualified he was for this job [as mediator],” Anthony Davis, a Bangkok-based analyst for defense-and-security-intelligence firm IHS Jane’s, tells TIME.

One man lies at the center of this mess. Thaksin is a divisive figure beloved in Thailand’s populous rice-farming north and northeast but loathed by royalists and urban elites, who are traditionally aligned with the military. The billionaire telecoms mogul was himself ousted in a military coup in 2006 and now lives in self-imposed exile, mainly in Dubai, after being convicted of corruption and abuse of power—charges he insists are politically motivated.

Thaksin’s supporters, seething by what they perceived as his illegitimate ouster at the hands of the establishment, descended upon Bangkok in the thousands to demand change. In May 2010, a crackdown was launched by then Prime Minister Abhisit Vejjajiva and Deputy Prime Minister Suthep Thaungsuban, who now enjoys a coda as firebrand leader of the antigovernment PDRC (and has just been detained by Prayuth).

Prayuth took charge of the military just four months after this crackdown. It was a gruesome affair. Tanks rolled into central Bangkok and shadowy “men in black” picked off civilians. More than 90 people were killed and 2,000 people injured. According to a subsequent investigation, at least five unarmed men and one woman were shot by soldiers while sheltering in a Buddhist temple.

At the time, the military was blighted by serious schisms and factions. While the top brass bridges both sides of the political divide, the rank and file disproportionately hail from the Thaskin-supporting north and northeast, and were horrified to see their comrades open fire on their kith and kin.

The institution Prayuth inherited was in disarray. He criticized the 2006 military coup that ousted Thaksin and voiced reservations regarding the 2010 crackdown. (Incidentally, his recent imposition of martial law came one day after the fourth anniversary of that bloodshed.)

Prayuth’s tenure began a significant turnaround; cleanup efforts following decimating floods that claimed 815 lives and afflicted 13.6 million people in 2011 earned renewed respect for those in fatigues. When the current unrest broke out in November, soldiers administered first aid and shepherded the injured out of harm’s way. Not a rifle was raised by anyone in uniform. Prayuth then mediated the first — albeit fruitless — discussions between Suthep and Yingluck.

Born in Nakhon Ratchasima province northeast of Bangkok — notably, within the agrarian boondocks known as Isaan where Thaksin now maintains fervent support — Prayuth was neither of blue blood nor military stock. A career soldier, after graduation from military academy, his formative years were spent in the 21st Infantry Regiment of the 2nd Infantry Division, know as the King’s Guard.

As a young officer, Prayuth won the Ramathipodi medal, Thailand’s top honor for gallantry in the field, while deployed on counter-insurgency missions. After rising to command the prestigious King’s Guard, he took control of the 2nd Infantry Division by the restive Cambodian border.

Having taken charge of Bangkok and surrounding environs in the autumn of 2006, his stock rose further with several more promotions. He also strengthened ties with the royal household. This quickly earned him the nickname of Sarit Noi, or Little Sarit, in tribute to Field Marshal Sarit Thanarat. Also born in Isaan, Sarit seized power through a putsch in 1957 and brutally cracked down on any left-leaning dissension until his death six years later, raising the monarchy to its paramount role still enjoyed in contemporary Thai society.

Prayuth now appears to have taken this comparison to new heights. Just four months before his obligatory retirement, he has himself switched tactics and staged a coup of his own. Thailand must now see what he wants his legacy to be. 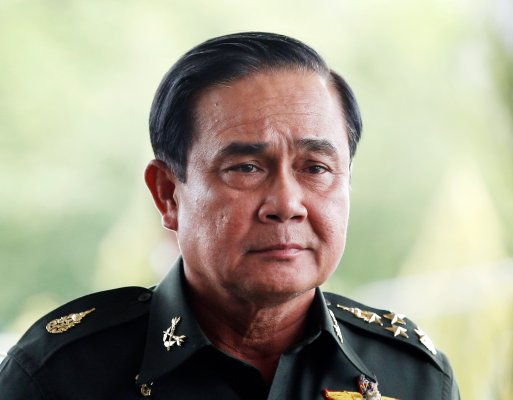