I feel so lucky to be married to my lovely wife Cassandra that I spend a lot of time worrying about how I’d deal with the devastation if she left me. Would I date a high-powered executive who could further my career? Sleep around with famous actresses? Famous models? Aspiring actress-models?

Thanks to an app called Tinder, the most powerful hookup tool invented since fermentation, I could now answer this question. While single people are pretending to listen to you talk about your children, they’re casually using Tinder to swipe through photos of hundreds of people located within a few miles, messaging with anyone who likes them back. So I too can log on and see my parallel sexual universe. Before this technology, you couldn’t do that without some kind of magic potion that would allow you to remove your wedding ring, enter a bar and talk to people.

Almost as much as I wanted to know how I would fare, I was curious about Cassandra’s potential dating life. I needed reassurance that if something happened to me, there’d be some nice, extremely old man who’d let her take care of him. Also, getting her to go on Tinder was the only way I could possibly get away with this.

Since Tinder works through Facebook, Cassandra and I logged onto our accounts and got virtually divorced, which was very virtually sad. Then Cassandra spent a long time picking out and cropping four photos of herself, one of which she cut me out of, which I thought was tacky. She also spent more time writing her bio than I spent on this column. At one point she went with “My husband left me for a woman who is half my age with giant boobs. Please love me. I don’t require much. Just a hug once a week. Also, I have cats” before settling on a long, far sexier list of phrases that described her, such as “eye roller,” “Vespa rider” and “steel-town girl on a Saturday night.”

Then she started swiping through 40-to-50-year-old men living within 12 miles. She immediately started making noises as if she were smelling rotting food held by ugly men. “Uch! Look at these people! I can’t even [have an intimate relationship with] these people!” she yelled. Reasons for being un-intimate-relationshipable included: holding a beer, posing next to a woman who is not your mom, being shirtless, standing on a boat, playing a sport, attending a sport, wearing sports clothing, asking “to be inspired,” looking like you “definitely killed somebody” and holding a movie camera like a director. Cassandra has apparently upped her standards a lot since college, when she dated a guy who didn’t use deodorant.

I, meanwhile, was finding tons of really fascinating women. I was also learning a lot about the opposite sex. Nearly every woman needed to tell me she liked yoga, despite the fact that I already knew that, since she’s a woman. Also, I was surprised that at some point most women approach someone and say, “Hey, would you mind standing 10 feet back and taking a photo of me doing a complicated yoga pose?” I learned that all women love animals. They also enjoy getting tarted up, going out in large groups, standing in a row and making the same face in a way that makes it look like they’re holding pom-poms.

Within an hour, though, Cassandra’s phone had buzzed with nine matches, whereas I had only two, and one was a woman I’d interviewed for another column who figured I was writing about Tinder. After two hours, I told Cassandra it was time to go to sleep. “No. Don’t take it away,” she said. “I’m going to go on a date with Jebba in his private plane.” By the next night, I was up to 19 matches. But when I went to brag to Cassandra, I discovered she had more than 40 new admirers, including a yogi lawyer who was doing handstands in three of his six photos. She was erasing anyone whose pickup lines were too lame. “‘Hi Cass. I’m John,” she read, laughing. “So boring. Another one: ‘Hello, Cassandra.’ Lame!”

The balance of power in our marriage had shifted. “This was a really sweet way for you to boost my self-esteem,” Cassandra said. “I felt like a middle-aged mom with no game, and now I feel like I have game. It’s inspiring. Maybe I shouldn’t just gain 20 pounds and give up on life. If I put a little effort into working out again, maybe I could be somebody.”

We erased the Tinder app from our phones, and I happily changed my Facebook status back to married. But not Cassandra. “I’ll do that tomorrow. I have to do a couple of other things on Facebook,” she said. I didn’t push. I know I’m one fight away from losing her to a yogi lawyer. 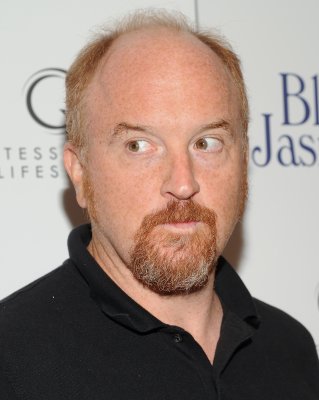 Do We Really Prefer Louis CK's Take on Womanhood to an Actual Woman's?
Next Up: Editor's Pick