Urumqi does not want for cops. The capital of the Xinjiang Uighur Autonomous Region, in China’s far northwest, is well-guarded. Riot trucks cruise city streets. Armed police stand vigil over Friday prayers. And following a deadly attack last month, the city’s railway station feels like a fortress. But none of this, it seems, has stopped the violence.

At around 7:50 a.m. Thursday two “cross-country” vehicles collided on a street near Renmin Park, about 4km from the city’s main square, sending fire and smoke shooting into the sky, according to state media reports. Witnesses told local press they heard a series of explosions and saw blazing plumes stretching one-story high. Photographs from the scene show shattered market stalls, toppled piles of produce, and bodies lining the road. Police say at least 31 people were killed.

The explosion hit the city at what is usually a quiet, restful time. China officially has one time zone, a fact that is at odds with longitudinal realities. To account for this, people in Xinjiang use both “Beijing time” and “Xinjiang time,” which is two hours behind. Ten to eight in the morning, Beijing time, is effectively 5:50 a.m. to the locals. At this hour, it’s usually only shopkeepers and the elderly who are milling about.

The early-morning chaos comes just weeks after a brutal and bloody attack at an Urumqi railway station. On April 30, a bomb and knife attack at the city’s southern train terminal left three dead — two of them attackers — and 79 injured. Several people have since been arrested in connection with that attack. Although few details have been released, authorities say they were motivated by extremism.

It will probably be days or weeks before we know what exactly happened. The authorities keep a tight lid on information about potentially sensitive subjects, and few subjects are more sensitive right now than the specter of unrest, or terrorism, in Xinjiang.

The vast homeland of the Turkic-speaking, mostly Muslim Uighur people has seen a rise in violence in recent years attributed, depending on who you ask, to religious extremism, separatism, or as a reaction to forceful religious and social oppression by the ruling Chinese Communist Party. Many Uighurs feel overwhelmed by the pace of immigration to Xinjiang of China’s ethnic Han majority, with Urumqi now a majority Han city.

For decades, a small minority has waged a campaign against the Chinese government, usually targeting symbols of state power in Xinjiang, including government buildings and police stations.

The violence seems to be spreading. Last fall, a truck plowed through crowds of tourists in Beijing’s Tiananmen square, killing two and injuring dozens. Chinese authorities said the vehicle was driven by Uighur separatists, although few details have been released about the assailants — a man, his wife and his mother. In March, a group of knife-wielding attackers slashed and stabbed their way through a train station in Kunming, the capital of Yunnan province, killing 29. Chinese authorities identified the group as separatists from Xinjiang.

All this has prompted the ruling Chinese Communist Party to tighten its already firm hold on the territory. In a visit to Xinjiang last month, President Xi Jinping promised a “strike first” policy and called police officers, who are disproportionately Han Chinese, the “fists and daggers” in the country’s fight against terrorism and separatism. “Sweat more in peacetime to bleed less in wartime,” he reportedly advised.

By last weekend, the police were omnipresent. In Hotan, a dusty city in Xinjiang’s southwest, there were police trucks on each block of the city’s center. Roads to outlying towns and villages were blocked by checkpoints. In the otherwise laid-back and leafy capital, life continues apace, albeit in the presence of armed men. At Urumqi’s southern railway station — which is itself flanked by police stations — men with automatic weapons meet passengers at the ticket gate.

The show of force is mighty, but on this awful morning, you have to wonder if anyone feels safe. 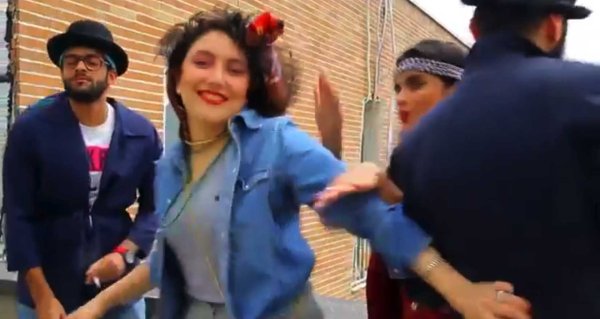 Iran Frees Some Who Danced to Pharrell's 'Happy'
Next Up: Editor's Pick