The U.S. Is Finally Making a Friend of Vietnam

A mother takes a picture of her daughter in front of the Golden Arches during the opening ceremony of Vietnam's first McDonald's restaurant in Ho Chi Minh City on Feb. 8, 2014
AFP—AFP/Getty Images
By David Stout

A few years ago I traveled from Hanoi to Saigon by train during Vietnam’s national holiday to commemorate the end of the “Anti-American Imperialism War.” Along the way, I stopped by numerous battlefields that many young American men from my father’s generation had hoped to avoid. Over the course of the first evening in the meal car, my fellow travelers — mostly former Vietnamese soldiers heading south to pay respects to their fallen comrades — shared rice wine with me to mark our new friendship. As we raised our glasses, my hosts made boisterous toasts to the improved relations between our countries. “To Ho Chi Minh!” “To Obama!” “To Forrest Gump!” The Vietnam War was not forgotten, but there was a sense that the bitterness of the past had long since subsided.

When the U.S. first deployed combat advisers to Indochina in the early 1960s, the military buildup in southern Vietnam was largely predicated on bridling the expansion of communism in Southeast Asia, particularly that propagated by China. Today, while China has become a de facto capitalist nation, it remains authoritarian and is increasingly hawkish. So once again, Washington seeks to contain the Middle Kingdom. Though this time, it’s primarily through the Obama Administration’s “pivot” to Asia, and the U.S. may have a new and willing partner: former foe Vietnam.

Shortly after its conflict with the U.S. ended, Vietnam fought a brief but bloody war with China in 1979 that killed some 50,000 people. Since then, relations between the two have been, if not friendly, at least courteous. As China has risen as a growing global power, the leaders in Hanoi have sought Beijing’s guidance on how to modernize and tried to model their country after China.

But now Vietnam and China are again at loggerheads, this time over Beijing’s claim to vast swaths of the South China Sea, sparking maritime disputes not just with Hanoi but other Asian governments. What had been a slow burn flared earlier this month when China provocatively moved a massive state-owned oil platform well within Vietnam’s exclusive economic zone. Naval vessels from both sides engaged without firing and then withdrew. But back in Vietnam, the reaction was explosive. Hundreds of factories thought to be Chinese-owned were razed in the industrial parks north of Ho Chi Minh City and Ha Tinh. An unspecified number of Chinese nationals were reportedly killed, prompting Beijing to send a small armada to Vietnam on May 19 to evacuate any of its citizens wanting to leave. On Thursday, Vietnam’s Prime Minister Nguyen Tan Dung said Hanoi was reviewing all its defense options, including legal recourse under international law.

Many Asian countries welcome the U.S. pivot as a counterweight to China. While most are old American friends like Japan, South Korea and the Philippines, Vietnam is a striking new partner. Ties have steadily improved over the years. Today, the U.S. is Vietnam’s third biggest trading partner and its largest export market. High-level visits from the likes of then U.S. Secretary of Defense Leon Panetta and myriad defense memorandums have smoothed the way for stronger ties. In July the two governments inked the U.S.-Vietnam Comprehensive Partnership, aimed at boosting bilateral relations in several sectors, including “defense and security.”

“Washington sees Vietnam as the most strategic-thinking of all the ASEAN countries,” says Ernest Bower, Southeast Asia expert at the Center for Strategic and International Studies. “Vietnam has stepped up its game in amazing ways over the last five years. It’s incredible.”

The U.S. still has a 30-year-old arms embargo in place against Vietnam, but perhaps not for long. “It’s our assessment that U.S.-Vietnam ties have been steadily improving in recent years to the point that a lifting of the arms embargo is now conceivable,” says James Hardy, the Asia-Pacific editor at IHS Jane’s Defence Weekly.

Nearly 40 years ago, the U.S. fled Vietnam in abject humiliation — symbolized most potently by the hasty exit by helicopter of American personnel from the embassy’s rooftop in Saigon. But in 2014, the U.S. looks increasingly less like the foe and more like the friend. 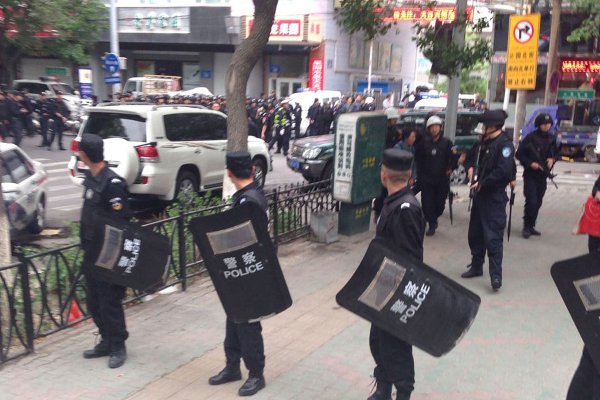 Chinese City on Lockdown After Deadly Blast
Next Up: Editor's Pick