Senator John McCain: "We Are All Ukrainians"

Sen. John McCain, R-Ariz., left, and Sen. Tom Harkin, D-Iowa, right, and other senators come and go from the chamber during votes at the Capitol in Washington, Tuesday, Feb. 25, 2014.
J. Scott Applewhite—AP
By Jay Newton-Small

In response to reports of a Russian takeover in parts of Crimea, Arizona Senator John McCain declared Friday, “We are all Ukrainians,” before calling for swift U.S. economic aide to Ukraine, new moves to condemn Russia at the United Nations, sanctions against Russian officials and the installation of U.S. missiles in the nearby Czech Republic as a show of American regional strength.

Russian President Vladimir Putin believes “this is a chess match reminiscent of the Cold War and we need to realize that and act accordingly,” McCain said, in an exclusive interview with TIME. “That does not mean I envision a conflict with Russia, but we need to take certain measures that would convince Putin that there is a very high cost to actions that he is taking now.”

The comments echoed McCain’s 2008 statement, “We are all Georgians,” which he made as a Republican candidate for President after Russia invaded Georgia. Six years later, McCain says he feels the same about the plight of Ukraine. “We are all Ukrainians in the respect that we have a sovereign nation that is again with international boundaries… that is again being taken in as part of Russia,” he said in an interview in his Senate office. “That is not acceptable to an America that stands up for the rights of human beings. We are Georgians. And we are Ukrainians.”

Leaders of the newly formed Ukrainian government say Russian forces moved into Crimea’s two airports and parts of the province’s capital of Simferopol early Friday, though the troops wore no insignia. The Russia has an historic military presence in the province. The incursion comes after pro-Russian Ukrainian President Viktor Yanukovych fled to Russia in fear of his life after pro-European opposition groups in parliament voted to oust him. Ukraine has been torn part by violent protests since Yanukovych walked away from a trade pact with Europe in November and sought a bail out from Putin.

In the interview Friday, McCain said President Obama has “been incredibly naïve” about Putin’s goals. “Putin wants to restore the Russian empire, that’s his ambition, he’s stated it many times. Therefore no one should be surprised,” McCain said. “I predicted it and I’m not a genius. But I know Putin.”

McCain says he wants to see the Obama Administration move a short-term economic aid package for Ukraine as quickly as possible. Kiev is “on the verge of an economic collapse. That would give credibility to the new government,” he says. The U.S. should also be working on a long-term International Monetary Fund bailout for the Ukraine, McCain says.

On the military front, McCain believes Putin needs to face a show of U.S. strength. Putin is “convinced that the United States is weak and there’ll be no significant retaliation of his occupation of the Crimea and possibly eastern Ukraine,” he says. He wants to see Obama revive the Bush era missile defense plan, which would have placed U.S. missiles in the Czech Republic. He also believes that speeding up Georgia accession to NATO would send a strong message to Putin.

McCain would like to see the U.S. introduce resolutions in the United Nations Security Council condemning the violence in eastern Ukraine and approving an international response, though “obviously they’d be vetoed” as Russia is one of the five permanent members of that council, he says.

McCain also supports expanding the Magnitsky Act to allow the U.S. to bar certain Russian individuals involved in any incursion in Crimea and Ukraine from getting U.S. visas and doing work with U.S. citizens. That law was passed in 2012 in response to the 2009 death of lawyer Segei Magnitsky in a Moscow prison while he was investigating fraud and corruption involving Russian tax officials.

Finally, McCain said Obama needs to be braver in his foreign policy, citing Ronald Reagan’s declaration that all Americans stand with Israeli human rights activist Natan Sharansky, who spent nine years in a Russian gulag starting in 1977 on accusations of spying. Reagan “took a beating for saying it, but it reverberated every where, other than the gulag.”

“So, what I’m saying is: ‘Ask not for whom the bell tolls,’” McCain continued with a wink, paraphrasing the famous John Donne line about the interconnectedness and mutual responsibilities of humanity. 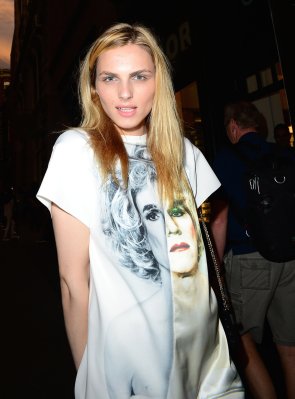 Supermodel Andreja Pejic on the Reaction to Her Gender Transition
Next Up: Editor's Pick