The Making of the One World Trade Center Panorama

Bruce Springsteen got it right when he called his magnificent album of post-9/11 songs The Rising. The title track acknowledges the heartbreaking strangeness of the empty sky above lower Manhattan after the Twin Towers fell. “Sky full of longing and emptiness,” he calls it. But then he sings about the new sky the rising will bring: “Sky of fullness, sky of blessed life.” With the near completion of 1 World Trade, the rising has happened and that sky is back.

With that prospect in mind, last year TIME entered into negotiations with the Port Authority of New York and New Jersey, the regional agency that built the original World Trade Center and likewise owns the new one, to gain exclusive access to the antenna-spire that tops the new tower. Our aim was to take an unprecedented 360-degree interactive image from the topmost point of what is now the tallest building in the western hemisphere.

After months of back and forth, we were granted access. Then TIME partnered with Gigapan, a tech startup based in Portland, Ore. Beginning with crude bar-napkin sketches and eventually moving to mechanical engineers working in AutoCAD and then to welders in Asheville, N.C., an eight-month process of design and construction resulted in a 13-ft.-long aluminum jib calibrated to adhere to the base of the beacon at the top of the tower’s 408-ft. spire. To that rotating arm was attached a Canon 5D Mark II with a 100-mm lens. Over a five-hour span of orbital shooting on Sept. 28, 2013, the camera produced 567 pictures that were then stitched together digitally into a single massive—and zoomable—image of everything the eye can see in all directions. This is how that amazing image came to be.

See the image and read the full story. 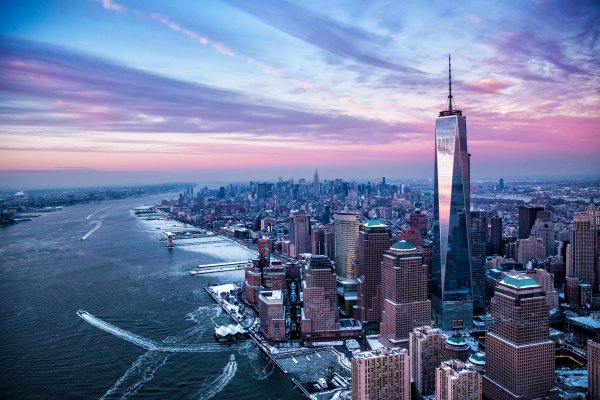 View from the Top
Next Up: Editor's Pick