A few days after Haim played two sold-out, high-energy shows at Terminal 5 in New York City, 22-year-old Alana Haim admitted she and sisters Danielle, 25, and Este, 28, lead remarkably tame lives off stage. Haim isn’t the most raucous band on the road right now — they prefer watching movies to partying on their bus, they say — but it might be the hardest-working. They’ve been touring practically non-stop for the past year, and though they released their critically acclaimed debut, Days Are Gone, last September after six years of being in a band, they’re already writing their next record. TIME caught up with Alana to talk about the band’s success, life on the road and her love of the Spice Girls.

Alana Haim: Nothing really crazy happens on tours! The craziest part is that we’re in the U.S. Is that weird? We haven’t been in the U.S. for like two years because we’ve been in Europe. When we were getting ready to do this tour, I was like, “I hope people still remember who we are!” But we’re pretty subdued on tour. We’re not a big crazy band.

On stage, you give the opposite impression.

The problem is our immune systems actually hate us. We can’t do anything on tour because we’re afraid we’re going to get sick. It’s all from our parents. Growing up, getting sick was like the world was ending. We’re the chillest rock stars of all time. All we do after a show is chill in our bus and watch movies.

Songs like “My Song 5” and “Days Are Gone” aren’t your usual guitar-based pop. Were they hard songs to adapt live?

All of the tracks on our records are really dense and have these crazy sounds. They’re really full of different things, and that was the hardest thing, to pick and choose what we could play. Believe me, if I had two extra hands, life would be a million times easier for me.

But you already do so much — keyboards, guitars, drums, singing.

They call me Merlin. That’s my nickname. My wizard station has a million things on it. But that’s the fun part — I’m never bored on stage.

During one song, you told the audience to put down their phones and live in the moment. Are concert-goers today too busy Instagramming and Snapchatting?

I don’t think it’s a problem. There was a girl in the front row, and she yawned and was texting. I was like, why are you even here? You seem so unenthused! Obviously you got here early to be in the front row. When I go to shows, the last thing I want to do is text someone, unless I’m texting someone “My face is getting melted right now.” It’s kind of like the ADD age — we can’t sit and listen to music anymore.

Before Days Are Gone came out, a lot of people made Fleetwood Mac comparisons and fixated on 1970s rock influences. Did you know you were going to surprise them with some unexpected sounds?

I don’t think it was our intention to completely surprise people. With “My Song 5” and “Days Are Gone,” we had written them in the studio. We were like, “Oh God, are these songs too different from the other songs?” And finally we realized if we like the song, it’s going on the record, and we don’t give a sh-t. It’s awesome because “My Song 5” is the biggest song live. Everyone loves that song live. Everyone knows that song, everyone sings along, which is cool because in the studio, we were freaking out.

Do you think Days Are Gone is a breakup album?

I feel like, if it was a breakup album, I would listen to it and feel sad, and I don’t really feel like it’s a sad album. Days Are Gone is more of a record that explains the past six years of our lives. Some of the songs we wrote in 2008, some of the songs we wrote a year ago. It’s the story of me, Este and Danielle growing up at different points in our lives. A lot of people have come up to me and said, “This song got me through a rough breakup,” which is so rad, because when I’m going through a sad breakup, I always listen to Tom Petty’s “You Got Lucky.” That’s my get-over-a-broken-heart song because it’s such a f-ck-you song. To write a song that other people go through to get through the day? It’s an honor.

I’d guess that mish-mash of experiences accurately captures the messiness of breakups.

The record is all about what we went through and what our friends went through. Some songs that seem like breakups aren’t even really about breakups. But I think the craziest thing for us is that we put out Days Are Gone. We’ve been a band for six years, almost seven, and we’d never put out a debut record. It’s kind of a running joke — our next record is going to come out in 2020! But it’s not. It’s definitely coming soon.

Will there be more dance routines with the new album?

Oh my God, I hope so. We love dancing so much. I mean, I’m not going to lie, the “If I Could Change Your Mind” video was the craziest music video to shoot. We haven’t danced together since we were really little, and we totally walked into it thinking we were pros. [Veteran choreographer] Fatima [Robinson] definitely f-cking whipped our asses into shape for sure. We only had three days to choreograph it and perform. We really wanted to be actual dancers. I mean, we’re not actual dancers — we quickly realized that after day one.

The reason why I’m Baby Haim is because I was the biggest Spice Girls fan growing up. I always wanted to be Baby Spice growing up, but I didn’t have blond hair. When I was 16, one of my friends was like, “You’re Baby Haim, you’re the baby of the family!” and I was like, “Oh my God, dream come true, I can be like Baby Spice.” They were the first band I was a fanatic [for]. It was Spice Girls and Destiny’s Child, my two go-to bands. I had all the dolls, all the weird lollipops, all the movies. I was a f-cking huge Spice Girls fan, and I am not afraid to say it.

You shouldn’t be! I was a big Spice Girls fan then too.

It was the best time! The f-cking late-90s? F-cking killing it! The TRL age. We were the last true age at MTV. Isn’t that sad?

That is kind of depressing.

We were the last age where we could coherently watch TRL and get it. It’s really sad.

What would Spice names would you give Este and Danielle?

Este would definitely be Scary Spice, of course, that’s what she’s always was. And Danielle would be Posh for sure.

The three of you have had such a massive year. Have you processed it all?

I can’t believe that this is my job right now. I used to work at Crossroads Trading Co., the clothing store, and now I’m in Canada! This is the time I’m going to look back on when I’m 90 and go, okay, when I was 22, I was living the dream.

You mentioned you’re already working on new music — what can you tell me?

We started writing a little bit on this tour. We have a little set-up in our bus. This is the fun time when we get to play around and figure out what the next record is going to sound like. Last festival season we were finishing the record. Instead of going out and exploring, we were in our dressing rooms listening on headphones and approving things. This year is kind of our year to actually experience what we’re doing because we really didn’t get a chance to do that so far.

After your tour wraps up in August, you have some rare down time. Any plans?

Definitely catch up on TV. But when we get home, I think we’re going to go straight into recording and new music. Vacation time scares me. The second I’m on vacation, I’m going to be like, “Oh my God, I’m wasting my time, I need to start working again.” 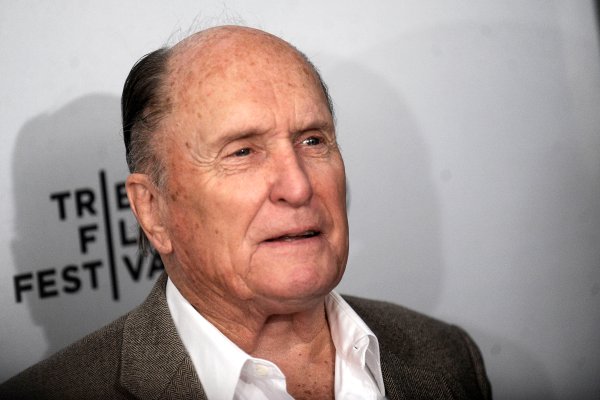 Robert Duvall on How Hollywood Has Changed
Next Up: Editor's Pick