A Thai soldier mans a machine gun in central Bangkok on May 20, 2014
Chaiwat Subprasom—Reuters
By Charlie Campbell

An uneasy calm has settled over Bangkok, after the military’s declaration of martial law over the entire nation, with passersby stopping to take selfies with soldiers and businesses operating as normal.

But government supporters and some analysts are slamming the army’s move as a coup d’état, even as the military insists that it is merely restoring “peace and order for people from all sides” in the country’s ongoing political crisis.

“The public do not need to panic but can still live their lives as normal — this is not a coup,” said an announcer Tuesday on military-run television, while soldiers took up positions at key intersections in the tourist-thronged Thai capital.

However, Pavin Chachavalpongpun, associate professor at the Centre for Southeast Asian Studies at Kyoto University, says, “I think you can call this a coup … because this is about taking away power from the people, taking control of the political situation and human rights.”

Military intervention is endemic in Thailand. Since the end of absolute monarchy in 1932, the country has seen 11 successful coups, 23 military governments and nine military-dominated governments. The current coup, Pavin says, “is a move preserving the political position of the country’s elite.”

While Yellow Shirt antigovernment protesters — a mostly royalist and middle-class group led by the People’s Democratic Reform Committee — have been celebrating, progovernment supporters, or Red Shirts, are outraged.

“Martial law must be [imposed on] a specific area, but this is the first time the army commander declared the whole country under martial law, so this is a special kind of coup d’état,” says Weng Tojirakarn, a leader of the United Front for Democracy Against Dictatorship (UDD), the principal Red Shirt organization.

Thailand has been in constitutional crisis since the present round of antigovernment protests erupted in November. Prime Minister Yingluck called elections for Feb. 2 in a bid to claim a fresh mandate, but these were boycotted by the main opposition Democrat Party and subsequently annulled. Then, on May 7, the nation’s Constitutional Court ousted Yingluck on charges of nepotism and abuse of power.

New polls called for July 20 remain in doubt and pro- and antigovernment supporters have amassed at sites in the capital just 25 km apart.

Over the past six months, at least 25 people have been killed and 700 injured in sporadic street violence. Nevertheless, for martial law to be declared, Thailand must be facing perils threatening the survival of the nation, says Sunai Phasuk, senior researcher for Human Rights Watch.

“I cannot see any concrete, convincing evidence of such a threat. There are not enough violent incidents to threaten a collapse of even Bangkok, let alone the entire country,” he says. “There are no grounds that can justify the taking over of power by the military.”

Antigovernment protesters want an appointed administration to enact reforms that will neuter the Shinawatra clan as a political force. But supporters of the family, mainly rural voters based in the north and northeast, are insisting that elections take place.

“We must protect our democratic system but we insist on our nonviolent methods,” says Weng. “We want a political system according to the Constitution [that says elections must be held].”

Thai army chief General Prayuth Chan-ocha called a meeting of the heads of government departments for Tuesday to map a way forward. He has said that power remains in the hands of the present interim administration. However, acting Prime Minister Niwattumrong Boonsongpaisan is already facing challenges from a group of Senators, who have proposed the setting up of a new unelected government.

Ministers also say they were not informed of the army’s plans before the announcement of martial law on television at 3 a.m. Neither the police nor other uniformed services were briefed either, creating the suspicion that this was a unilateral action by a military clique. “There is some kind of factionalism, fragmentation within the military, so I think this has been the decision of Prayuth and his inner circle,” says Pavin.

Regardless of what comes out of Tuesday’s meeting, martial law will likely remain for some time. It can be relinquished by a royal decree, but the beloved monarch Bhumibol Adulyadej is 86 years old and ailing, relying heavily on advisers.

The army has meanwhile called on media not to broadcast material that would affect national security, and several television stations have been taken off air. The UDD remains defiant, however, and says that its channel will remain live. If the military wants to shut it down, “They must come here and they must open fire on us,” says Weng.

Thailand’s economy is reeling from the protracted crisis. The National Economic and Social Development Board said Monday that GDP shrank 0.6% in the three months through March from a year earlier.

Foreign governments have expressed their concern over Tuesday’s developments. “We expect the Army to honor its commitment to make this a temporary action to prevent violence, and to not undermine democratic institutions,” U.S. State Department spokeswoman Jen Psaki said in a statement.

The Australian government said that it encouraged “all parties to resolve their political differences through peaceful democratic processes.” 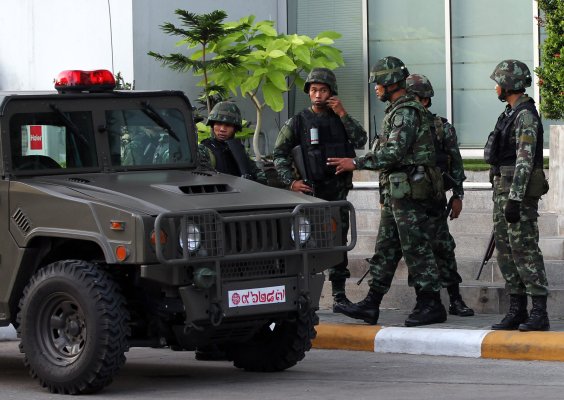