'Indonesia's Obama' Is Actually Nothing of the Sort

Indonesian presidential candidate Joko Widodo waves to a crowd of supporters after officially naming Jusuf Kalla as his vice-presidential running mate in Jakarta on May 19, 2014
Ed Wray—Getty Images
By Yenni Kwok

Joko Widodo, the front runner in the Indonesian presidential election, is often compared to U.S. President Barack Obama. At 52 years old, both are relatively young politicians whose can-do spirit has won legions of fans and energized voters in their own countries. And just as the American leader has been, Joko is also the target of a smear campaign.

Last weekend, to quell rumors that he’s not a Muslim and of Chinese descent, his party, the Indonesian Democratic Party–Struggle (PDI-P), posted on Facebook a photo of Joko’s marriage certificate, complete with details of his religion and his father’s name — mirroring the White House’s release of Obama’s long-form birth certificate after persistent rumors that he was born in Kenya and not a U.S. citizen.

But that’s pretty much where the similarities end.

Joko, popularly known as Jokowi, announced his running mate on Monday, a day before the May 20 registration deadline, ending weeks of speculation. The choice: Jusuf Kalla, a seasoned politician and onetime chairman of the influential Golkar Party. Kalla, 72, is expected to help Jokowi and complement the Jakarta governor’s lack of experience in the rough-and-tumble of national politics — to be the Indonesian Joe Biden, if you will.

But the announcement has left some, if not many, of Jokowi’s supporters more disappointed than surprised. For one, Kalla is no Biden. When he served as Vice President during outgoing President Yudhoyono’s first term in office, from 2004 to 2009, there were signs, allegedly, of rivalry between the two. In an ongoing trial — concerning the funneling of funds during the 2008 global financial crisis to Indonesia’s Century Bank as part of a bailout package — Kalla gave testimony against actions taken by the Yudhoyono government. And the former veep’s appearance in the award-winning documentary The Act of Killing, in which he was seen praising a thuggish paramilitary group, whose members killed suspected communists in the 1960s, has done nothing to further his image.

Also, while Obama had a free hand to pick his VP candidate, Kalla is said to not be the choice of Jokowi but rather of his party’s chairwoman, Megawati Sukarnoputri. The presidential candidate hinted as much during his speech Monday: “Based on special considerations, considerations from Megawati Sukarnoputri, last night we decided that my vice-presidential candidate would be Muhammad Jusuf Kalla.” (Megawati had already put Jokowi in his place in a speech the previous Friday: “I made you [Jokowi] a presidential candidate,” she said. “But you should remember that you are the party’s official, with a function of implementing the party’s programs and ideology.”)

Sixteen years after the fall of authoritarian President Suharto on May 21, 1998, Indonesia has seen the rise of young leaders who earn public respect for pushing clean and effective governance in a country blighted by graft. Besides Jokowi, whose habit of making blusukan (impromptu visits) has endeared him to voters since his time as the mayor of the small central Javanese city of Solo, there are: Basuki Tjahaja Purnama, Jakarta’s deputy governor; Tri Rismaharini, the mayor of Indonesia’s second largest city, Surabaya; Ridwan Kamil, the mayor of the West Javanese capital and the country’s third most populous city, Bandung; and Ganjar Pranowo, the governor of Central Java province.

Yet this new breed of politicians is still at the mercy of party oligarchs, some of whom are remnants from the Suharto era. Party leaders and founders like Megawati treat their organizations like personal fiefdoms, having the final say on the selection of everyone from presidential candidates to deputies of regional leaders. Sometimes the pairings work (Jokowi and Basuki, who belongs to the Gerindra Party, have formed a good team as leaders of Indonesia’s capital city). At other times, it’s a disaster: Rismaharini contemplated stepping down in February, partly because she was allegedly fed up with the inability to work with her PDI-P–appointed new deputy mayor.

For the July 9 election, Jokowi is facing rival Prabowo Subianto, a Gerindra Party co-founder. Prabowo, former son-in-law of the late Suharto and an ex-general with a dubious human-rights record, has chosen to team up with Hatta Rajasa, whose daughter is married to Yudhoyono’s son. Though Jokowi, a clean nonestablishment figure, is the front runner, Prabowo has gained ground in a new opinion poll.

“A fight against the oligarchs,” tweeted anticorruption activist Teten Masduki, who supports Jokowi, on Sunday, a day before the Kalla announcement. But as election day approaches, and coalition parties begin jockeying for advantage, the presidential race may turn into a fight among party oligarchs, not against them. 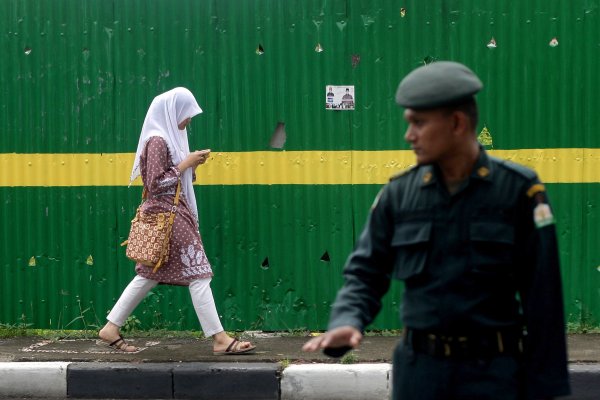