California Chrome during the 139th running of the Preakness Stakes at Pimlico Race Course in Baltimore on May 17, 2014
Rob Carr—Getty Images
By Sean Gregory

On Sunday night, Jeff Blea, president of the American Association of Equine Practitioners and one of the most respected horse-racing vets in the country, was watching the local news at his home in the Los Angeles area. He spotted an alert going across the ticker at the bottom of the screen: California Chrome may not run Belmont, giving up his bid for the Triple Crown. “Oh jeez,” Blea thought. He expected the worst. Maybe the horse had suffered a career-ending injury.

But then Blea’s wife Googled the news. Instantly, worry and despair were replaced by bemusement and frustration. Art Sherman, the trainer for California Chrome, was protesting New York’s ban on equine nasal strips — yes, equine nasal strips — and hinted that if New York racing officials didn’t change their stance, California Chrome could sit out the June 7 Belmont Stakes. The colt is on a six-race winning streak while wearing the adhesives. “I just shook my head,” Blea said. This is such a nonissue, he thought. And it needs to be resolved.

Luckily, the New York Racing Association (NYRA) did just that on Monday, lifting the nasal-strip restriction for this year’s Belmont Stakes. Sure, California Chrome’s crew was probably bluffing: Were the co-owners Perry Martin and Steve Coburn, along with trainer Sherman and jockey Victor Espinoza, going to give up a chance at history to defend something that keeps grandpa from snoring?

But by lifting the restriction, NYRA avoided a possible three-week standoff over a nonsensical rule. At a time when horse racing should be anticipating history — since Affirmed won the last Triple Crown in 1978, California Chrome has become the 13th horse to win the both the Kentucky Derby and Preakness Stakes — it was the last fight the struggling sport needed.

Ugly doping scandals, which often result in fatal results for the thoroughbreds, have plagued racing over the past few years. California Chrome, a horse bred off an initial $10,000 investment by its co-owners — one of whom, Coburn, bears a striking resemblance to actor Wilford Brimley — offers a rare chance for the industry to shine. Though on Tuesday night, HBO will interrupt this feel-good tale with a special report on drugs in horse racing on its Real Sports program. Trainer Steve Asmussen and his team have allegedly drugged and mistreated horses on his barn, and he’ll respond to the abuse accusations from PETA.

So racing has much larger issues than nasal strips. New York was the only racing jurisdiction that banned them: Blea claims they don’t enhance performance. “They open up the nasal passages and help the horses breathe, just like they do for NFL linebackers who wear them,” says Blea. “I’ve had horses run with them, and horses run without them. I haven’t seen enhancements. Optimization is the way to look at it. They optimize a horse’s breathing.” California Chrome, it’s important to note, isn’t just 6-0 while wearing the strips. He’s also 6-0 since Espinoza took over as the horse’s jockey.

Blea notes that unlike steroids, nasal strips don’t harm the horses, so they shouldn’t require any regulation. Wearing them isn’t cheating, when every other horse can do the same. When it comes to adhesives, the turf is level. “There’s nothing covert about them,” Blea says. “They’re visible on the horse and visible to the public.”

Over the past 36 years, a generation of sports fans who’ve never witnessed a Triple Crown winner have instead seen all kinds of Belmont heartbreak. Just look at the last decade alone. Birdstone caught Smarty Jones at the last second in 2004. Big Brown seemed like such a sure thing. He finished last in 2008. Two years ago, I’ll Have Another had everyone’s hopes up. Then, the day before the Belmont, he suffered a career-ending leg injury.

California Chrome seems so unflappable. They all do, after winning the Derby and Preakness. So much can happen between now and June 7. At least nasal-strip heartbreak is off the track. 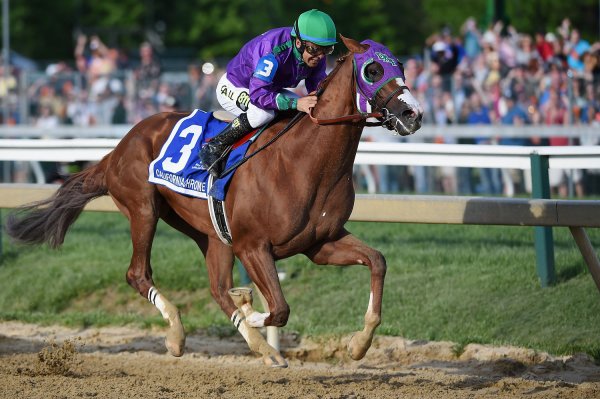 California Dreamin'
Next Up: Editor's Pick