PM-designate Narendra Modi addressing a rally in Vadodara, Gujarat, after the BJP won the Lok Sabha elections on Friday, May 16, 2014.
The India Today Group—India Today Group/Getty Images
By Shikha Dalmia

Narendra Modi won India’s national elections by a virtually unprecedented parliamentary supermajority, routing the ruling Congress Party. He pulled off this feat by overcoming his image as a militant Hindu nationalist and positioning himself as the Indian avatar of Ronald Reagan, promising to take India’s moribund economy to new heights with his formula of “maximum governance, minimum government.”

But he also made many unwise campaign promises that directly contradict his mantra. He’ll have to break at least five of them if he’s to have a prayer of delivering the growth he promised.

More than 20% of India’s economy consists of poorly run, federally owned companies. About one-third of them operate on a loss, and the rest return profits of less than 1% annually. Hence, a reformer who believes in “small government” must make aggressive privatization his top priority.

Instead, last month, Modi made the face-palm inducing statement that beating up on these companies has “done much damage” to them. He promised to fix, not sell, them by squeezing out – wait for this! — “administrative inefficiencies.” But central planners since Lenin have been trying to do just that without success.

So unless he knows something that they didn’t, he’d be doing the country a favor by putting them out of their misery.

There is no doubt that India needs to improve its infrastructure – pathetic even by developing countries’ standards – if it wants to boost productivity and growth. (Indians joke that while the British drive on the left of the road, Indians drive on what’s left of the road.) But India is a poor country with not a lot of spare change. So a believer in “good governance” would focus, laser-like, on core public goods like sewage, water, roads and electricity. Just upgrading these to minimum international standards, according to global consulting company McKinsey, will require an investment of $1.2 trillion over 20 years, about eight times more than currently proposed.

Instead, Modi has produced an infrastructure development plan as gaudy as Liberace’s Christmas tree, complete with “bullet trains in four directions.” The bullet train or high-speed rail concept was obviously calculated to pander to India’s chauvinistic desire to keep up with China. But these rails are white elephants on which China’s autocrats spend unsustainable amounts because they rarely pay for themselves, my Reason Foundation colleague Baruch Feigenbaum points out. So Modi would be better off abandoning them along with his other loopy plans for smart cities and elite universities.

He was totally on board with Congress’ scheme to guarantee 100 days of income to rural families without an employed male –- a massive disincentive to work. True, he did criticize the Food Security Act that handled means-tested food assistance. But why? Because it wasn’t generous enough. He has pledged to guarantee farmers 50% profits, something that even Congress couldn’t bring itself to do.

Worse, his party’s platform proposed to add the Right to Health to the long list of rights that the departing party has already put on the books.

If Modi really wants live up to his billing as a Reagan-like reformer rather than becoming the second coming of Jimmy Carter, he ought to get rid of these programs, replacing them with a scaled back direct cash-transfer scheme that hands poor people a lump sum to spend as they see fit. This will have a better shot of reaching the pockets of intended beneficiaries rather than corrupt bureaucrats.

One of the few politically difficult reforms that Congress enacted was allowing foreign supermarkets such as Walmart to own a majority stake in local retail stores. India’s $500 billion retail industry is among the most backward in the world and could badly use an infusion of capital and expertise to modernize itself.

However, Modi, this fearless reformer who prides himself on having attracted a record amount of foreign investment in Gujarat, agreed to scrap this law. Why? Because it threatened millions of small mom-and-pop storeowners, his party’s core base.

In the last few days, he’s started reversing course, telling storeowners to treat globalization as an opportunity, not a threat. That’s a tune he should keep humming.

After experiencing heady growth for about a decade, India has been in the grip of soul-sapping stagflation, with inflation outpacing GDP growth by a factor of two. Congress had wisely invited University of Chicago’s Raghuram Rajan to head the Reserve Bank, India’s equivalent of the Fed, to tackle inflation.

But Modi has been sending mixed signals about whether he’ll keep Rajan. That’s because Rajan might insist on an inflation-targeting regime. This will mean keeping interest rates high until inflation has been slashed from the current 9% to 4% or so.

However, this will make government borrowing to finance Modi’s gaudy infrastructure plans — as well as private borrowing for capital investments — much more difficult. The latter, sadly, is at an 11-year low, severely crimping jobs and growth.

Modi is admittedly between a rock and a hard place on this. But Reagan, his role model, allowed the central bank to first squeeze out inflation, and so should Modi.

He could raise funds for needed, not feel-good, infrastructure projects by eliminating wasteful subsidies, selling off inefficient public companies and inviting foreign investment, which is all the more reason to break the other four promises.

Shikha Dalmia is a senior policy analyst at Reason Foundation. The views expressed are solely her own. 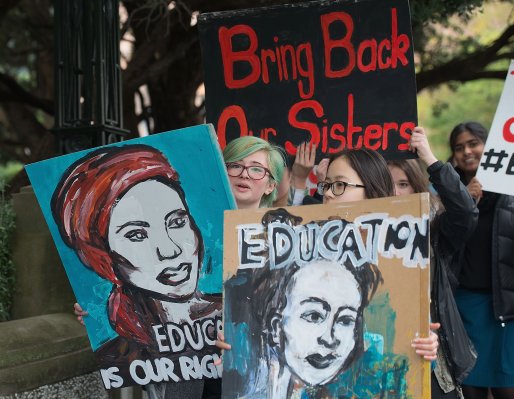 Too Many of Nigeria's Women Are Targets—Not Just the Kidnapped Girls
Next Up: Editor's Pick