Former New York Times editor Jill Abramson joked to graduating college students Monday that “I’m in exactly the same boat as many of you,” making her first public appearance at a North Carolina commencement since she was fired from the newspaper last week.

Abramson, the commencement speaker at Wake Forest University, acknowledged the “media circus” surrounding her speech, saying, “the only real news here today is your graduation from this great university.” Abramson said she was “impressed that your achievements have attracted so much media attention, as well they should.” She said the firing “hurt,” and spoke about the importance of resilience.

“Some of you, and now I’m talking to anyone who’s been dumped, not getting the job you really wanted, or gotten those rejection letters from grad schools, you know the sting of losing, or not getting something you really want,” she said. “When that happens, show what you are made of.”

She told the audience that her sister had called her the day after she was fired from the Times. “I know dad would be as proud of you today, as the day you became executive editor of the New York Times,” Abramson recalled her sister saying. Abramson joked that between getting hit by a truck seven years ago and her abrupt firing, she should be called “Calamity Jill.”

Abramson’s sudden ousting from the Times caught both the newsroom and the national media establishment by surprise, and has ignited controversy over what led to it. Some reports have indicated that Abramson was fired because she press executives about making less than her male predecessor, while other reports have said a management style that ruffled feathers was the cause. The Times has been adamant there was no pay disparity and that the issue played no role in the firing. Many women have pointed to complaints about her management style as amounting to a double-standard. Abramson, the newspaper’s first female executive editor, was replaced by Dean Baquet, the paper’s first African-American top editor.

“Fueling [outrage over her firing] have been persistent but incorrect reports that Jill’s compensation package was not comparable with her predecessor’s,” Times publisher Arthur Sulzberger Jr. said in a statement Saturday. “This is untrue. Jill’s pay package was comparable with Bill Keller’s; in fact, by her last full year as executive editor, it was more than 10% higher than his.

“Equality is at the core of our beliefs at The Times,” Sulzberger said. “It will always be.”

Abramson is famous for having the Times‘ T logo tattooed on her back, and she said during commencement address that some students asked her Sunday night if she would get it removed: “Not a chance.” 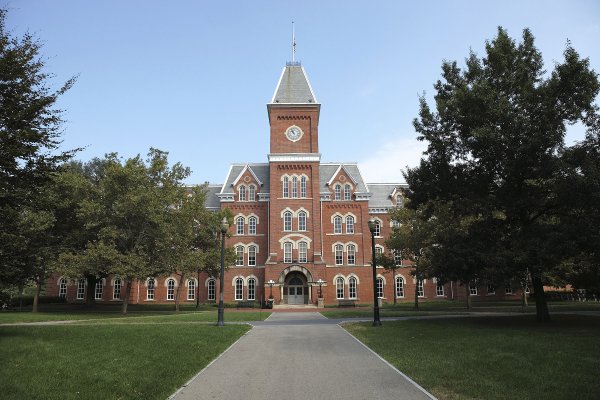 Salaries of College Execs Up as Student Debt Rises
Next Up: Editor's Pick