This season of Mad Men has inadvertently generated some great spin-off ideas — how did Dawn and Shirley’s interactions in the Valentine’s Day episode not spawn a drama about 1960s secretaries? Sunday’s episode, “The Strategy,” was no exception. The return of Trudy Campbell and that tracking shot of Megan and Bonnie flying back to California could have been a trailer for Real Housewives of Mad Men. Even more fun to imagine was Modern Family: 1969 — starring Joan and Bob Benson as unlikely co-parents — until that fantasy completely imploded, that is.

Bob returned to the SC&P offices from Detroit with GM exec Bill Hartley in tow. At first, Bob’s visit is all pancakes and ice cream cones as he spends quality time with Joan and her little boy, Kevin. (Still missing: Bob Benson’s shorts.) But Bob is summoned to jail in the middle of the night to bail out Bill, who tried to offer his, well, services to an undercover cop. Following some harassment from the on-duty officer, Bill hits Bob with surprising news: GM is taking its Chevy business elsewhere and dumping SC&P, but don’t worry, Bob has a cushy offer from Buick coming his way. Normally that’d be good news for someone as ambitious as Bob, but the whole evening triggers a personal crisis in Bob that finds him propositioning Joan with an unusual marriage arrangement: She gets a father figure for her son but keeps her independence; he becomes the “certain kind of executive” (hint: a straight one) his new job requires him to be. “I am offering you more than anyone else ever will,” he tells her, but that’s not enough for Joan, and it shouldn’t be. “I want love, and I’d rather die hoping that happens then make some arrangement,” she decides. In other words: not great, Bob. Not great at all.

What will become of Bob Benson? His fate seems uncertain now. The year is 1969, and Stonewall is on the horizon. Mad Men’s previous acknowledgment of social change and civil rights movements suggests the show will incorporate the riots into its plot, too, but at the same time, Bob’s desperate, tearful proposal felt like an ominous last resort. So much of this season has been a reminder that while the 1960s were a time of great change, that change didn’t always happen as fast as it should have; it would be a sobering message if Bob didn’t live to witness such a watershed moment in LGBT history. Then again, maybe Bob will just disappear without any explanation — the mystery surrounding the character has always been more fascinating than his truths, and not knowing his fate might actually be the most appropriate send-off.

The biggest surprise of Bob Benson’s return, however, was that he didn’t run into Pete, who was in town catching up on both Burger Chef and his estranged wife and daughter. Talk about change never happening as fast as it should — Pete has conned himself into thinking he’s on the right side of history while upholding an infuriating number of double standards. Sure, he can join the mile high club with his hot L.A. girlfriend, but God forbid Trudy leave the kid with the nanny for a night and have some fun. His infidelity broke their marriage, but she’s immoral; his own daughter hardly recognizes him, yet Trudy is guilty of neglect.

This week, Pete was full of reminders that the 1960s were really only fun if you were a straight white guy. After Peggy wows him with a Burger Chef presentation, he suggests the concept might land better if Don pitches it to the client instead. Pete claims the decision is totally up to her, but even after Peggy promises to “bring this one home” — way to lean in, Peggy, way to lean in! — he assigns Don the presentation anyway and throws her a backhanded compliment about being “as good as any woman in the business.”

But it’s ultimately Don, not Pete, who causes Peggy to lose her confidence. In Sunday’s episode, Don is given a number of opportunities to sabotage Peggy’s ideas and advance his own. He doesn’t take them, but he does suggest a new, last-minute concept for Burger Chef after her meeting with Pete. It rattles Peggy, probably because she admires Don way more than she does Pete, and so she stews about it all weekend in her Kermit-the-Frog power suit. She later calls Don to say his idea was a stinker, but even Peggy knows second-guessing herself has less to do with the quality of ideas and more to do with the nature of the job and the way workplace sexism has screwed up her instincts. Don’s idea, she tells him, is only “poison because you expressed yourself.”

Peggy certainly goes out of her way to be mean about it, but coming clean about her self-doubt only bring the two closer. The return of Bob Benson did elevate the episode’s writing, but it was the scenes between Peggy and Don that made this one such a stunner. There were so many standout moments — Peggy acknowledging her secret 30th birthday, Don worrying “that I never did anything and that I don’t have anyone” — but what makes Don so likable during these scenes is how he alternates between self-awareness and a complete lack thereof. When Peggy makes a snide comment about how Don always swoops in to save-the-day with a pitch-meeting epiphany, a puzzled Don asks, “Do I do that?” Later, when a frustrated Peggy asks him to explain his creative process, he admits, “First I abuse the people whose help I need, and then I take a nap.” Nothing could spoil these exchanges, not even the fact that Peggy’s subsequent Burger Chef breakthrough (“What if there was a place you could go where there was no TV, and you could break bread, and whoever you were sitting with was family?”) is basically an Olive Garden ad: When you’re here, you’re family!

A quick note on family: Matthew Weiner has said before that Megan Draper isn’t going to die, despite the character’s many connections to Sharon Tate, but this episode laid the groundwork for what could be an early farewell: Don and Megan have what looks like one last night of blissful lovemaking as she packs up her leftover possessions; the SC&P secretary who tells Megan she didn’t know Don was married becomes the latest character to basically say, “Oh, right, Megan — sorry, forgot you existed.”

Besides, the episode’s final shot emphasizes that the series’ most important family ties aren’t necessarily the ones bound by marriage licenses. Peggy and Don celebrate their new ad concept with a late-night Burger Chef run, where they’re joined by Pete. As Peggy tells him all about how Burger Chef is a place where every table is a family table, the camera zooms out to suggest that co-workers can be family, too.

It’s unclear who’s who in this “family.” Peggy and Don basically did a father-daughter dance at the end of their heart-to-heart, but if anyone’s the child in this group, it’s obviously the tantrum-throwing Pete Campbell. Peggy and Pete did have a secret baby together, however, so maybe that makes Don the wise old uncle instead?

It doesn’t really matter — the episode’s conclusion confirms what fans have known all along: Don and Peggy are still the heart of the show, but just as we’d rather not see Don return to his former glory with Peggy in his shadow, we don’t really want to see Peggy gloat and act superior, either. What may ultimately save Don and Peggy from their miserable fates, it turns out, is each other. 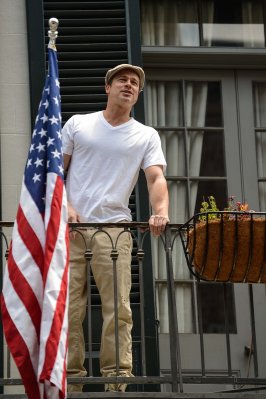 Watch Brad Pitt Toss Matthew McConaughey a Beer From Across the Street
Next Up: Editor's Pick