Sex and Death at Cannes

(READ: Richard Corliss’s review of Blue Is the Warmest Color)

This year’s slate features two studies of the uses and sad abuses of sexuality. One film, the French The Blue Room, which treats the consequences of an adulterous affair, is among the finest on view so far. The other, the Canadian The Captive, fails to grapple successfully with the sick side of sex: the criminal misuse of children.

THE BLUE ROOM. The Belgian novelist Georges Simenon had ample opportunity to consider the dramatic vectors of adulterous liaisons: according to his own confession or boast, he had sex with more than 10,000 women. As productive as he was profligate, with nearly 200 novels and as many short stories, Simenon often wrote of men and women drawn into affairs that end in pain or violence. Among his finest essays on the wages of sex is his 1964 novel The Blue Room, which director-star Mathieu Amalric has made into a film that is splendidly taut, forcefully understated and, at just 76 minutes, blessedly concise. It earns admiration both for the mood it creates and for the melodramatic excesses it avoids.

Julien Gahyde (Amalric), seemingly content in his marriage to Delphine (Léa Drucker), has for the past few months indulged in an affair with Esther Despierre (Stéphanie Cléau), the sultry wife of one of Julien’s old classmates. A tigress in bed, the passionate and possessive Esther sometimes bites Julien’s mouth, as if signaling to attentive eyes — Delphine’s, for example — that he belongs to her. If she were free, Esther asks him, would he leave Delphine? His answer is enigmatic.

Two sudden deaths later, Julien and Esther are arrested, though the prosecuting judge (Laurent Poitrenaux) shines the searchlight of his skepticism on the philandering husband. The “blue room” refers not only to the site of his illicit assignations but also to the color of the trial chamber at the end of the film. Both are places where sex leads to severe judgment.

(READ: Mathieu Amalric as a Bond villain in Quantum of Solace)

Shooting in the old “Academy ratio” (before wide screen) and making exemplary use of composer Grégoire Hetzel’s similarly classic score, Amalric expertly draws the noose of circumstance around Julien. He creates recurring visual motifs, like the housefly that indicates the first sign of trouble; the fly shape also appears as a drop of blood, from Esther’s love bite, on Julien’s white shirt.

Amalric plays the hapless adulterer as someone condemned for the merest infraction; in France, a husband’s sexual transgression is often considered no more serious than a parking ticket. The revelation is Cléau in her first major film role. (She also cowrote the script with Amalric.) Her unconventional beauty can express the allure of a dream lover or the quiet scheming of a demon. In a performance that disdains operatic excess, Cléau never raises her voice. She can seduce or threaten with the merest smile. Like this excellent little film, she achieves maximum impact with minimal means.

THE CAPTIVE. When did Atom Egoyan last make a good movie? Born in Cairo to Armenian parents and raised in Canada, Egoyan made some impressive early films, The Adjuster and Exotica, and won Cannes’ Grand Jury Prize (second place) for his Russell Banks adaptation The Sweet Hereafter. That was 17 years ago, and it’s been downhill ever since; he never validated his early promise as the chronicler of ordinary folks with secret sins and kinks. Yet the Festival keeps inviting him back, perhaps because he keeps casting red-carpet-worthy actors in his projects: Colin Firth and Kevin Bacon for Where the Truth Lies, and Ryan Reynolds, Rosario Dawson and Mireille Enos for his latest disappointment.

The Captive recapitulates the arc of Egoyan’s career: early promise, followed by arrant misfires. Cass (Peyton Kennedy), the nine-year-old daughter of a loving couple (Reynolds and Enos), is kidnapped by a child-sex ring. Nine years later, Cass (now played by Alexia Fast) has been compelled to originate Skype chats with young girls whom her captors will abduct and exploit. A psychological study of a young woman brainwashed from victim into predator could be fascinating, if only Egoyan — or another, stronger director — had pursued it.

Instead, he tries to build tension with the skeptical or hostile interrogation of the parents by two cops: Dawson and the egregiously overacting Scott Speedman. (Egoyan should look at The Blue Room to see how an official interrogation should be filmed.) Virtually very scene plays as too flat or monstrously jagged. As Cass’s captor, Kevin Durand serves up a cacophony of twitches and sick grins that the cops somehow don’t notice.

Winter in the southern Ontario locations allows for many chilly vistas, but only reminds viewers of the emotive power the director drew out of snowscapes in The Sweet Hereafter, back when an Atom Egoyan movie was a promise of dour pleasures and not of another missed opportunity. 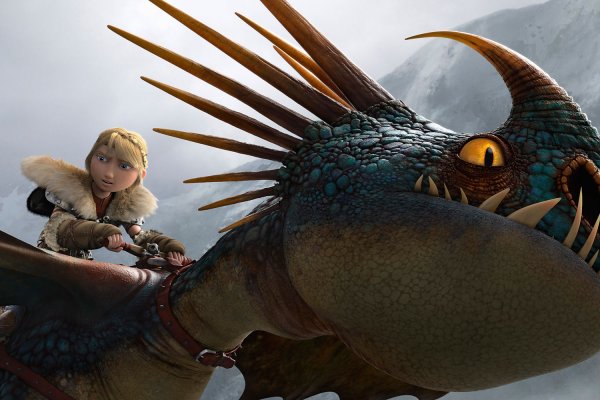 How to Train Your Dragon 2 at Cannes: Beasts of the Viking Wild
Next Up: Editor's Pick