San Diego residents began returning home Saturday even as some of the worst early-season wildfires in California’s history continued to carve a swathe of destruction along the city’s drought-wasted outskirts, threatening to engulf up to 30,000 acres of land.

The dozen or so fires that raged in the less populated areas around California’s second-largest city had desolated more than 26,000 total acres of land, or 40 square miles by early Saturday, Cal Fire Capt. Richard Cordova told TIME. Only one of the seven major blazes had been fully contained, and the rest are expected to spread further.

A fire that began on Naval Weapons Station Fallbrook on Wednesday had affected over 6,500 acres and a separate fire first reported Thursday—the “Las Pulgas” fire—engulfed 15,000 acres.

A total of 11 single-family homes in San Diego county and 25 structures of the Harmony Grove Spiritualist Association have been destroyed so far in the 2,520-acre Cocos fire, based on a damage assessment late Friday by local authorities. Dozens of home have been swallowed up over the course of the week.

An unusually harsh drought this season, along with hot, arid winds from the east have made the region particularly susceptible to fire, said Cordova, exacerbating the risk of the region’s 10-year fire cycle, which lands this year.

“We get extreme fire behavior every 10 years and the drought doesn’t help. This is very odd for the month of May to have these types of fires,” Cordova said.

Parts of the county were reopened for residents after some of the worst fires were quelled, with sections of San Marcos and the Del Dios corridor around Lake Hodges, but much of the area remained closed as the fire continued to burn actively with strong winds.

Up to 125,000 people have been forced to leave their homes, Reuters reports.

Authorities were investigating how so many fires started at the same time and whether they were intentionally set. Two teenagers were arrested on Thursday on suspicion of setting two small fires that bystanders quickly extinguished. A 57-year-old man was also charged with arson Friday in connection with a fire near the suburban area of Oceanside.

The fire erupted Wednesday near the town of San Marcos after the worst drought season since the federal government began monitoring levels in 2000.

Local firefighters are working closely with the U.S. military and national guard this year, who will deploy aid within 24 hours, faster than the four to five days of previous years, the Cordova said.

The fire could burn as much as 30,000 acres but cooler, more humid weather over the next few days will help firefighting efforts. 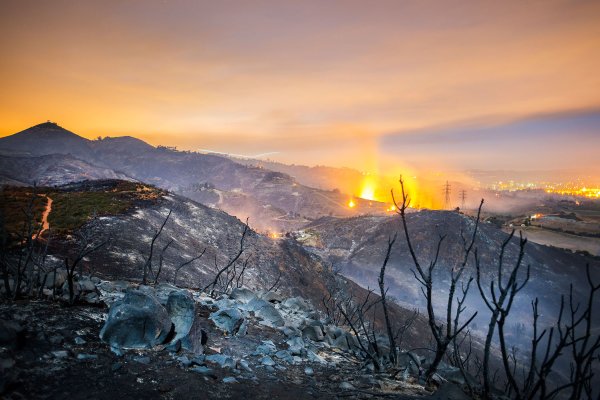