These Are The 69 Words GM Employees Were Forbidden from Using

Documents released by the National Highway Traffic Safety Administration on Friday show that there are some things you can say if you’re an employee at the kingpin automaker… and there are other things you just can’t.

Released as part of General Motors’ $35 million settlement with the U.S. government over its faulty ignition switch scandal, the slides from a company presentation in 2008 told employees to choose their words carefully, because anything said could end up publicized.

Basically, the presentation is a 101 in how to avoid a PR disaster. It’s not hard to imagine how the meeting unfolded.

GM management appears to have asked employees not to liken vehicles to “rolling sarcophagi,” and not to compare an automobile to the “Titanic” or the “Hindenburg.” And it could have really unnerved drivers if they heard that GM engineers had called their Chevrolet Malibus “gruesome” “deathtraps.” Staying away from the whole death thing was apparently highly recommended.

Employees were asked to avoid the use of the word “inferno” (unless, perhaps they were referring to the epic poem by Dante Alighieri, or the equally classic Dan Brown tale), and they were asked to avoid language that might evoke “explosions” or “powder kegs.” Cutting imagery such as “mutilating,” “lacerating” and even the more equivocal “potentially-disfiguring” was also to be eschewed.

Apocalyptic language, particularly in reference to their vehicles, was not condoned. And no, “Kevorkianesque” was not acceptable language, unless perhaps employees were rationally discussing the merits of euthanasia.

Here’s a full list of example words employees were asked to avoid:

A spokesman for GM, Greg Martin, said the company’s culture has changed since the 2008 training session in which the PowerPoint presentation was shown. “Today’s GM encourages employees to discuss safety issues, which is reinforced through GM’s recently announced Speak Up for Safety Program,” Martin said in a statement to Reuters.

GM has promised to improve employee training regarding documentation practices and discussion of safety issues, as part of the government settlement. But don’t expect the automaker to name its next SUV model “Challenger” any time soon.

Here’s the list as seen on the original document: 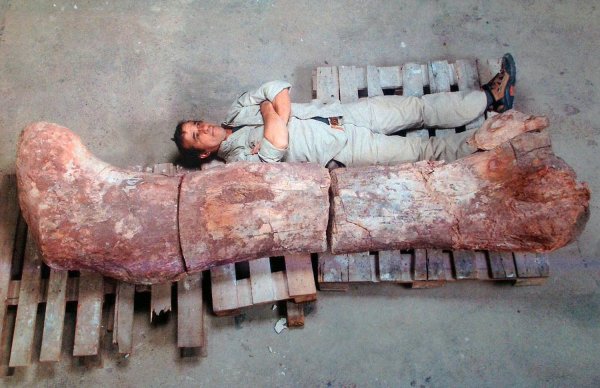 'Biggest Dinosaur Ever' Unearthed in Argentina
Next Up: Editor's Pick