Federal authorities are reviewing what may have been a near miss between two passenger planes flying to and from Hawaii last month.

The National Transportation Safety Board (NTSB) and the Federal Aviation Administration’s (FAA) Pacific Division are both probing the April 25 incident, ABC News reports. The FAA said a United Airlines Boeing 757 took evasive action to avoid a U.S. Airways Boeing 757 about 200 miles northeast of Kona. A team of investigators arrived in Honolulu on Thursday to piece together what happened.

Kevin Townsend, a passenger on the United flight, said the aircraft dived hundreds of feet without warning. “It was like being on an elevator dropping really quickly. You start to fall with gravity, not like in a fighter jet pressed up against your seat. It was like being in freefall,” he told ABC News.

He said that passengers were told by a flight attendant that the pilot had maneuvered to avoid an approaching aircraft in the same flight path.

United is looking into the incident with the NTSB. American Airlines, which owns U.S. Airways, said it is also working with authorities to try and establish what happened. 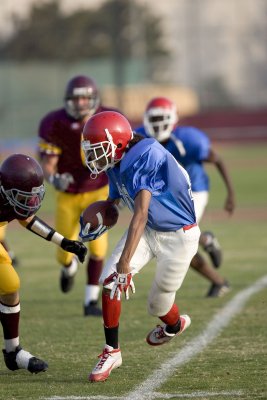 Calif. May Limit Some High School Football Drills
Next Up: Editor's Pick