Vietnamese PM: Fight On for the Fatherland, Just Do It Legally

Prime Minister Nguyen Tan Dung encouraged his fellow Vietnamese on Thursday to defend the country’s territorial integrity but with the appropriate behavior, after unchecked nationalist rage escalated into horrific riots.

In an unusual move, the Premier reached out via text message to almost the entire nation, urging citizens to continue protecting the “fatherland,” albeit in more a lawful manner.

“The Prime Minister requests and calls on every Vietnamese to boost their patriotism to defend the fatherland’s sacred sovereignty with actions in line with the law,” read the message, according to the Associated Press.

“Bad elements should not be allowed to instigate extremist actions that harm the interests and image of the country.”

The nationwide appeal comes after a spate of anti-Chinese riots exploded across Vietnam this week in response to Beijing’s placement of a state-owned oil rig in highly contested waters off the country’s coast.

Hundreds of factories were reportedly razed in the suburbs of Ho Chi Minh City, while a steel project in central Ha Tinh province was rocked by mob violence targeting Chinese laborers. Varying reports surfaced Thursday that Chinese nationals may have been killed during the upheaval.

“If [the Vietnamese leadership] has any chance of gaining the international support it needs to resolve this dispute, it absolutely must do a better job of communicating to its own people and to the world what exactly is going on,” Jonathan D. London, a professor and Vietnamese scholar at Hong Kong’s City University, tells TIME.

On Friday, officials claimed to have arrested more than 600 people in and around Ho Chi Minh City and another 78 in Ha Tinh province in response to the rioting.

During a press conference in Beijing on Thursday, Chinese officials appeared unconvinced by the official response and pinned blame for the carnage firmly on the Vietnamese authorities.

“It is worth pointing out that the Vietnamese side has an inescapable responsibility for the beating, smashing, looting and burning targeted at China and other countries,” said Foreign Ministry spokesperson Hua Chunying.

On Friday, Vietnamese state media attempted to return the spotlight to the unresolved crisis festering in the South China Sea.

Vietnam’s Minister of Foreign Affairs Pham Binh Minh told his Chinese counterpart during a phone call that Beijing must recall the drilling platform and the 100 vessels escorting it from “Vietnamese seas.”

“He stressed that China’s act seriously damaged the mutual trust between the two countries as well as Vietnamese people’s sentiment [and] runs counter to the agreements reached by their high-ranking leaders,” read a statement by Vietnam’s Ministry of Foreign Affairs.

But despite this verbal sparring, the two countries appear to have made nascent moves toward behind-the-scenes reconciliation. China vowed Thursday to deploy a diplomatic envoy to Vietnam, while Hanoi reportedly sent Deputy Foreign Minister Ho Xuan Son to China for a three-day visit earlier this week.

Chinese state media remain as bellicose as ever, though. Communist Party mouthpiece the Global Times dismissed Vietnam’s continued calls to remove the platform in its latest vitriolic article about the crisis.

“China will never give in to her [Vietnam], and she doesn’t have the strength to force China to back off,” read an editorial on Thursday. 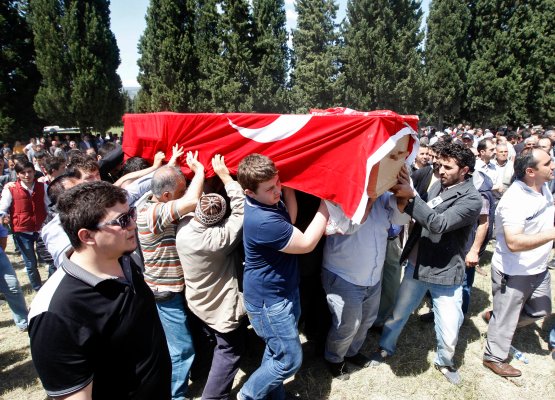 Anger Builds as Victims of Turkey’s Worst Mining Disaster Are Buried
Next Up: Editor's Pick