The Bharatiya Janata Party (BJP) has scored a major victory in India’s national elections and appears on track to have won a majority of seats in India’s lower house of Parliament, paving the way for Narendra Modi to become the nation’s next Prime Minister.

Partial counting indicates that the Hindu-nationalist party has pulled off the best performance by a single party in decades, buoyed both by Modi’s well-received campaign and a profound anti-incumbency sentiment felt across the nation after 10 years of government under the outgoing Congress Party. According to partial results at 9:30 E.T., the BJP was leading with 283 out of 543 seats in India’s lower house of parliament, according to India’s Press Information Bureau, a number that would give the party an absolute majority and clear mandate in the next government.

Though final results have yet to be announced, many foreign heads of state are reportedly already scrambling to congratulate Modi. “Good days are coming,” Modi said in a speech before supporters in Gujarat on Friday evening. “From today for next five years, the journey has started.”

A record number of voters participated in world’s largest election, a mammoth five-week process that ended on May 12. Over 66% of eligible voters cast their ballots, compared with 58% in the last vote in 2009.

The results so far are a massive blow to Congress, very likely facing its worst showing ever with only 45 seats, according to partial results. The party has already conceded defeat, with analysts blaming it on the poor performance of Congress vice president Rahul Gandhi in leading the party’s campaign and, more broadly, an overall crisis in party leadership.

“We have to introspect,” Kapil Sibal, a Congress minister who appeared set to lose his New Delhi parliamentary seat to a BJP candidate, told NDTV. “We have to [make] corrections and look at it positively.”

In its first national contest, the Aam Aadmi Party, led by former bureaucrat Arvind Kejriwal, is on track for a relatively muted showing — leading in just four seats at 9:30 E.T. — compared with its successful first state elections in New Delhi in December. After taking control of the New Delhi government, Kejriwal stepped down from the chief minister’s post after less than two months in office, a move widely seen as damaging to the fledgling party in its national debut.

Markets, meanwhile, surged on the strong BJP indicators, with the Sensex reaching an all-time high and the rupee gaining strength. Indian industrialists have long been clambering for more pro-business policies from Congress and its allies, and have said Modi’s decisive leadership style will help get the economy back on the high-growth path.

Modi’s fast climb in national politics has taken many in India by surprise since his appointment as the BJP’s prime-ministerial candidate in September. Having famously sold tea as a boy on the train platforms of his hometown in the western state of Gujarat, Modi rose through the state’s political machine to become its powerful chief minister in 2001. It’s a narrative that resonates with many Indian voters, but he has also been a divisive figure since a wave of bloody religious riots took place on his watch in Gujarat in 2002, in which over 1,000 Muslims were killed. Though Modi has been cleared of any wrongdoing by the courts, many, particularly within India’s large Muslim community, remain apprehensive about the prospect of a Modi-led government.

Aware of these sensitivities, the BJP was careful to downplay its Hindu roots throughout its campaign, focusing instead on issues of stable governance, development and job creation as Modi set out to reinvent himself as a national leader. His team ran a tireless and well-organized campaign, holding hundreds of rallies around the nation and making astute use of social media and carefully targeted advertising.

The party’s resounding win reflects the more conservative mind-set of provincial as opposed to metropolitan India. “It’s the first time you have a regional leader come to power in the center on his own gumption,” says Pradeep Chhibber, a political scientist at University of California, Berkeley. “This is a victory for small-town conservative India.” 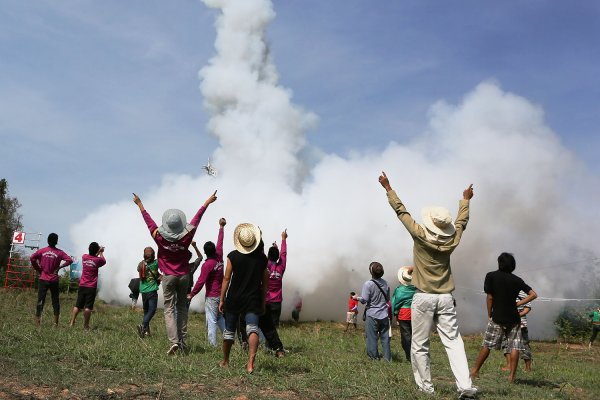 Feel Good Friday: 21 Fun Photos to Start Your Weekend
Next Up: Editor's Pick