Mr. Turner at Cannes: Portrait of the Artist as a Boar

His father was a barber; his mother came from a family of butchers. J.M.W. Turner wielded a softer scalpel: a brush, in the Sunday-painter medium of watercolors. Yet he shared his forebears’ talent for shearing. From his landscapes he pared the fat to find the meat, and located, in his evocations of angry sunsets and violent storms, the essence of visual art: light. TIME’s Robert Hughes proclaimed Turner (1775-1851) “the most profound romantic artist in 19th century Europe.” In “the Beethoven-like grandeur of the last landscapes,” Hughes wrote in 1974, “the world of detail and substance has been fully absorbed into the vibration of light, pure self-delighting energy manifesting itself.”

(MORE: Robert Hughes on J.M.W. Turner by subscribing to TIME)

Who put this elemental fury and rapture on canvas? Who was this pathfinder of the sea and sky — “a far more ‘modern’ artist,” Hughes insisted, “than any of the French Impressionists” a half-century later? He was neither starving artist nor slumming aristocrat. A poor boy, self-educated, Turner sold paintings from his early teens; he received the esteem of most critics, the Royal Academy and lordly patrons until his death at 76.

Nor was he the most sensitive of souls, to judge from his biographers and now from Mike Leigh’s Mr. Turner. Many reviewers at Cannes have cheered the movie as the festival’s first highlight and a worthy contender for the top-prize Palme d’Or. We’re not quite there. We revere Turner more than Mr. Turner — a stark film, gorgeously photographed (digitally) by Bill Pope, but cold and hard on the surface and in what we detect is its heart.

In Timothy Spall’s remorseless impersonation, Joseph Mallord William Turner is a bit of a beast. Glum, gruff, with irregular teeth, he can erupt into snorts and whinnies — by any definition, a boar. When the mood suits him he takes abrupt sexual advantage of his dim, devoted housekeeper Hannah (Dorothy Atkinson). In scenes that play like drawing-room comedy with a poisonous edge, he curtly dismisses his mistress (Ruth Sheen) and their two daughters. He duns an impecunious painter, Benjamin Haydon (Martin Savage), for return on a 50-pound loan, though Haydon had lost five of his children to early death. (He spent time in debtor’s prison and killed himself at 60.) On and on, Leigh slams his message home: Artists don’t have to be nice people.

The director is best known for the acerbic dramas — Naked, Secrets & Lies, Vera Drake — that he prepares in months-long workshops with his cast. Leigh also served up the delightful Topsy-Turvy (1999), which detailed the creation of Gilbert and Sullivan’s The Mikado. His new film spans the last 25 years of Turner’s life, depicting some of his travels in search of inspiration for his paintings. On a ship in the North Sea, as a dreadful storm brews… but let’s hear the artists’s own words: “I got the sailors to lash me to the mast to observe it. I was lashed for four hours, and I did not expect to escape; but I felt bound to record it if I did.” Hughes calls that painting, Snowstorm—Steamboat off a Harbor’s Mouth, a “devouring vortex of exquisitely modulated energy.”

Along the way, many 19th-century estimables drop by. Oh, look, there’s John Constable (James Fleet), Turner’s rival in landscapes. Here comes the scientist Mary Somerville (Lesley Manville), one of the first women elected to the Royal Academy of Astronomy. We attend a salon session with John Ruskin (Joshua McGuire), the young critic whose book Modern Painters praised Turner and argued that the artist’s creed should be “truth to nature.” We even get a brief audience with Queen Victoria (Sinead Matthews) and Prince Albert (Tom Wlaschiha). Except for Charles Dickens — who took time from writing novels to say of Haydon that “he most unquestionably was a very bad painter” — the gang’s all here.

Epic in breadth and length (two hours, 29 minutes), Mr. Turner is intimate in incident. Except for the Snowstorm ordeal, it lavishes little attention on scenes of the suffering artist — though Turner occasionally must suffer fools, among his critics and other painters. Leigh is more interested in Turner’s relationship with his father William (Paul Jesson), who once sold the boy’s paintings in his barbershop and later serves, doggedly and without complaint, as his son’s assistant. William’s death is one blow that penetrates the artist’s tough hide.

Having spent early years in the seaside town of Margate, Turner returns in his 50s and, using his middle name Mallord, takes up residence in a home owned by the seaman Booth (Karl Johnson) and his cheerful wife Sophia (Marion Bailey). After Booth’s death, the working-class widow becomes Turner’s longtime mistress, in one of the film’s few acknowledgments of human tenderness.

Another dour Englishman, Thomas Hobbes, proclaimed life outside society as “solitary, poor, nasty, brutish and short.” This long movie portrays Turner as nasty and brutish, an unpleasant man with the freakish gift of painterly genius. On his deathbed, he summoned eloquence to match his artistry. His final words: “The sun is God.” That’s an oddly uplifting conclusion to a film that shows so many storms of temperament from a man with a foul-weather mood. 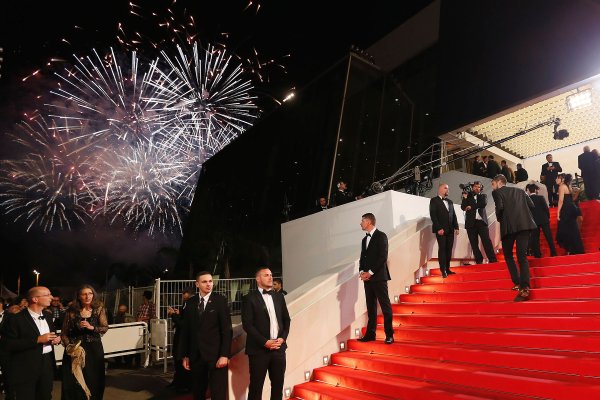 What Cannes Needs: More Fireworks!
Next Up: Editor's Pick