How did you go from making reality TV like Survivor and The Voice to taking on the Bible three times–with last year’s miniseries, the Son of God movie and the upcoming A.D.?

I don’t even know what “reality TV” means, but unscripted dramas are made on a pretty large scale, with multiple helicopters and a crew of about 400. And most of my things are extremely family friendly or even morality plays. For instance, in Survivor, the person who gets a million dollars is asking the people they eliminated to give them a million dollars. So the worse you treat others, the less likely you are to get the million.

In 2004 you said you didn’t believe in any religion. Did you have a change of heart?

What I always thought growing up, which I think a lot of people feel, was that the Bible was like a rule book and if I stepped left or right, a lightning bolt might hit me. But actually it’s a love story. I’m hoping that, while Son of God is an epic movie and a political thriller, it’s still got this intimate, personal love story.

Did you ever consider going with a nonhandsome Jesus?

When Diogo Morgado walked up our garden path, Roma [Downey, Burnett’s wife] looked out the window and said, “That’s him.” I said, “Roma, we haven’t even met him.” She said, “I prayed to God to let me know him when I see him.” And look at the choice the Holy Spirit made.

A model and Portuguese telenovela star?

What does that matter? That’s like saying someone was a milkman, got called up to go fight in the war and got the Medal of Honor. What does it matter what he was?

Son of God is partly created from scenes originally shot for The Bible series on the History Channel. Did you anticipate that being so big?

No. It got 13 million on that first Sunday. And then suddenly everyone’s talking about it being the No. 1 show. It beat Game of Thrones. It beat Walking Dead. I remember that CNN headline–God beats zombies!

Cee Lo Green, who sings the closing gospel number, is most famous for his song “F-ck You.” Why did you ask him?

His voice. It’s beautiful. Cee- Lo grew up in the church. I’m not to judge anybody, so I’ve never asked him what … I’m not his parent.

Are you kind of an evangelist now?

Not “kind of.” Look, how many people have we reached in the last 12 months with this message? Hundreds and hundreds of millions. Do you remember what it was that launched Billy Graham? It was William Randolph Hearst. And Hearst Corporation put the first initial money into The Bible series and Son of God. Same corporation in the same lifetime.

Do you think your service as a paratrooper in the British army gave you a tolerance for more risky projects?

No. You are either driven by running away from fear or running to pleasure. I tend to run away from fear. But my fear is of looking back having not tried.

As more or less the creator of unscripted TV, do you feel at all responsible for the rise of the Kardashians and Snookis of the world?

Nothing to do with me. I think the reason I have all these TV shows–and last year I had seven–is because they’re all family friendly. I do know the Kardashians are Christians. They’re friends of ours.

Which of your shows would you have liked to be bigger?

Eco-Challenge. It ran for nine years, so I can’t complain. But I tried to launch a travel company around it. I didn’t realize that it was so tough on TV, people couldn’t imagine making a holiday out of it.

Come and have a terrible time!

I do love the wilderness. I feel that really fits in, biblically. 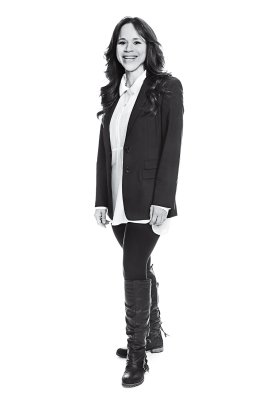 10 Questions with Rosie Perez
Next Up: Editor's Pick