A Pro-Russian demonstrator waves Russian and Crimea flags atop an old Soviet Army tank during a protest in front of a local government building in Simferopol, Crimea, Ukraine, Feb. 27, 2014.
Darko Vojinovic—AP
By Simon Shuster

The residents of Crimea, a region of southern Ukraine, woke up on Thursday to find their country’s flag over the regional parliament replaced with the Russian tricolor. Overnight, dozens of gunmen had seized the building, taking advantage of the power vacuum that has emerged in Ukraine since last week’s revolution ousted the ruling government. Though the gunmen did not immediately state their demands, local officials said they were from the pro-Russian majority on the Crimean peninsula, which has been up in arms against the nationalist, anti-Russian elements of the uprising that overthrew President Viktor Yanukovych.

Eyewitnesses and local officials said more than 100 armed men had carried bags of assault rifles, grenade launchers and other weapons into the parliament building before sealing themselves inside early Thursday morning. The gunmen told security guards to leave the building, and they have not taken any hostages. “The men who have taken the building are not showing any signs of aggression,” Crimean Prime Minister Anatoly Mogilev said in televised remarks on Thursday morning. “The situation is under control. The negotiations are underway.” The vice premier of the Crimea, Rustam Temirgaliev, said that the gunmen were “self-defense forces of the Russian-speaking citizens of Crimea.”

Since revolutionaries took over Ukraine’s capital a week ago, the ethnic Russian majority in the Crimea has largely refused to recognize the new government. In some Crimean cities, citizens have begun forming pro-Russian militias to resist the new authorities. “There’s not a chance in hell we’re going to accept the rule of that fascist scum,” Sergei Bochenko, the commander of a local militia group in the Crimea, told TIME last week in the city of Sevastopol. He said his battalion was armed with assault rifles and had begun training to “defend our land.”

Resting on the southern tip of the Crimean peninsula, Sevastopol is home to a major Russian military base. Some of its ethnic Russian citizens have appealed for Moscow’s help to protect them from the new government, which they widely believe to be a fascist force backed by the United States and European Union.

On Thursday, as the siege unfolded in the Crimean capital, Russia received a similar appeal from Yanukovych, Ukraine’s ousted president, who is wanted in his homeland on charges of mass murder after police under his command slaughtered dozens of protesters last week. “As before, I consider myself the rightful head of the Ukrainian state,” he wrote in an appeal distributed to the press. “My allies and I have received threats of revenge, urging me to ask the authorities of the Russian Federation to ensure my personal safety from the actions of extremists,” he added, referring to the revolutionaries.

So far, Russia has refused all appeals to interfere in Ukraine. On Tuesday, Foreign Minister Sergei Lavrov said during a trip to the E.U. that Russia had “confirmed our principled position of nonintervention in Ukraine’s internal affairs.” But a few days earlier, on Feb. 22, a senior delegation of Russian officials attended a summit of officials from the fallen regime and, in a resolution passed at the summit, called on Ukrainians to form militias to resist the revolutionary government.

“The provocateurs are on the march,” Ukraine’s acting Interior Minister, Arsen Avakov, said in reaction to the seizure of the Crimean parliament. He said that police forces had been dispatched to the area to “prevent bloodshed among the civilian population.” But Ukraine’s police force is now in a state of upheaval. On Wednesday, Avakov disbanded country’s elite anti-riot troops, the force known as the Berkut, whose men gunned down dozens of protesters a week ago during the regime’s last stand against the revolution. The following day, the uprising forced the President and all of his police forces to flee.

As the revolutionaries took power, their so-called “self-defense forces” took over many functions of the police, while the forces of the old regime were sent back to their hometowns, jobless and afraid of retribution from the revolutionary government. Some of them have pledged to join militia groups and continue their fight against the revolutionaries. “Now this is a civil war,” said Vlad Roditelev, a 21-year-old policeman returning home to the Crimea on Saturday after his battalion was ordered to flee the capital. “We just have to defend our own city now,” he told TIME that day in his hometown of Sevastopol. “The country is lost.” 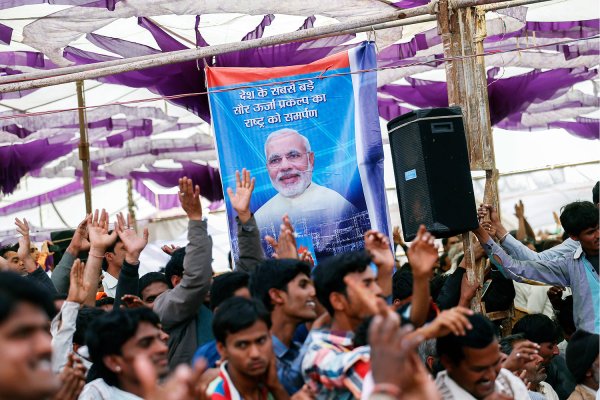 India’s Opposition BJP Will Storm the Next Election, a New Poll Finds
Next Up: Editor's Pick