And the Most Expensive City in America to Hire a Babysitter Is...

In 2012, the Guinness Book of World Records named New York City the home of the most expensive burger. (That would be “Le Burger Extravagant” for $295 at swanky Upper East Side establishment Serendipity 3.) And now it’s officially the most expensive city for parents to hire a babysitter.

So basically, New York City is really just the most expensive city in the United States for parents who want to leave their kids at home and go out to eat luxury burgers.

The average hourly babysitting rate for one child in New York is $15.34, based on a survey by UrbanSitter, which compiled data from nearly 7,500 families. That’s about $4.50 per hour more expensive than the cheapest big American city, Denver, whose babysitters charge parents an average of $10.84 per hour.

UrbanSitter also found that parents go through babysitters pretty quickly, with only 6 percent saying they’ve had the same one for over 5 years. Parents also like to go out a lot: more than a fourth of parents say they hire a babysitter once a week or more. And 30 percent of parents say they would not hire a “manny”—a male babysitter.

And there’s another reason it makes sense that New York would top the list: it’s the city with the highest cost of living in the United States. 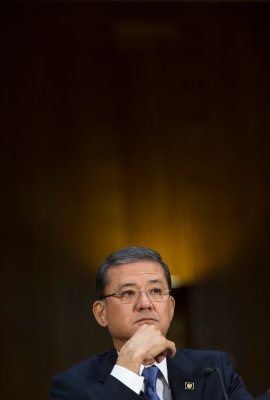 Shinseki 'Mad As Hell' About V.A. Allegations
Next Up: Editor's Pick