China's Hard Landing Is Coming, But It's Not The One You Expect

For years, people have worried whether China is headed for a hard landing. Those concerns are overstated—just like fears that the U.S. was going to default, or that the Eurozone was going to fall apart. But there is trouble coming in the long term: either many leaders and elites will have a hard landing, or far more troublingly, the country itself will.

Here’s why there is good reason to be confident that China will do well over the next year or so: The leadership under Xi Jinping has actually engaged in transformational economic reform without the specter of urgent crisis. Leaders rarely undertake difficult projects when circumstances don’t absolutely force their hand (and even then, those responses begin to recede along with the threat itself). That’s what we saw with the Eurozone sovereign debt crisis, and with financial reform in the U.S.

By contrast, even in the absence of crisis, China’s leadership has been able to make methodical, significant change, dictating their own pace and priorities for economic reform. The most significant reforms have been around the environment, particularly air quality; Xi Jinping understands that these issues will take a long time to fix. There has been financial reform as well, which struck him as urgent because many of the leaders most committed to it will retire by 2018. And Xi is reforming state-owned enterprises, while loosening the rules for foreign direct investment.

Even as Xi slowly opens up the economy, he is clamping down politically to mitigate risk. Xi is surrounding himself with strong leaders, consolidating support at the top echelons of government. He’s taking firm control of the military, something he worked out with the former president and which typically takes longer to happen. He has managed to build institutions within the party that are focused on internal control, such as a national security council that focuses resources on internal stability. He has also waged a strong anti-corruption campaign to keep political leaders in lockstep with his economic reforms.

And it has all gone pretty smoothly thus far. China’s growth has actually remained quite strong; it’s tapered off slowly in recent years, but that’s part of the process of building a more sustainable economic model. And there has been very little political backlash. (The only example has been former President Jiang Zemin’s warning that “the footprint of this anti-corruption campaign cannot get too big”). When it comes to popular dissent, it hasn’t materialized in any acute way. (Yes, there are demonstrations in the country, but we’ve been reading Tom Friedman columns for decades claiming China is going to implode. He hasn’t written any of those lately.) In short, Xi has a well-considered plan, and he has sufficient internal support to pull it off. It’s hard to imagine a scenario where this falls of the rails in the near future.

But there is a hard landing coming down the road. And it’s not economic, it’s political.

Xi’s reforms are not just cosmetic. Real changes to the economy will threaten the vested interests of all the Chinese leaders who have been making significant money for themselves and their allies through inefficient investment of state capital, protection for their preferred companies, and inappropriate promotion of growth over sustainability. If the reforms are going to work, then an entire class of Chinese leaders, who have enriched themselves for over 30 years, will suddenly be on the losing end. And that’s a problem.

The fact that Xi has gone as far as he has with no pushback—no civil disobedience, no willful obstruction by leaders—is extraordinary, but we can guarantee it won’t continue forever. When pushback comes, it’s going to be as strong as the powerful people that his reforms threaten. And that will be the moment of truth for China. When that moment comes, one of two things could happen. An entire cadre of Chinese leaders suffers a hard landing; this would be for the greater good of China, as Xi’s economic fixes continue and things improve. Or these powerful elites win, and Xi’s reform process stalls out. At that point, the country could experience a much more devastating hard landing, because the legitimacy that Xi has built up will collapse, and critical environmental and economic problems in China will go unfixed. That will all lead to public disenchantment. That’s when you’ll see the real instability on the streets.

Reforms are a tremendous undertaking and a great opportunity for China; Xi has performed as well as anyone could have hoped for thus far. If he can push on with reforms despite the political pushback, we could see a much more vibrant Chinese economy. But if powerful Chinese leaders can avoid a hard landing, it will come at the expense of China itself.

Ian Bremmer is president of Eurasia Group and author of “Every Nation for Itself: Winners and Losers in a G-Zero World.” You can follow him on Twitter @ianbremmer. 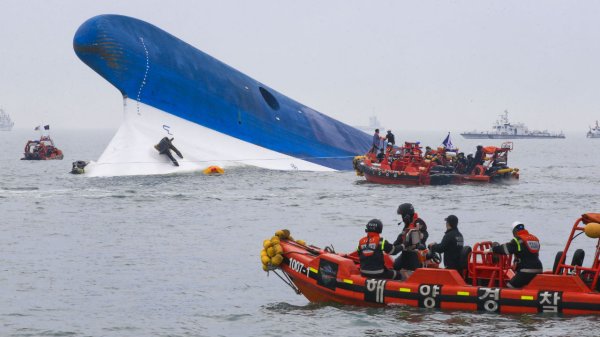 Ferry Captain Charged With Homicide
Next Up: Editor's Pick