Midway through the year, how is America’s economic recovery really doing? It’s complicated.

We’ve just gotten what in many ways appears to be a stellar jobs report. The U.S. economy created a whopping 288,000 jobs in April, and the unemployment rate fell to 6.3%, its lowest level since 2008. Unfortunately, it didn’t fall just because tens of thousands of new jobs were created in construction and retail, for example. A bigger reason it fell is that fewer people are looking for work. In fact, the workforce-participation rate–the percentage of people who are actually in the labor market–dropped to its lowest level since 1978.

The question now is whether or not people who are shut out of the labor market for various reasons will be able to return to work as the recovery strengthens. Ultimately, the answer will determine how most Americans experience the next few years–how much it will cost you to buy a new car or home or what you will pay in student loans.

It’s not hard to see why workforce participation is such a hot topic. Over the past five years, the percentage of the population working in America has dropped to the levels of Europe as a whole. Typically in the U.S., about 15% of unemployed people are among the “long-term unemployed,” meaning they’ve been out of a job for more than six months. After the Great Recession, that share reached 45%, and even today it’s still 37%. The long-term unemployed suffer not just economically but also socially: they have higher rates of divorce, depression and suicide.

Will those people ever work again? Many experts say no, because research shows that employers often discriminate against the long-term unemployed and also their skills tend to atrophy. “More than ever before, skill erosion will be a major obstacle for those who wish to return to the workforce,” declared a recent Conference Board report. And then there’s another group: the baby boomers dropping out of the workforce who had likely planned to retire anyway but may have pushed the decision up by a few years because of gloomy work prospects. Historically, few such people ever return to the workforce once they leave.

So what does all this mean for the price of your mortgage or car loan? The amount of slack in the labor market is one of the key factors helping the Fed decide whether to raise interest rates. When markets are slack, or too many people who want work don’t have it, wages and prices stay down. But if labor markets get tight, wages go up, and that causes inflation. When inflation starts to rise, so do interest rates.

But inflation is tricky. It moves fast and often unexpectedly, which means it’s important for central bankers to try to anticipate it. That’s why there are vigorous disagreements about what to make of these latest numbers. Economists who see the bulk of labor-market dropouts as a lost cause believe they don’t really matter with respect to inflation. The short-term unemployment rate, which they believe is a better measure of the true slack in the labor market, is just a little more than 6%, right around where it ought to be historically. And important metrics, like the National Federation of Independent Business survey, show the labor market is as tight as it was in 2005. Whatever the unemployment rate, we may not have enough workers with the right skills. And a tighter labor market implies that inflation could come on sooner rather than later–and that rates could rise as early as 2015.

Plenty of people in the fed believe that could and should happen, but chair Janet Yellen isn’t one of them. Yellen recently said, “My own view is that a significant amount of the decline in [labor] participation during the recovery is due to slack, another sign that help from the Fed can still be effective.” The data on her side include the recent disproportionate declines in the unemployment rate for lower-income workers. The idea is that companies are starting by hiring cheap labor and they’ll eventually hire more workers higher up the pay scale. There’s also the fact that right before the Great Recession, there was a nascent trend toward older workers staying in the workforce longer, in part because of better health and the desire to work but also perhaps out of necessity: the average retirement savings of Americans ages 55 to 64 is about $120,000, not enough to fund anyone’s golden years.

If that’s the case, we may see many of those longer-term unemployed people come back into the workforce, keeping inflation (and rates) lower for longer. In economics, three’s a trend. The next two months of data will be crucial in understanding where labor markets, interest rates and the price of your debt are headed. 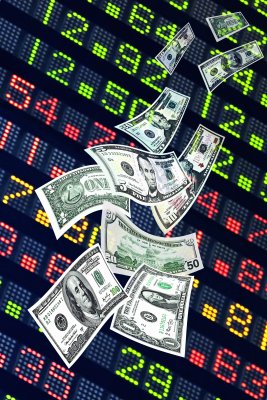 The World's Mania for Economic Data Is Pretty Silly
Next Up: Editor's Pick