In the Exchange Hotel’s pub in Kalgoorlie, Western Australia, Kasey Wallace, still in his dusty, bright orange mine uniform, is celebrating with his half brother Blake Morgan with a beer — or six. Wallace, 18, just drove home from work. A drive home might seem like a flimsy excuse for a drink, but Wallace has a daunting commute: a 730-km journey north to an iron mine on mostly dirt roads. “You did it, mate,” says Morgan, clinking beers with Wallace. “Though, next time you might want to consider flying.”

The two order another round from a “skimpy” — local argot for barmaids flown in from the Gold Coast on the other side of Australia to strip while they serve. The more they’re tipped, the less they wear. Nearly all of Kalgoorlie’s 26 bars employ skimpies. A few ladies at another pub down the road, Wallace confides, are professional strippers who’ll add a lap dance for the right amount of money. And for those looking for the ultimate gratification, there are legal brothels on Hay Street, one of which just had a $5.4 million renovation. “Can you tell,” Morgan laments, “that there are three times more men than women here?” The half brothers are also celebrating a new apartment they just rented together in Kalgoorlie, population 35,000 and a six-hour drive from anywhere, for $1,440 a month.

“I used to do fly-in-fly-out,” Wallace says, referring to miners who fly to remote sites for grueling shifts that last weeks. “But I don’t do it anymore. Who wants to work 12 hours a day?”

Morgan is a semiretired concreter at the ripe old age of 21. He’s saved enough money from previous stints to coast for a while, and he wants to focus on a potential career in motocross — a popular sport in a state nearly four times the size of Texas and 70% desert or semiarid land. Morgan says he spent $210,000 on motocross last year. “I could’ve gone all the way, but too many broken bones, too much alcohol and drugs.” He shrugs. He’s got the time and money to make another go of it.

This is what it’s like to be young and rich in Western Australia, home to the largest number, per capita, of self-made millionaires in the world. The boys take lavish surfing holidays to Bali or gambling expeditions to Las Vegas. Anywhere else they’d be making a third of their salaries, but because of the insane demand for workers in Western Australia, they can pretty much name their price.

The massive red deserts of Western Australia are some of the least hospitable places on the planet. Temperatures regularly top 49°C. The region is full of deadly creatures, from snakes to scorpions to spiders. The week I was there, two people were medically evacuated for snakebites, and the radio drilled constant warnings about how summer is deadly spider season. There are plagues of locusts. What little scrub exists is under almost constant risk of brush fire. And the ground is literally sewn with salt: the water table is six times saltier than the ocean, creating giant white dots where water once pooled. Though divided into quaint-sounding shires, the terrain is more akin to Mordor. So why would anyone choose to work here?

Billions of reasons. Underneath the red earth is a wealth of natural resources. In 2012 — 13, Western Australia produced 513 million tons — or $55 billion worth — of iron ore, $6 billion worth of crude oil, $12 billion in liquefied natural gas and $8.7 billion in gold. Overall, the state accounts for 40% of Australia’s exports. U.S. companies have poured more than $82 billion into the territory, making it the top recipient of private U.S. investment in the world. Driven by Chinese demand, the resources boom has led Australia to a quarter-century straight of growth.

Western Australia feels a bit like the Alaskan gold rush, the Texas oil boom and Michigan’s iron age rolled into one and set in a Mad Max movie, only the motorcycle-riding gangs are motorcycle-riding millionaires. Taken as its own country, Western Australia’s gross state product of more than $88,000 would place it at the top of GDP-per-capita rankings, behind the likes of Luxembourg and Qatar. Despite an influx of more than 600,000 people over the past 10 years, Western Australia enjoys just 5.1% unemployment. Colossal wages have led to the formation of Australia’s own class of Beverly Hillbillies, or “cashed-up bogans,” as they’re called in Perth, the only city in Western Australia. In the past decade, Perth has been transformed into a playground of the very wealthy. “This is a bit like the Wild West,” says Perth Lord Mayor Lisa Scaffidi.

The Globe’s Magnet
How long can the run last? As every miner knows, natural resources are a finite commodity, and Western Australia has a long history of boom-and-bust. Gold was first found here in 1848. In the 1960s, oil and gas off the coast and massive iron veins were discovered. The state also boasts some of the world’s largest deposits of silver, nickel, uranium, rare-earth minerals, marble and granite. But, by the time the demand for gold and nickel plateaued in the 1990s, Perth was dismissed as the “most isolated capital city in the world,” Scaffidi says. “We felt like a satellite bureau to the East Coast.” Then China surged. Perth is within a two-hour time zone of 60% of the world’s population, a population seeking entrance to the middle class. Western Australia was perfectly positioned to help realize that dream, but first it had to find the workforce to build the massive infrastructure required to extract and export the resources.

To do so, Western Australia pulled blue collar workers from all over Australia and New Zealand, driving up wages as well as further bolstering the commodities sector and the Australian dollar by extension. Why be a cab driver in Sydney making $40,000 a year, when you can drive trucks to the mines for an annual $200,000? Why be a plumber in Melbourne unstopping people’s toilets for $45,000 a year when you can earn three times that fixing hydraulic joints — essentially giant elbow pipes? And construction is construction, whether building a hotel or pouring concrete cylinders. The territory’s population has increased in the past decade by nearly 30% to 2.5 million people. Some, like Wallace, drive in and out, but the majority live in Perth, making them the largest flying mining workforce on the planet.

In Osborne Park, a suburb north of Perth, there exists a road that can only be described as a giant shopping mall for the superrich. The Ferrari and Maserati dealer is just down the street from the cigarette-speedboat store. Want a new pool? A spa? A Rolls-Royce? All these, jet skis, ATVs and custom home theaters are for the offering. Downtown, Chanel, Tiffany’s and Louis Vuitton have set up shop. Perth boasts a world-class casino and legal brothels. The housing market is tight: little stock and incredibly pricey. Australia’s most expensive home is in Perth’s suburbs, a $53.5 million spread owned by mining magnate Chris Ellison. The boom has also helped drive up real estate prices in the few tiny mining towns that resist the desert. Homes go for $1 million in Kalgoorlie.

In the Exchange’s pub, “Big Bad” John McKay, 62, props a dusty boot on the dusty metal trough that runs at the bottom of the bar, a remnant from the days when miners used to urinate at their stools, saving them a trip away from their beer. “The old way of mining, of taking pride in your work, is dying,” he grumbles. “The streets are paved with gold until they aren’t.” Most analysts agree this cycle of expansion is now over, with many companies choosing to pay dividends in the past six months rather than invest in new projects. But with ever voracious Asia nearby, the pause isn’t expected to last more than a few years. There’s still $240 billion in committed projects in the pipeline and another $316 billion worth being considered, says Steve Knott, CEO of the Australian Mines and Metals Association. For now, Western Australia’s yellow brick road stretches far into the shimmering desert. 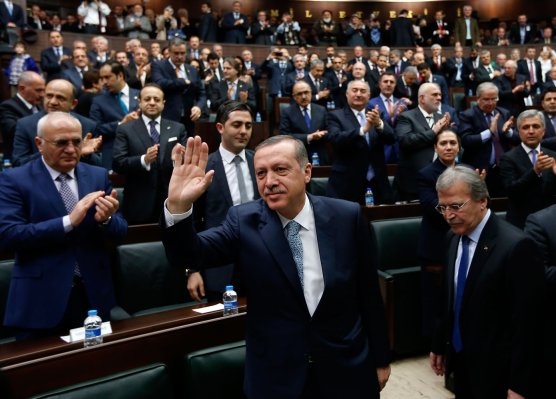 Can Turkey’s Erdogan Stay in Power?
Next Up: Editor's Pick