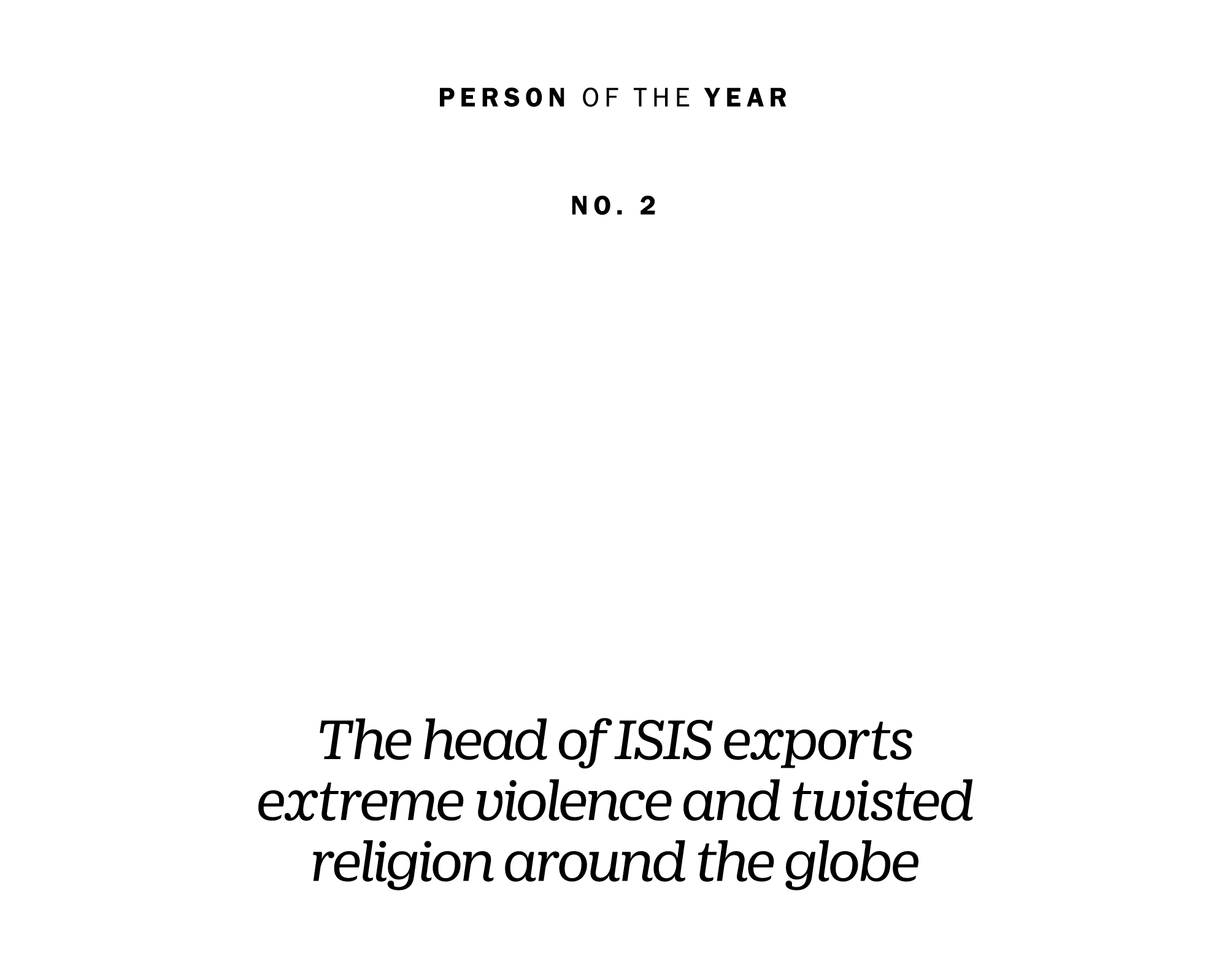 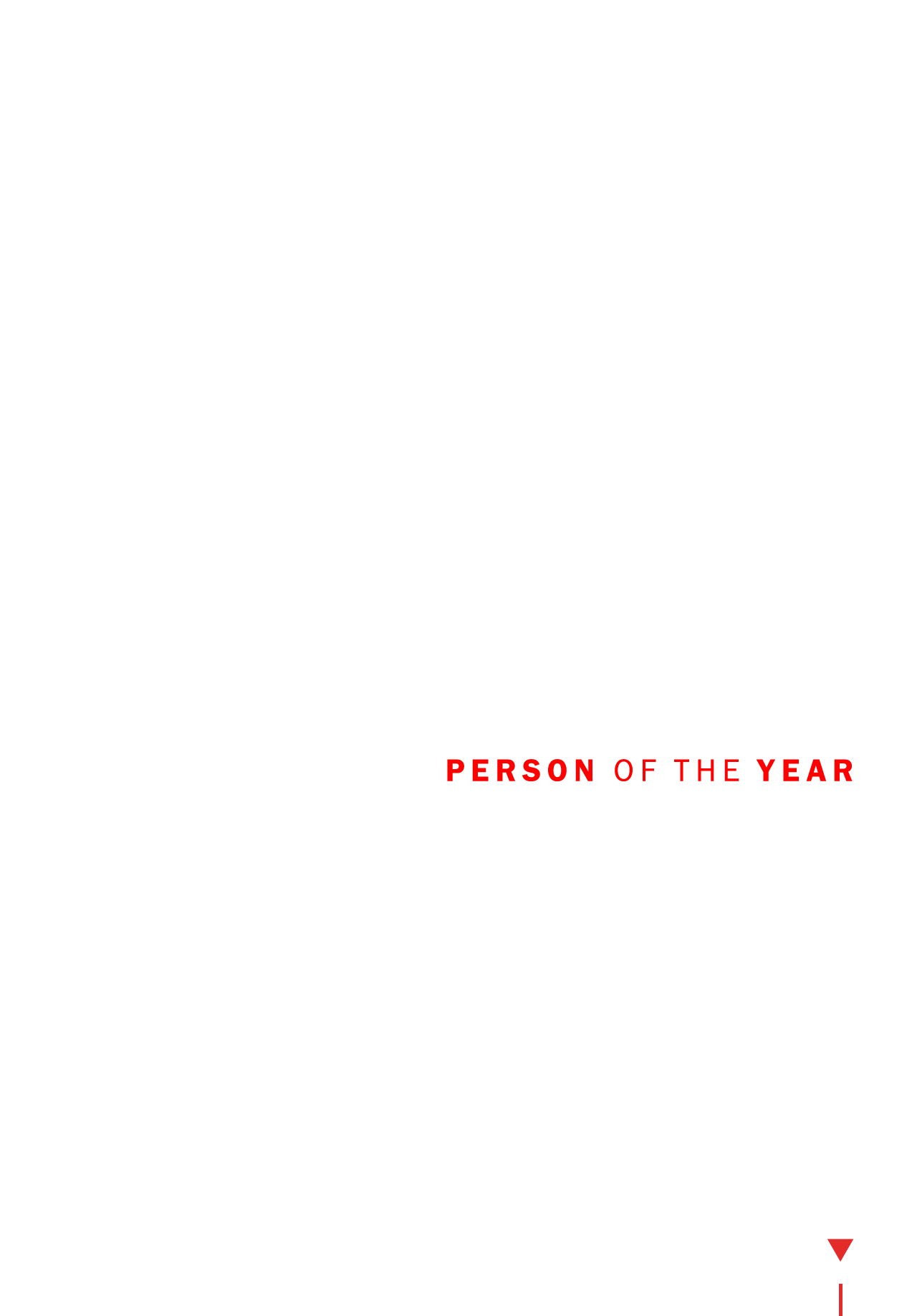 By Massimo Calabresi
Illustration by Piotr Lesniak for TIME

They rallied to his call: the violent and the suicidal, the lawless and the fanatical, gathering in cyberspace from around the world to pledge allegiance to his self-proclaimed caliphate. Some acted in his name in the real world, killing hundreds of innocents at hotels, mosques and concert halls from Paris to the Sinai, Beirut to San Bernardino. A handful of adherents were close to him, like the woman who ran his sex-slave operation. Others were thousands of miles away yet under his command and control, like those behind the attacks in France on Nov. 13 that killed 130 people. Still others may have had no more connection to him than a declaration of allegiance on Facebook—like Tashfeen Malik, who posted right before she and her partner killed 14 people in Southern California on Dec. 2. He is Abu Bakr al-Baghdadi, the brooding muezzin of death who leads ISIS.

In 2015, al-Baghdadi, 44, transformed the breakaway al-Qaeda group from a battlefield force operating in the chaos of Syria and Iraq into a transnational terrorist franchise killing civilians in more than a dozen countries around the world. Orchestrating deadly attacks against far-flung targets—including sports stadiums, beach resorts and museums—ISIS has killed more than 1,200 civilian victims outside of Iraq and Syria this year while luring a steady stream of recruits to the so-called Islamic State.

His most immediate goal was the recruitment of fighters for his military operations in what was once the cradle of civilization. Each month al-Baghdadi’s war machine chews through 1,000 fighters, 50 to 60 of them suicide bombers used for basic combat maneuvers. Most are foreign fighters, and as al-Baghdadi expands his ambitions, his need for them increases. Accepting pledges of fealty from forces as far away as Nigeria and Pakistan, he has established a total of nine putative ISIS provinces outside of Iraq and Syria since June 2014. U.S. officials believe his attacks abroad are another way for him to call to their death those followers desperate or deluded enough to kill themselves for him on the battlefield.

Like other magnetic extremists, al-Baghdadi has learned—through an up-and-down career marked by losses and victories in prison cells and palaces—to be a master opportunist. He did not create Middle Eastern anarchy or invent the Internet, but he has seized on them both for his purposes. Likewise, he leverages his own biography. A member of an Iraqi tribe that claims lineal descent from the Prophet Muhammad, al-Baghdadi turned an early affinity for Quranic recitation into a grandiose claim to be the caliph, or theocratic leader fit to rule an Islamic empire.

While his control of captured oil fields and profits from kidnapping and smuggling give ISIS considerable staying power, few experts believe that al-Baghdadi’s radical ideology poses a strategic threat to the states of Europe and the U.S. But he has proved his ability to challenge accepted Western values in ways few expected a year ago. The ISIS attacks in Paris moved the Socialist government of France to declare, and then extend for three months, a state of emergency and propose changes to its constitution that would expand police powers. And a post-Paris backlash against Syrian and Iraqi refugees has particularly weakened support for the U.S.’s long-standing program to resettle displaced victims of war and conflict.

Along the way, al-Baghdadi has roused powerful enemies. Russia escalated its attacks against ISIS forces after the bombing of a St. Petersburg–bound jet on Oct. 31 that killed all 224 people on board. France responded to the Paris assault with air strikes on al-Baghdadi’s would-be capital, the town of Raqqa in northern Syria. Germany and Britain, hesitant participants in the U.S.-led coalition fighting ISIS in Syria, have stepped up their involvement. And two years after President Barack Obama pledged not to put “boots on the ground” in Syria, the Pentagon announced in early December the deployment of 100 to 150 U.S. special forces to conduct raids against ISIS in Syria and Iraq. “Definitely, we want to eliminate him,” says one senior Administration official of the man who would be caliph.

His transformative year began on Jan. 7, when the insouciant French satirical newspaper Charlie Hebdo tweeted an image of al-Baghdadi in his pulpit wishing everyone “good health.” In an apparent coincidence, homegrown French Islamic militants tied to al-Qaeda attacked the paper almost as the tweet was posted, killing several of its leading editors and cartoonists. The following day, according to news reports, a close friend of the two Hebdo attackers, Amedy Coulibaly, received and deleted an email from Syria instructing him to “work alone” and “pick the easiest and most certain targets.” Coulibaly shot a policewoman dead in a Paris suburb on Jan. 8, then killed four people at a kosher market on Jan. 9. Police later discovered Coulibaly’s video pledge of allegiance to ISIS.

The rest of 2015 was a red tide of ISIS terrorism. In January, an ISIS-linked group attacked a hotel in Tripoli, Libya, favored by diplomats and businessmen. At least nine people were killed, including an American. In March, ISIS claimed responsibility for an attack on the national museum in Tunis that killed 22 people, mostly European tourists. In June, an attack at a Tunisian beach resort killed 38 people. Halfway through the year, ISIS had killed more than 450 civilians outside of Iraq and Syria.

Inside those collapsing countries, al-Baghdadi’s fortunes waxed and waned as he fought other extremists, U.S.-backed forces and the regime of Syrian dictator Bashar Assad, who has killed more civilians there than anyone else. In March and April, Iraqi forces drove ISIS out of the city of Tikrit amid U.S. claims to have reduced Iraqi territory under al-Baghdadi’s control by as much as 25%. The following month, ISIS forces struck back, capturing the city of Ramadi and crushing U.S. hopes that Iraqi troops could defeat this enemy on their own. Later in May, ISIS seized the Syrian city of Palmyra, where al-Baghdadi’s forces looted historic archaeological sites, then destroyed what was left.

When U.S. raiders killed a top ISIS logistics officer and captured his wife, known as Umm Sayyaf, officials got a grim look inside the life of the supposed holy man. During interrogation, Umm Sayyaf acknowledged that she ran the operation that turned captured women and girls into sex slaves for ISIS soldiers. She also revealed that American aid worker Kayla Mueller, who had been taken captive in Syria in August 2013, was al-Baghdadi’s personal slave, whom he raped and tortured before her death in early 2015, according to Mueller’s family members who were briefed by the FBI.

With the downing of a St. Petersburg–bound Metro-jet flight over the Sinai peninsula—the deadliest ISIS attack on civilians abroad thus far—al-Baghdadi extended his terrorism into the skies. But it was the Paris attacks on Nov. 13 that ended lingering hopes that his violence would remain regional. Three suicide bombers targeted a soccer match attended by French President François Hollande; their largely thwarted attack was followed minutes later by mass shootings at several restaurants and the slaughter of 90 people at a concert in the Bataclan theater. A senior U.S. national security official says the entire operation was “organized by someone with close ties to the leadership of ISIS.”

The young man befriended members of the Muslim Brotherhood, a region-wide dissident group of Sunni believers that was forged in the wake of World War I and was dedicated to the eventual overthrow of secular regimes in the Middle East. Widely suppressed across the region, the Brotherhood was al-Baghdadi’s route to radicalism: he joined one of its more extreme wings and helped in its organization, according to several of his biographers. He taught recitation and chanted the calls to prayer in his local Baghdad neighborhood, scolding dancers for being irreligious.

These talents didn’t register on his captors, though, who judged al-Baghdadi to be a low-risk prisoner. Released at the end of 2004, he returned to the Iraqi capital, where he pursued a doctorate and joined a series of jihadi groups invigorated by the fall of Saddam Hussein and the U.S. occupation. In early 2006, he found his ultimate home in the Iraqi al-Qaeda offshoot led by Abu Musab al-Zarqawi, a former violent criminal from Jordan whom U.S. forces killed that June. Al-Baghdadi’s nominal religious qualifications and rigid dogmatism carried him quickly through the ranks, and in May 2010, after the U.S. killed the only two men above him, he emerged as the emir.

And the world had finally taken notice. Along with his ambitious territorial goals in the Middle East, al-Baghdadi has elaborated an apocalyptic vision of a final battle between the forces of radical Islam and the West. In a Ramadan sermon delivered in mid-2014, he declared slavery to be the universal human condition: Muslim believers are indentured to Allah, while nonbelievers are the rightful property of Muslims. He also said the time of death for each man and woman is pre-ordained, implying that all killings must be the will of Allah. This teaching paved the way for his chief spokesman to deliver the following message to ISIS supporters everywhere a few months later: “If you can kill a disbelieving American or European,” the spokesman said, “kill the disbeliever whether he is civilian or military.”

As Muslims worldwide reject al-Baghdadi’s call to death, Obama and other world leaders have promised to attack ISIS territory more aggressively from the air and on the ground. But some experts fear that an escalated response may cause al-Baghdadi to accelerate his attacks. “As we see them further diminished in Iraq and Syria, how much are they going to strike out?” asks the senior U.S. national security official. Whatever he does in the coming months and years, al-Baghdadi has made himself the new face of terrorism and target No. 1 in the long struggle to defend humane values. “He has proven to be a pretty effective leader in terms of this overall global jihad,” says the senior Administration official. And that means “there is a significant effort to find him.”