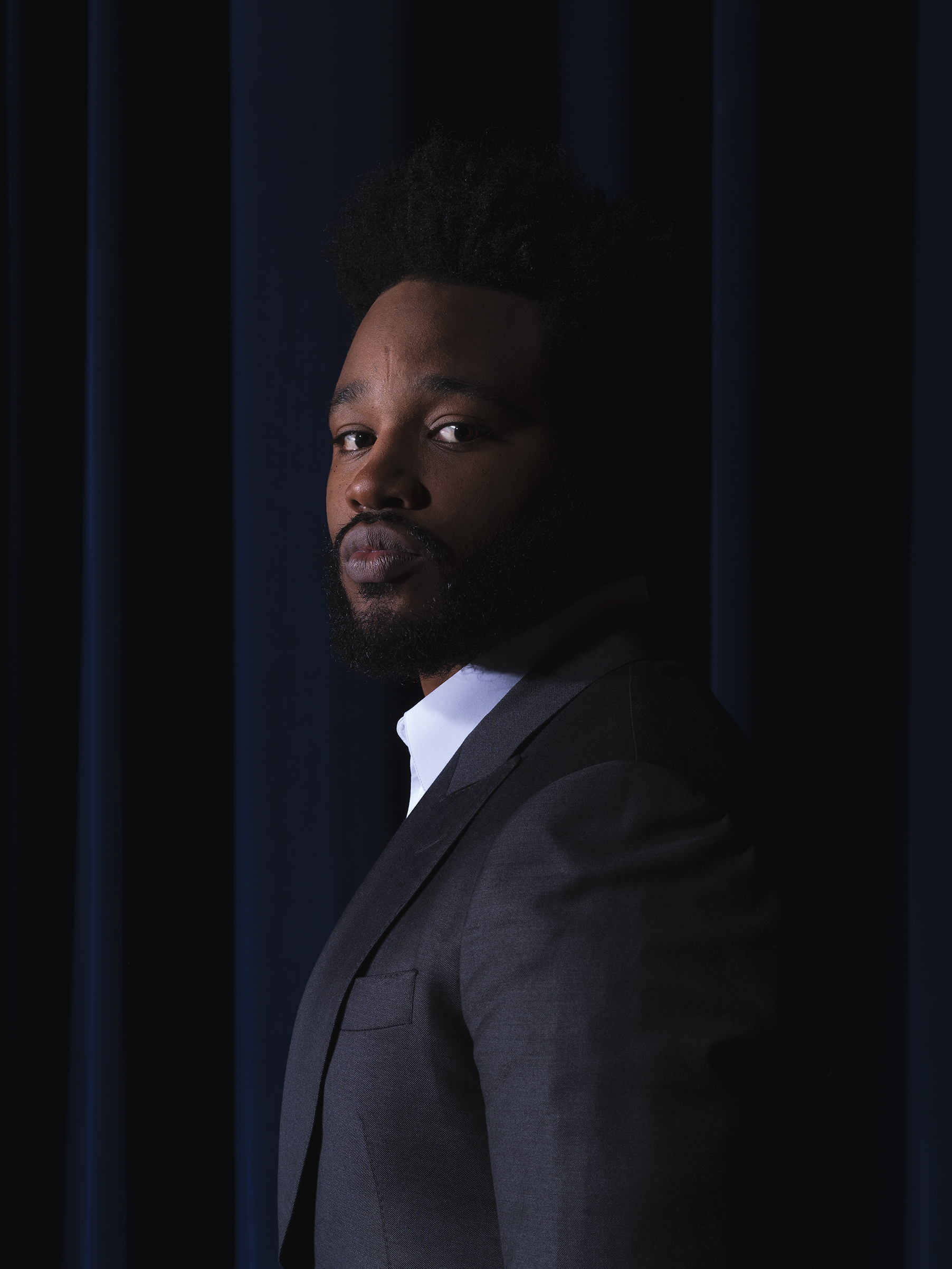 The Smith Rafael Film Center in Marin County, Calif., doesn't look anything like the places where Ryan Coogler saw movies as a child. A 1930s movie palace adorned with an art-nouveau mural of two goddesses emerging from the sea and sapphire-hued lamps illuminating the lobby, it typically plays indies and foreign films. But as Coogler makes his way inside on a rainy November day, he hears something familiar: the pounding drums from the decidedly mainstream movie he directed, Black Panther. He bobs his head to the beat, pulling off his raincoat to reveal a Jaws T-shirt.

Jaws is the kind of movie Coogler, 32, was raised on: blockbusters that play to big crowds. In many ways that's exactly the movie he made. And with Black Panther, he made an exceptionally good one—not just hugely entertaining, but smart, funny and political. Audiences ate it up. Since premiering in February, Black Panther has become the highest-grossing film of 2018 in the U.S. and smashed a handful of other records (among them: highest-grossing solo superhero launch of all time, highest-grossing film by a black director and highest-grossing film starring a primarily black cast). And it won over critics, too—this art-house screening is part of a campaign to make Black Panther the first superhero movie nominated for Best Picture at the Academy Awards.

"When you do a huge movie, some people get the wrong idea that you're selling out," says Coogler, sipping coffee in the green room next to the theater. "But I wanted to make a movie for the people."

That he did. Black Panther has done something most other megahits didn't: it reshaped the world beyond the multiplex. Coogler rendered the film's setting—the fictional nation of Wakanda, a technologically advanced African country untouched by colonialism—so vividly that it became a kind of cultural shorthand, a vision of a future where black excellence is honored instead of minimized. When the Wakandans venture out into the world, their red, green and black clothing—the colors of the pan-African flag—stand out in a sea of muted suits. When Lupita Nyong'o's Nakia whips off a heel and wields it as a weapon, it's a feminist statement—in this film, women do the rescuing. When audiences first see Wakanda, the light seems to dazzle for a reason: it's an aspirational vision of the world.

With Black Panther, Coogler didn't just bear the burden of weighty expectations, he exceeded them. "This was a sea change in terms of people being able to feel proud about creating culturally specific films," says Rhea Combs, curator of film and photography at the National Museum of African American History and Culture. "There has been a long-standing argument about who will appreciate what type of film, and this movie ended that conversation."

Coogler was born in Oakland. His mother, a community organizer, and his father, a juvenile-probation counselor, moved the family to Richmond, Calif., when he was 8. They sent him and his siblings to Catholic school, where Coogler played football and was good enough to get a college scholarship. There, a professor in a creative writing class suggested screenwriting. Coogler went on to film school at the University of Southern California.

After graduating, he began developing what would become his first feature film, Fruitvale Station, the true story of Oakland native Oscar Grant, an unarmed man who was shot in the back by a police officer. To make ends meet, Coogler took a job as a counselor alongside his father at the Juvenile Detention Center in San Francisco. He has said his time there helped him better understand Grant, whose life was intertwined with the criminal-justice system. The film went on to win the Grand Jury Prize and the Audience Award at Sundance in 2013.

"Fruitvale was about the community that I grew up in, and I wanted nothing more than for people in communities like that to see it," Coogler says. "But when you make an indie film, the theaters that play it tend to be very specific. Those types of films didn't play at the multiplexes in my neighborhood."

His next movie got a lot closer. He had grown up watching the Rocky movies with his dad, and wanted to explore the racial dynamic in those films. In 2015, his spin-off, Creed, which starred Fruitvale leading man Michael B. Jordan, grossed nearly $174 million at the global box office.

Soon after, Disney began courting him to direct Black Panther, which would be Marvel's first superhero film with a protagonist who wasn't white. Coogler told the studio what was important to him: he had been thinking a lot about identity as it related to being of African descent, and the differences between cultures in the diaspora. He knew he needed to go to Africa, a place he had never been. "For me to do this film," Coogler says, "I wanted to spend time there."

Disney said yes. "It was clear 10 minutes into the meeting that he was interviewing us, not the other way around," says Kevin Feige, the head of Marvel Studios. "This movie started in the soul of this young filmmaker, and people can feel that when they watch it." Coogler was just 29—the youngest director in Marvel's history.

Coogler brought back prints from the Maasai tribe for Black Panther's all-female guard, and music that Kendrick Lamar incorporated into the movie's soundtrack, which debuted at No. 1 on the Billboard 200. All of this inspired the world he dreamed up alongside co-writer Joe Robert Cole, cinematographer Rachel Morrison, composer Ludwig Göransson and the rest of a crew with which he's quick to share credit. In their telling, the superhero world is as fraught and complex as reality. The film centers on T'Challa (Chadwick Boseman), the king of Wakanda, whose claim to the throne is threatened by rival Erik Killmonger (Jordan). Killmonger convinces a faction of Wakandans, whose advanced technology has long been hidden, that their superior weapons could help marginalized people across the world rise up against their oppressors. It soon becomes clear that Killmonger, villainous as he is, might have a point.

"We never wanted to say one character is right and the other wrong," Coogler says. "You get into dangerous territory if you expect the art you make to change people's minds. But if someone can watch a film and then go home and talk about it, that's doing a lot."

Superhero movies may nod at the importance of liberty or even condemn discrimination. But most of the time, those films quickly turn their attention back to blowing stuff up. Black Panther took the big questions head-on: What responsibility do people in power have to empower the oppressed? How should society deal with the scars of colonialism and slavery? How can the culture upend sexist and racist expectations of black women? "Politically, there have been a lot of tensions that have been building up," says Combs. "So to have a film that speaks to the resilience and excellence of black people, that resonated."

The fact that T'Challa listens to Killmonger—even if he doesn't agree with everything he says—helps unite audiences. "We got an opportunity to tell a story in that setting that's grappling with some of these universal themes," Coogler says. "It was like, 'We gotta try and make it work for people who we wouldn't imagine would be the target audience.'"

This may be remembered as the year that Hollywood finally realized that diversity is good business. Within the past 12 months, Crazy Rich Asians became the highest-grossing romantic comedy in a decade; the Golden Globes nominated a record number of movies made by directors of color; and the boom in TV production has given new platforms to a broader range of creators.

He is apprehensive about spreading himself too thin. "If I am producing, am I as good of a director? I ask myself that a lot," he says. Moreover, he adds, there are fundamental issues with the way the entertainment industry discusses inclusion. "People throw around words like trend and moment," Coogler says. "Those words imply that it's going to come to an end and things are going to go back to normal. I think this is a situation where normal isn't really normal. The norm is wrong."

Coogler still feels like an outsider in Hollywood. "I'm not in the rooms consistently enough to say if the conversation has changed," he says. "And when I am in the room, they're not going to be talking about that—because I'm there."

The former athlete compares the film industry to the NBA. "At some point, someone thought it's risky to put a black person on the court, that people wouldn't buy tickets. Now owners are like, 'I just want to win games, and I want the best player,'" he says. "What I hope, for this industry, is we're transitioning from it even being a question that movies made by people of color or minorities are a risk."

Black Panther proved that a black superhero could make money. And that may lead studios to believe that a Latinx superhero or Muslim superhero or a queer superhero could make plenty of money, too. (Marvel is reportedly fast-tracking an Asian superhero movie.) But Coogler proved something else that's not as easy to quantify: in a year marked by division, a movie can unite people. Black Panther is important not just because of the tickets it sold—but also because of the way it made people feel.

Back at the screening in Marin, Black Panther is playing to a rapt audience. The film ends with a prescient declaration from T'Challa: "In times of crisis, the wise build bridges, but the foolish build barriers." The line draws mumbles and nods from the audience. It's just a few days after the U.S. Border Patrol fired tear gas into a crowd of migrants at the U.S.-Mexico border.

Next door to the theater, Coogler is talking about the movies he saw on the big screen as a child. When he was six, he watched Spike Lee's Malcolm X at Oakland's Grand Lake Theater while perched on his father's lap so he could see. "I had never seen a black man that powerful onscreen," Coogler says. When Malcolm died in the film, father and son wept together.

Coogler looks down at his coffee for a moment, wary of inviting comparisons between himself and Lee, one of his role models. But the kids who donned Black Panther masks or replaced dolls of princesses with action figures of T'Challa's tech-savvy sister Shuri are starved for big-screen heroes. And Black Panther allows them to believe the same thing a young Coogler did when he saw Lee's film: that they, too, could grow up to be powerful.