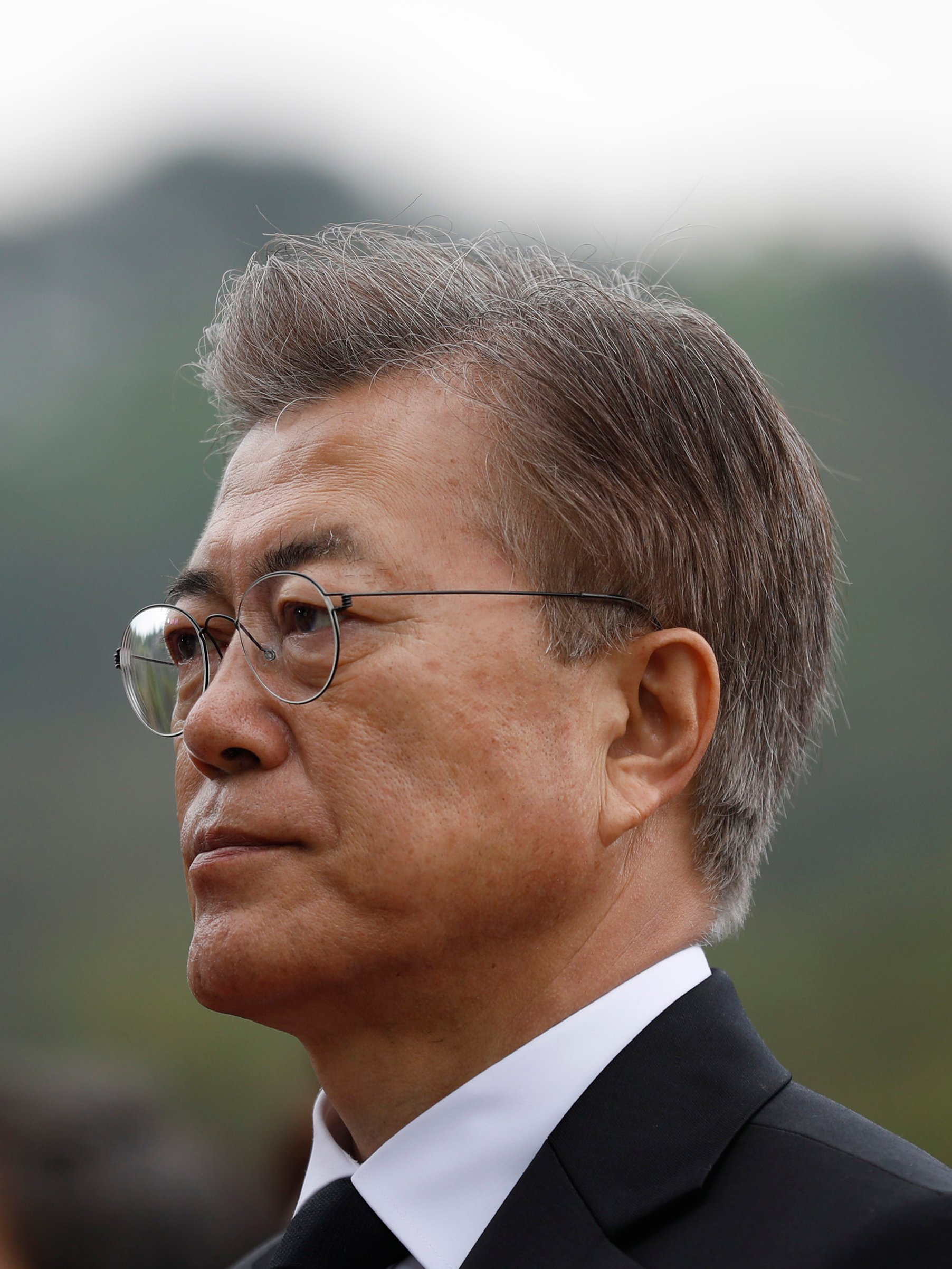 It was past midnight on May 25, and the mood in the hastily convened national-security meeting in Seoul was dark. U.S. President Donald Trump had just canceled his forthcoming summit with North Korean Supreme Leader Kim Jong Un. Although the official record describes South Korean President Moon Jae-in as simply "perplexed" by the decision, one source present reveals his actual choice of words was so unrestrained it should be considered a "national secret." But Moon has never been one for public histrionics. Instead, he got to work.

Moon quickly dispatched deputies to the White House and met Kim the next day at the demilitarized zone (DMZ) that divides the Korean Peninsula's communist and totalitarian North from its democratic South. "He persuaded the North Koreans to calm down and not to ruin the entire process," says South Korean presidential adviser Moon Chung-in. "And to President Trump he said, 'You're a great negotiator, it's a historic opportunity, don't lose it.'"

By May 27, the Singapore summit was back on—and with it Moon's bold plans to mend divisions between the nation he governs and the one his parents fled during the 1950–53 Korean War. Seven decades have passed since the East Asian peninsula was divided. In that time, the two Koreas have come to bear little resemblance. To the south, a liberal, tech-savvy, U.S.-allied democracy; in the North, an impoverished, third-generation autocracy.

Moon has long held ambitions to reunite the estranged nations. A veteran negotiator, he brokered the last summit between the leaders of North and South in 2007, when he was chief of staff to then South Korean President Roh Moo-hyun. Ten years on, he took office with a clear agenda. First, "economic cooperation, then economic integration and finally full reunification," he told TIME matter-of-factly on the campaign trail in April 2017.

But it was war that seemed more likely after Moon entered South Korea's presidential Blue House. The U.S. had a President threatening the Kim regime with "fire and fury like the world has never seen." There was talk of a strike to test Pyongyang's resolve. North Korea took the provocative step of testing a ballistic missile capable of devastating any U.S. city. Chinese Foreign Minister Wang Yi warned that the two were like "accelerating trains coming toward each other with neither side willing to give way."

Moon helped apply the brakes. Over the course of 2018, the South Korean leader has pursued measured engagement with North Korea while reassuring Washington that their alliance remains strong. Within a year of Moon-led diplomacy, Trump went from fire and fury to outright affection. After his June summit with Kim, Trump would later say of himself and the young dictator that "we fell in love."

Still, tangible progress has been slow. While Pyongyang has ceased missile and nuclear tests and returned U.S. prisoners and the remains of missing Korean War veterans, there's evidence that undeclared missile sites remain active. Negotiations with the U.S. over denuclearization remain fragile. And Moon himself has seen domestic support wane as South Korea's economy stutters.

Yet on the Korean Peninsula, there's a sense not just of a global crisis averted but also a new path ahead. Some experts say the way was cleared by North Korea completing its nuclear program. Others cite unprecedented U.N. sanctions driven, in part, by the Trump Administration. But for Ri Myoung, a senior North Korean official who defected to Seoul and uses a pseudonym for security, one man deserves the credit: "North Korea is actively engaging in denuclearization because of Moon Jae-in."

Moon's big opportunity came at the beginning of 2018. Since taking office, he had made clear that he would pursue re-engagement under the right conditions. So after Kim offered in his New Year's Day speech to send a delegation to February's Winter Olympics in PyeongChang, Moon seized the opportunity. The two Koreas marched under a united flag and fielded a joint women's hockey team. Moon also received Kim Jong Un's influential sister, Kim Yo Jong, on three occasions during the Games.

Moon was careful to show the visiting delegation respect and reinforce a common sense of Korean pride. Tangerines were given to North Korea to be distributed among divided families; prized matsutake mushrooms were sent the other way. The focus on shared heritage was a shrewd first step. Many South Koreans are more concerned with the personal than the geopolitical, especially the one-fifth of the country with extended family in the North. "It's economic, it's diplomatic. It's demographic, it's social," says David Kang, director of the University of Southern California's Korean Studies Institute. "Nukes are just one strand of a much larger issue for all Koreans."

The show of unity at the Olympics sparked a backlash among South Korean conservatives, who clashed with riot police and burned North Korean flags. But sports diplomacy paid real dividends, prompting a series of meetings between North and South that led to a historic summit on April 27, where Kim became the first North Korean leader to step across the border line and visit the South. The two delegations mixed easily, clinking porcelain cups of soju, the Korean spirit.

The Panmunjom Declaration that emerged from the meeting sought a formal end to the Korean War and the "complete denuclearization" of the peninsula. The two leaders were photographed chatting together on a blue footbridge in the DMZ, with neither minders nor microphones within earshot. There, Kim reportedly told Moon, "If we engage with the Americans more frequently and build trust with them, why should we have nuclear weapons and suffer from it?"

Asked whether he would truly engage in denuclearization talks, Kim put his integrity on the line, saying, "Do you think I am the kind of person [to break my word]?" According to the defector Ri, "For Kim to invoke his honor means he must have been sincere."

Moon's next task was persuading the U.S. to play along. He had already begun the process of getting into Trump's good graces in November 2017, when the new President addressed the South Korean parliament. There, Trump was introduced as "leader of the world." Moon hailed him as "already making America great again" and vaunted his skill as a dealmaker. Later he would say Trump deserved the Nobel Peace Prize.

In appealing to Trump's ego, Moon was perhaps following the playbook of Japan's hawkish Prime Minister Shinzo Abe, who wooed the former reality-TV star over rounds of golf. But the South Korean leader's associates say his diplomatic style is heartfelt. "Real diplomacy comes from authenticity," Moon Chung-in says. "President Moon never tells jokes, doesn't play golf, but he's very warm and sincere, and conveys his intentions as they are."

Moon helped broker talks during the George W. Bush Administration, when hundreds of millions of dollars was funneled from the South to the North under the so-called Sunshine Policy, driving a wedge between Seoul and Washington. This time Moon sought to do things differently. He insisted that rapprochement happen within the orbit of the U.S.–South Korea alliance and that no money change hands. "I wouldn't say we were naive before," says an official who worked both in Roh's and Moon's administrations and requested anonymity to speak about confidential deliberations. "But we have learned lessons."

In March, Moon took a gamble by sending his diplomats to Washington with a written invitation to Trump from Kim, seeking a meeting. If the mercurial President reacted badly, then any hope of a diplomatic breakthrough would vanish. Moon saw it as vital to deliver the message undistorted in hope of breaking the escalation cycle. "The situation was so bad at the time, we were under real threat of military attack," says the same administration source. "Our entire future was at stake." The risk paid off, as Trump sent Moon's envoys out to the White House porch to tell the world he had agreed to meet North Korea's dictator.

And so on June 12, Kim met Trump at a lavish resort in Singapore. The event was designed to convey a momentous sense of occasion, and Trump and Kim apparently forged a connection. "He's a very talented man," Trump said of Kim. "He loves his country very much."

It was a startling elevation on the global stage for the last true hermit nation. Until 2018, North Korea wasn't officially speaking to anyone—not Russia, South Korea or even its old ally China. In his six years in power, Kim had never met another world leader. "They just weren't interested in talking," says Mark Lippert, who was U.S. ambassador to South Korea from 2014 to 2017.

Now, they can barely stop. In September, a delegation of 70 South Korean officials, religious leaders and business representatives traveled to Pyongyang. Moon and Kim had 16 hours of official talks over the two nights and three days, keeping the patter up even through meals. "The two First Ladies could hardly get a word in," says Choi Wan-kyu, a delegation member.

During the talks, Kim took particular care to treat Moon as a senior figure worthy of respect. For example, smoking before an elder is taboo in Confucian Korean society. Kim, a chain-smoker, never once lit a cigarette in front of Moon, according to Moon Chung-in and several other observers. Instead, Kim was seen turning to his wife for a surreptitious smoke when Moon was otherwise engaged. "Kim Jong Un is the absolute ruler of North Korea, but in front of President Moon, he felt constrained," says Moon Chung-in. "It was a sign of deference to Moon."

Yet while Moon has done more to reunite the two countries than any of his predecessors, North Korea's nuclear threat remains unresolved. The regime has reportedly snubbed meetings with U.S. Secretary of State Mike Pompeo, who warned on Nov. 20 that denuclearization was "lagging behind" blossoming inter-Korea ties.

There's every reason to be wary. Pyongyang reneged on denuclearization deals struck in 1992, 1994, 2005 and 2012. North Korea has refused to provide a list of its nuclear assets. And on Nov. 12, the Center for Strategic and International Studies, a Washington, D.C., think tank, revealed 13 suspected secret missile facilities. The two sides have yet to agree what "denuclearization" actually means.

In the face of this, Seoul's call to weaken sanctions on North Korea has chafed some in D.C. "Moon's eagerness has caused Seoul to act like North Korea's lawyer, constantly urging Washington to make additional concessions, though it is Pyongyang which is in violation of 11 U.N. resolutions and in open defiance of the international community," says Bruce Klingner, a former chief of the CIA's Korea station who is now with the Heritage Foundation think tank.

If patience is running out, so is time. Moon has only a single, constitutionally mandated five-year term to leverage his relationship with Kim. His domestic popularity is also suffering from the perception that inter-Korea reconciliation has taken precedence over fixing sluggish economic growth and high youth unemployment. "We're at a very delicate inflection point," Lippert says. "Moon Jae-in has broken through some paradigms and brought the three leaders further than anyone thought possible. But the hardest tests lie ahead."

Still, look at what difference a year can make. In 2017, North Korea launched at least 20 missiles and tested a sixth nuclear bomb. In 2018, test sites were destroyed and symbolic transport links reconnected across the DMZ. Kim has shaken hands with leaders of South Korea, Singapore, China and the U.S. Moon has dragged a rogue nuclear-armed dictator in from the cold. At least as of now, the world is safer for it. —With reporting by Stephen Kim / Seoul