What Happened to the American Teenager?

In 1965, these kids spoke for their generation. Here's what happened 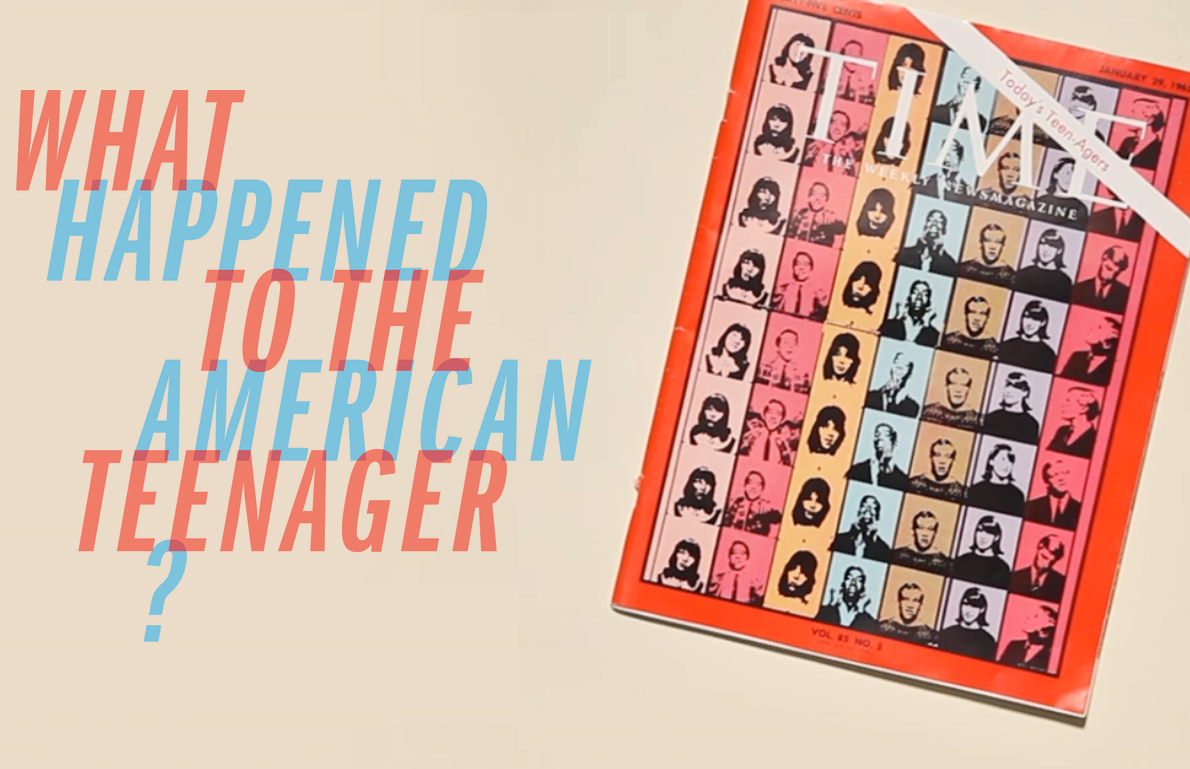 Story by Olivia B. Waxman

To be a teenager in 1965 was to have won the demographic lottery. You were the beneficiary of economic bursts created by World War II-spending. Thanks to boffo public high schools, you were learning more languages, math and science than any set of students ever before. If you were born in the late 1940s or early 1950s and a member of America’s rising middle class, you were even more likely to be college-bound. Independent and idealistic, you planned on changing the world. Your culture was new and different too, defined by school cliques, dancing the “jerk” and listening to the Beatles.

And so when the editors of TIME set out exactly 50 years ago to take the pulse of teenagers they delivered their verdict in a cover story and with a triumphant headline: “On the Fringe of a Golden Era.”

“Teen-agers today do not think of themselves as ‘knights in shining chinos’ riding forth on rockets to save the universe,” the story proclaimed on Jan. 29, 1965. “But even the coolest of them know that their careers could be almost that fantastic.”

Reporters’ conversations with students nationwide—some of whom were also profiled at greater length in a subsequent TIME-LIFE special report, The Young Americans, from which the archival pictures here are taken—were woven into a story of great optimism.

To pull the whole sunny package together, famed Pop artist Andy Warhol was drafted to create the iconic cover art. Being asked to represent one’s generation was, for the cover models at least, fun: each of those pictured were teenage relatives of TIME employees (free labor!), who went with Warhol to a photo booth in Times Square.

One of them, Jim Straus, now 67, of Chicago, recalls hamming it up for the camera. “They asked me to make faces and stick my tongue out and cross my eyes, and so I did, having not really thought this through, that these are the photographs that are going to be used on the cover,” he says. “I remember taking it to school and walking around with it facing out.”

Not every one of the story’s subjects was eager to show the issue off at school. Richard Zeiger, 67, was misidentified, as “Larry Futterman.” Leslie Harris, 66, an African-American teenager, was offended to find a description of his community under the heading “The Dung Heap.” Clyde Leland, 65, was disappointed that, after hours of interviews in his home, the article quoted him about sex, a subject he knew little about.

In a stern letter to the editor that appeared in the following issue, the principal of the main school featured in the story wrote that, “The 2,100 pupils and staff of Palisades High School resent your gross misrepresentation, innuendos and half-truths against the character of its school.” In fact, there was such disappointment among those profiled that their fellow 1965 classmates, historian David Wallechinsky and Michael Medved—who were not featured in the original story—ten years later documented “the real stories” of some of the students in a book titled, appropriately, What Really Happened to the Class of ’65?

The last innocents. What happened to them, it turned out, was something TIME could not have anticipated. Though the month of January 1965 had begun with newly re-inaugurated President Lyndon B. Johnson laying out of vision for a “Great Society” in his State of the Union address—a vision that matched the teenagers’ for optimism—it also proved to be a turning point.

When Johnson spoke to the nation, there were about 23,000 American “military advisors” in Vietnam. In the next two months, a new bombing campaign targeting North Vietnam would commence, and two Marine battalions would be deployed to South Vietnam, the first combat troops the U.S. committed to support the Saigon government. With the war came the opposition movement. University of Michigan professors canceled classes to host a “teach-in,” a two-day long antiwar seminar that March, fueling the campus anti-war movement. In the same year, the idea of the ’60s hippie—and the drug culture with which it’s linked—began to solidify.

In March 1965, on a day that became known as “Bloody Sunday,” some 600 people who marched from Selma, Ala., for voting rights were tear-gassed and beaten. Televised broadcasts of the event outraged Americans, inspiring demonstrations of support for the activists and generating broader sympathy for the civil rights cause. The war and the civil rights movement would alter the generation in a way the magazine did not predict.

“We thought we could end war, we could end racism, consumerism, we just thought we were going to make a difference,” says Elizabeth Herman, 65, one of the cover models who is now an attorney in Washington, DC. “We saw what was happening down South with German shepherds attacking civil rights workers, and we thought once people saw all this—it was obvious how awful it was—that it would just stop. And it certainly hasn’t.”

And though TIME had gushed about a generation of super students, public confidence in schools later plummeted. “[Schools] fell short of the expectations that were enumerated in TIME,” Zeiger, who is now chief deputy superintendent of the California school system, says, “and people started seeing that as a failure because we didn’t match that up.”

“The class of ’64 was the last innocent generation, and ’65-’66 were the transition,” Wallechinsky says. Though that innocence was punctured before that year–President John F. Kennedy was assassinated in 1963–there had still been a sense, at that time, that authority could be trusted. “Suddenly, there was no way you were going to respect anyone in a position of authority,” he says.

Richard Zeiger, the then-teenager who was misidentified in the story, points out an easy way to prove that something changed: Just look at what happened to The Beatles. “The Beatles were singing ‘I Wanna Hold Your Hand,’ then they became psychedelic four years later,” he says. “That is what was happening to us.”

Icing on the cake. That feeling of failure from 1965’s teenagers is paired with worry for children and grandchildren. Clyde Leland, who now teaches legal writing and public speaking to lawyers, says that today’s students don’t have time to be activists. In college, he could skip a class and not stress about the post-grad job search to participate in antiwar demonstrations because he paid a mere $93 a quarter in tuition at Berkeley. (He still lives near the school.) Likewise, Leslie Harris says he worries that this year’s demonstrations for racial justice won’t translate into long-range activism.

But, at the risk of repeating the optimistic mistake made by TIME a half-century ago, talking to several of the people quoted in the story leaves one feeling just that. Expectations went unmet and hopes unrealized, but most went on to college and started a career that embodied, in its own way, the spirit of the ’60s. Harris, who TIME noted in 1965 had “picketed the Chicago board of education to protest the skimpy treatment of Negro history in the standard public school curriculum,” went on to march with Martin Luther King, Jr. in South Deering, a neighborhood in Chicago. He recently retired as a judge in the Suffolk County Juvenile Court in Massachusetts, where he found early experiences of being manhandled by Chicago cops informed his work on the bench.

“I’m a child of the ’60s. That’s how I define myself,” Harris says. “My values and my approach to life came from my civil rights activities

Jon Holdaway, 68, who in 1965 was an 18-year-old track and choir star in Seattle, says he was inspired by John F. Kennedy to continue his education, to become a teacher and to volunteer. “Many of my friends were hippies and antiwar, and now they’re working for an insurance company and are donating to the GOP,” he says. “I’ve kept my core political values all the way through.”

Sara Greensfelder, 63, was in 1965 a 13-year-old in Marin County who volunteered for the Student Nonviolent Coordinating Committee (SNCC). She continued to remain “committed to ideals of social justice, human rights and environmentalism,” she says, and is a co-founder of the California Indian Basketweavers Association who has lived off the grid in a solar-powered home in the Sierra Nevada foothills for the past 40 years.

Elizabeth Herman followed through on her hope of making a difference by going into poverty law.

Harris, who marched with Martin Luther King, notes that he didn’t believe a black man could win a presidential race; his sons felt differently, and they proved him wrong.

“When you’re a teen, you’re going through the same issues in the ’60s as you’re going through in the 2015,” says Daniel McMurtrie, 67, an obstetrician and gynecologist from Ann Arbor, who as a teenager told TIME that it was in to ask serious questions. “There may be different icing on the cake,” he says, “but the cake’s the same.”

And a week after Warhol’s images appeared on the cover and 1965’s teenagers declared themselves on the verge of defining their era, one letter to the editor spelled out another reason not to worry for that generation of teenagers or any other: “There is nothing wrong with our teen-agers that they won’t outgrow as they get older.”