reflections on The weight of Charlottesville

Photographs and text by RUDDY ROYE for TIME

My intent to head to Virginia was purely to support the folks of Charlottesville, where white supremacists and their supporters were due to hold a rally on Aug. 12 in protest of the planned removal of a Confederate statue from a city park. To support folks like Lisa D. and John E. M. and Kaya B. and Garnette C. I had no intentions of shooting another protest—not as a news story anyway.

On the train down to Richmond, I met a fellow New Yorker, Richard S., and we talked about history. His grandfather, who is now 102 years old, has been unburdening himself with all his knowledge and especially about things he grew up reading in the newspaper, like lynchings and the burning of bodies.

I made the two and a half hour drive to Charlottesville with a friend, as a medley of reggae tunes played in the background. Once in town, as we approached Main Street, we were immediately confronted with a young lady, wailing. There were men with automatic rifles. Word was spreading of an attack by a motorist that had taken place about an hour before I arrived.

You could immediately tell that there was a shift in the air. The militia was packing up their guns. The supremacists and their supporters were nowhere to be seen. All that was left was the oppressive feeling of “why?” mixed with tears and the dampened spirit of an extinguished march.

It felt like I was walking behind a tragic story. Peeling back the faces of residents who wept openly. This was not what I had imagined the night before. I thought I was going to see clashes between anarchists and nationalists. I thought there would be standoffs at the statues and monuments. Instead I watched like a drone as people made their way from the epicenters of conflict to the open alley where Heather Heyer was mowed down.

It was here that I really lifted the camera to my eyes and began listening to the people’s words. I saw their anger, their frustrations and their truths. I listened to their pain, their disgust and their dying hope. It was here that I felt the heaviness that I could not explain the whole time I was there.

I spent the next two days attending vigils, one after the next, executing the same zombie-like shuffle that the residents of Charlottesville appeared to be moving in as they made their way up and down Main Street. Restaurants that were closed over the weekend had reopened with morning meditation notes on their menu boards. The magician who drove from Richmond was back for his 25-minute performances. The streets all seemed to recalibrate. By the time I left on Monday, it seemed most of the other photographers had left the city, leaving only the television crews to tell the story.

‘I saw the attack’ 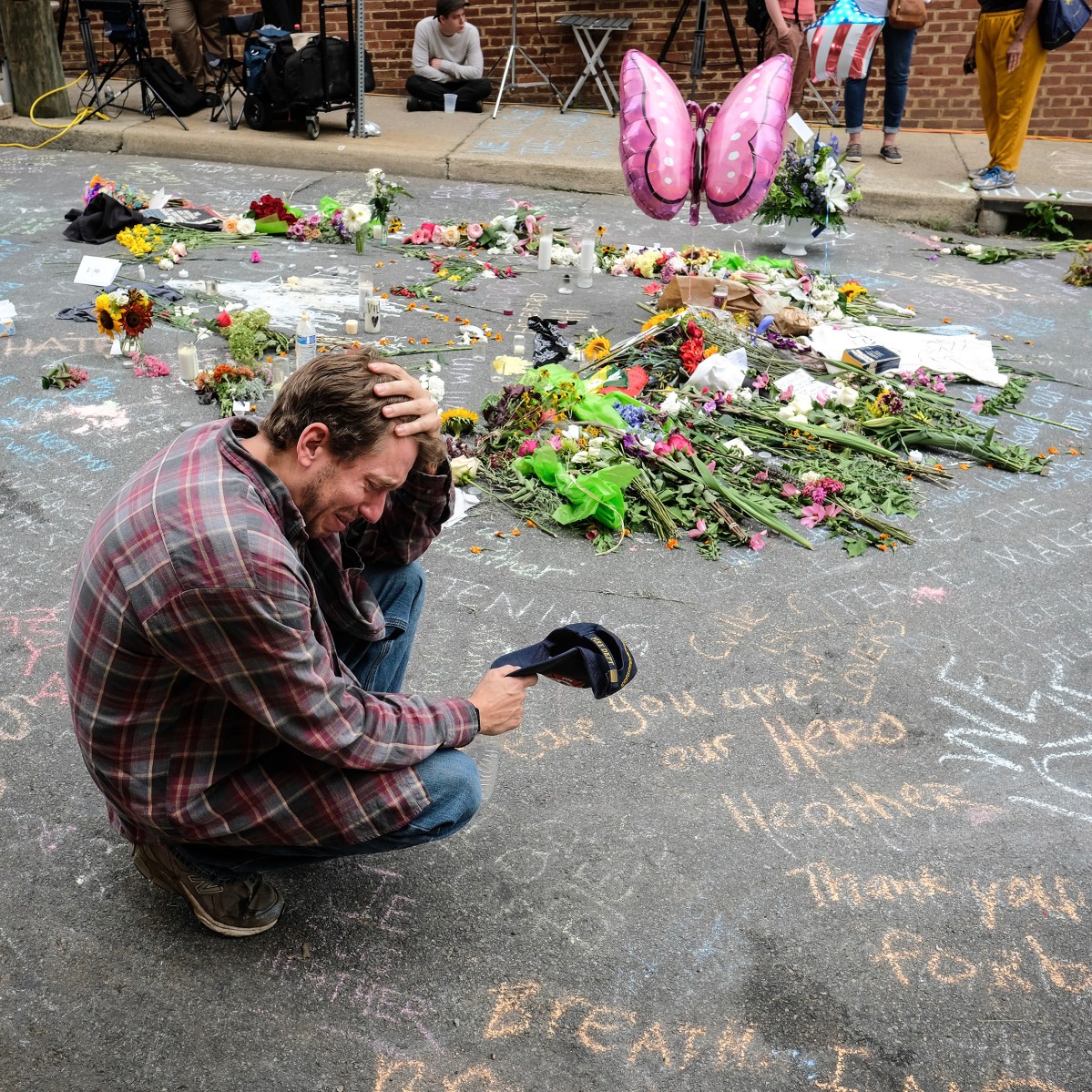 Jake Westley Anderson stooped in the same spot where Heather Heyer died on Aug. 12. Heyer was the sole fatality when a car rammed into a group of protesters marching in the downtown area. “I am a journalist,” Anderson told me. “We were here filming all the fights and watching the police who did not intervene.”

“I was also a part of the march and that is when he did it. He drove straight into the crowd. I saw it, I saw the attack,” he recalled. “I went through the crowd. I went towards her, watching medics try to revive her. I could not tell if she was okay.” Pointing to the bloody sidewalk, he said, “I saw her right there.”

‘There is a history here’ 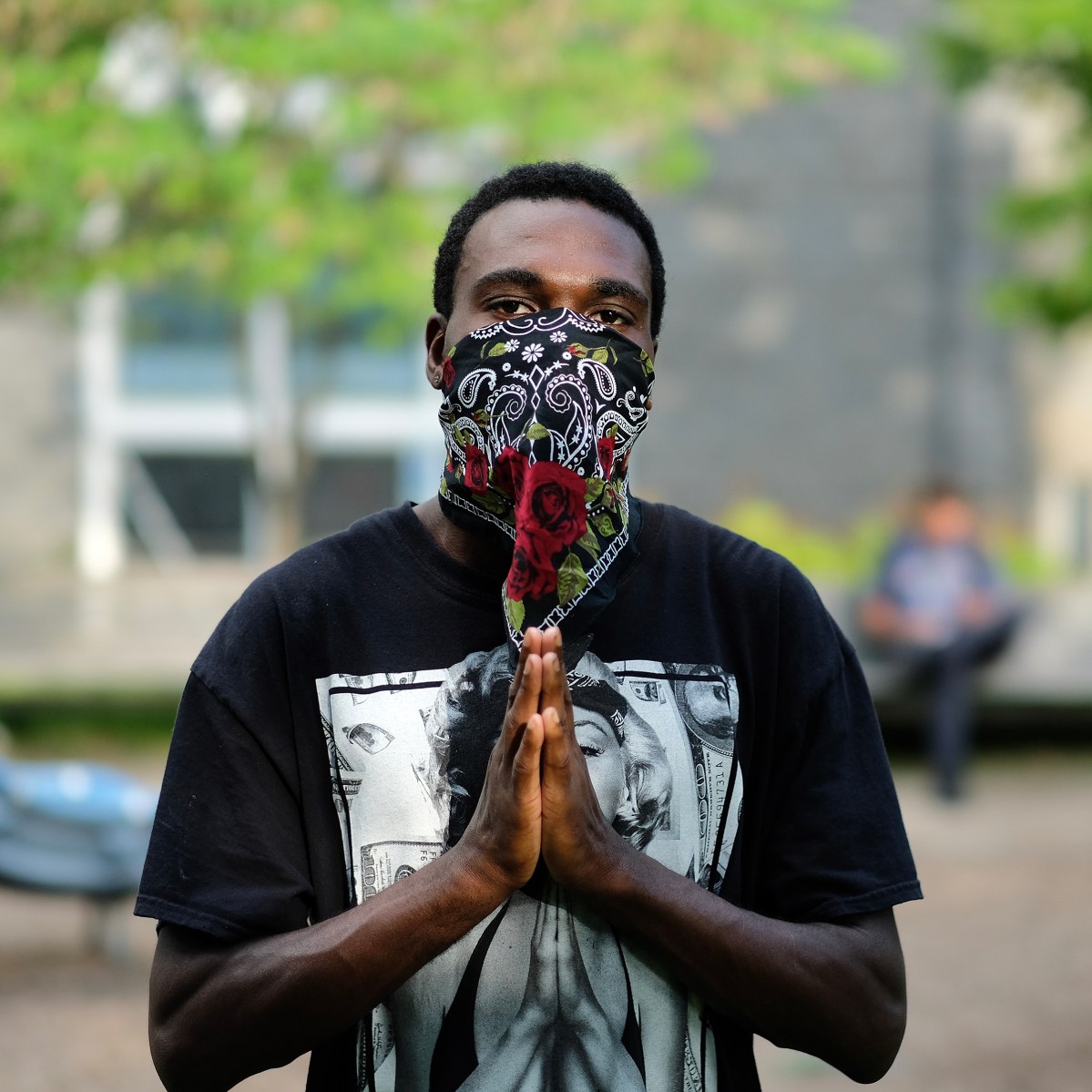 “I came out to make a stand for my people. We cannot continue to let these things happen,” Antonio Mitchell told me in the days after the violence.

“I recently moved to Charlottesville from Atlanta for my family and to have a different lifestyle,” he said. “There is a history here and I understand, but we as a people have to stand up strong to change it. I am here to take that stand.” 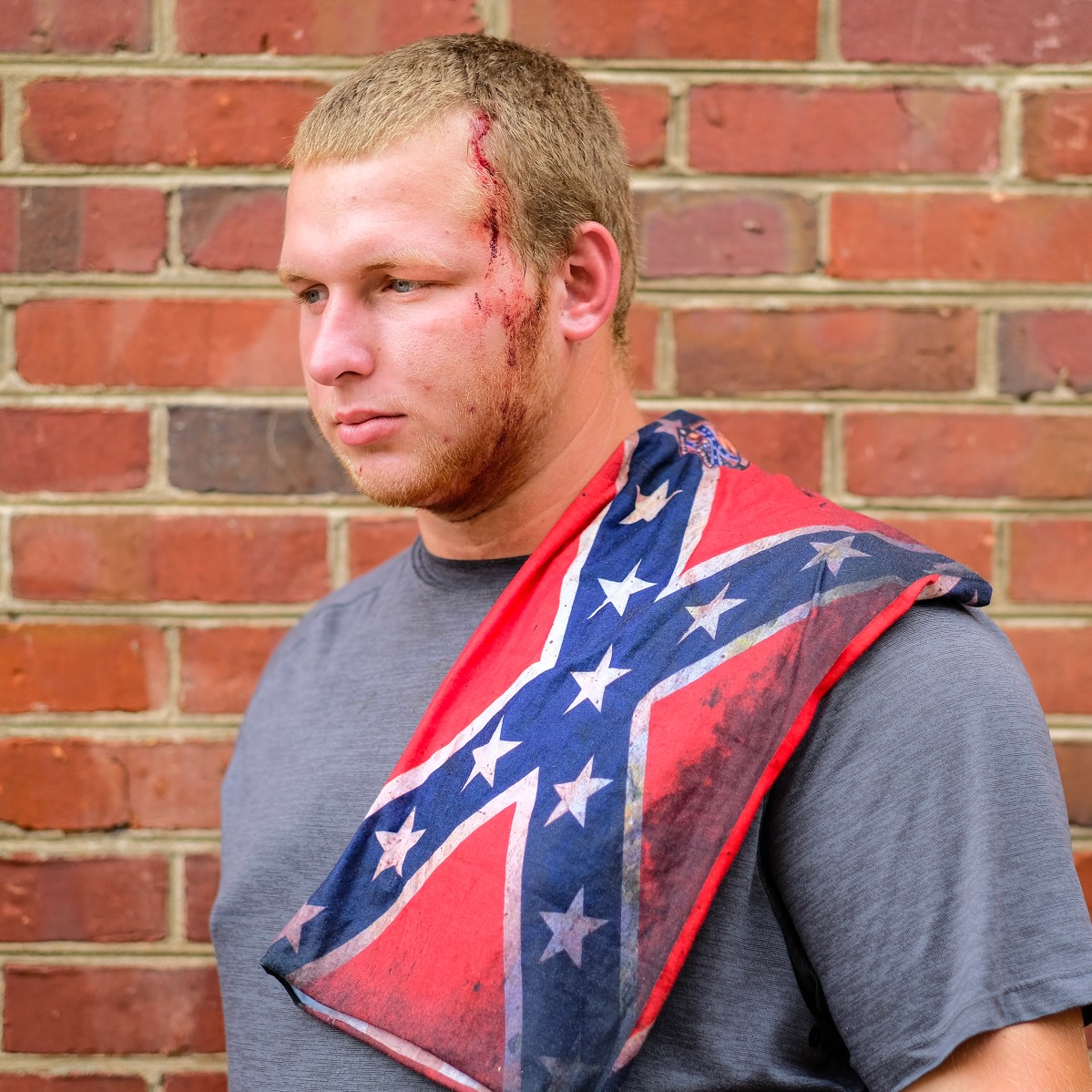 Darrell Vaughn from near Roanoke, Va., attended the protest in Charlottesville to stand up for what he called his history and culture.

No sooner after arriving, Vaughn said he was “ambushed” by a group of men and women. He said he was hit in the face by what he thought was a billy club.

‘We don’t want a fascist America’ 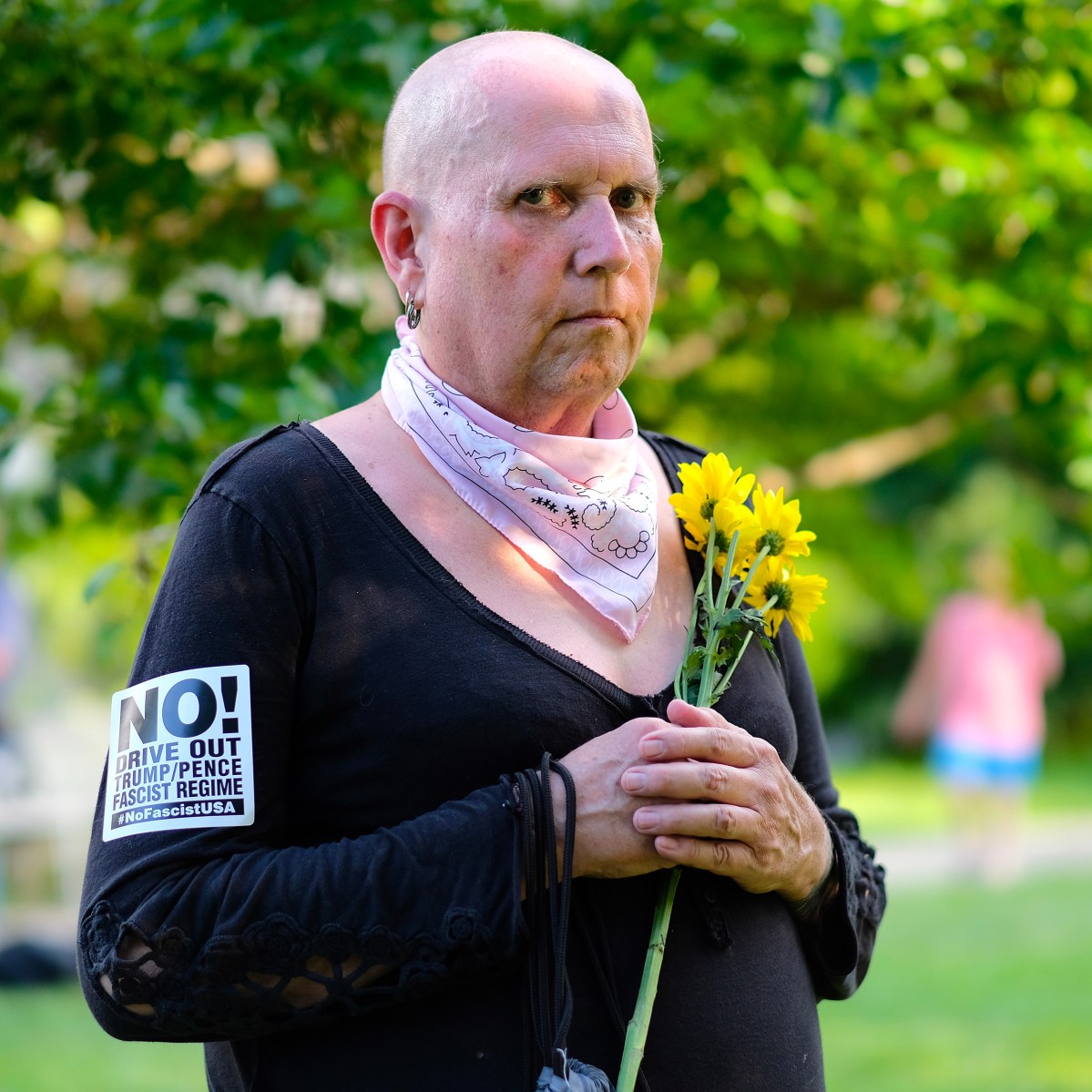 Lilith held her yellow flower against her chest and said she was a proud member of the Refuse Fascism Group. “We don’t want a fascist America, and we certainly don’t want one in Charlottesville,” she said at a vigil held at McGuffey Park on Aug. 13.

“When the racist[s] come to demonstrate their power, we come to show how weak they really are.” Scores of people poured into the park after some had witnessed the vehicle mow down a section of protesters.

‘Trayvon was my first’ 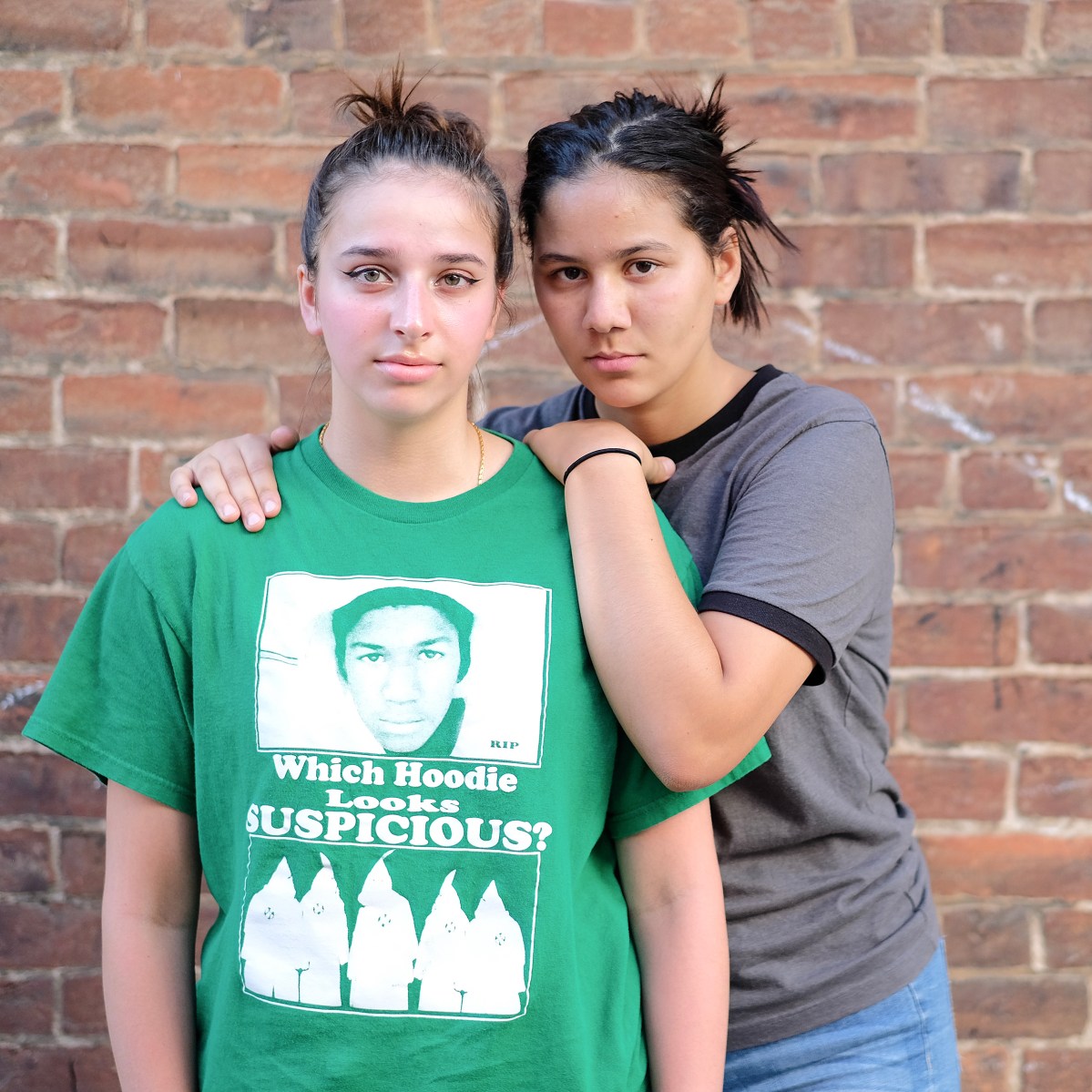 Sherin Nowrouz, left, and her friend Chaimaa Oualia traveled two hours to Charlottesville because “we saw how the KKK were being allowed to protest freely here while the blacks here were being beaten and harassed. It was sickening to us.”

The pair had trouble gathering a group to make the trip, or even finding a ride: “No one wanted to come.”

Nowrouz told me she has been going to Black Lives Matter protests since she was in sixth grade. “Trayvon was my first,” she said. Chaimaa said they drove down to show support for the African-American community.

‘The time is now’ 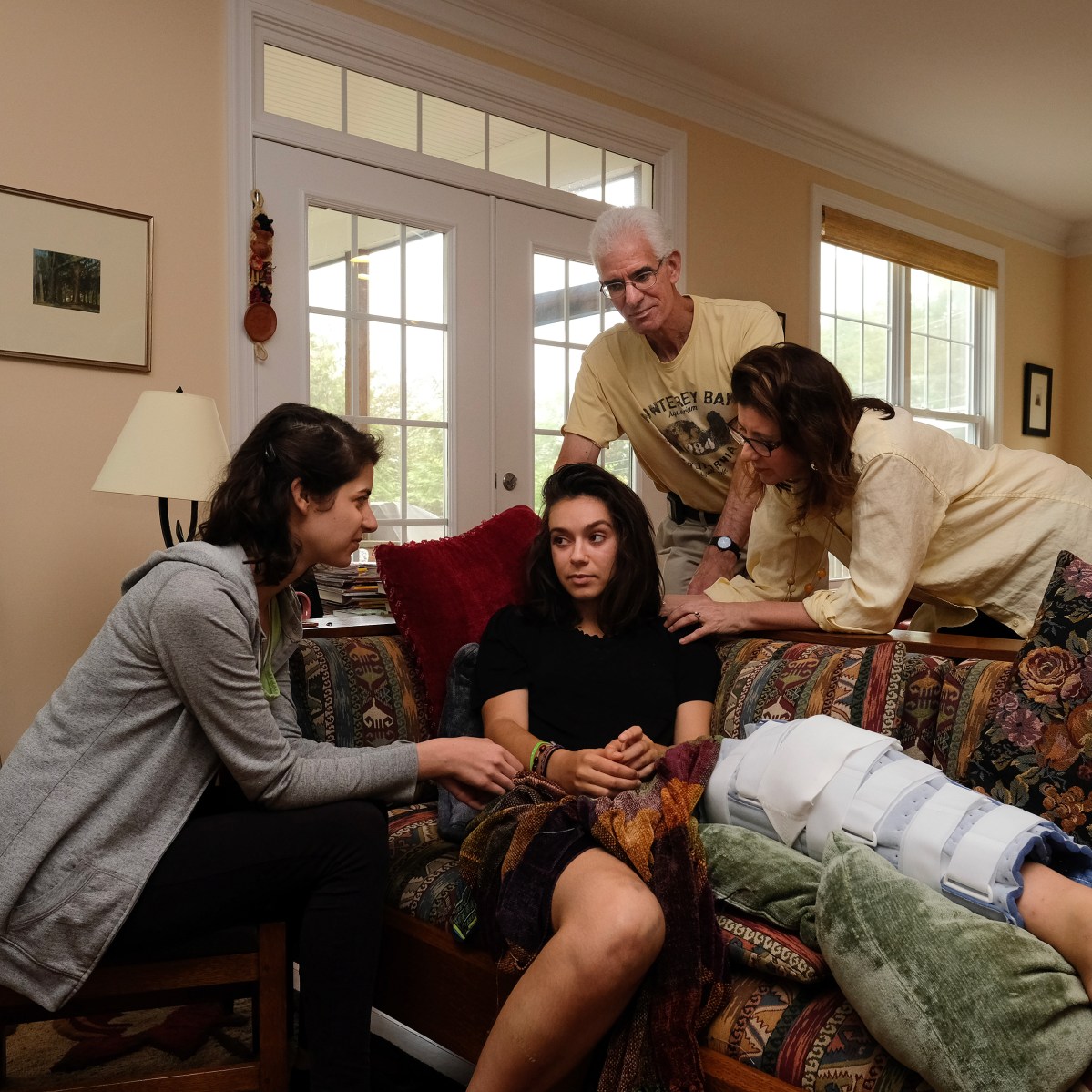 Sophie lays on her parent’s sofa, her left leg in a cast and her head bruised, bearing a line of fresh stitches. She sits beside her sister, Rebecca, who ran to her aide after she was hit by the vehicle that sped into a crowd on Saturday, and her mother Lisa and her father Joel. The last thing she remembers before blacking out was hugging a friend.

“If there was ever a time for white people to put their bodies on the line for racial justice, the time is now. I went out on Saturday to be a part of the radical love expressed by my community, including fellow UVA students,” she told me. “The violence I experienced on Saturday was short-lived compared to the violence that people of color, trans people and Muslim people face everyday.” 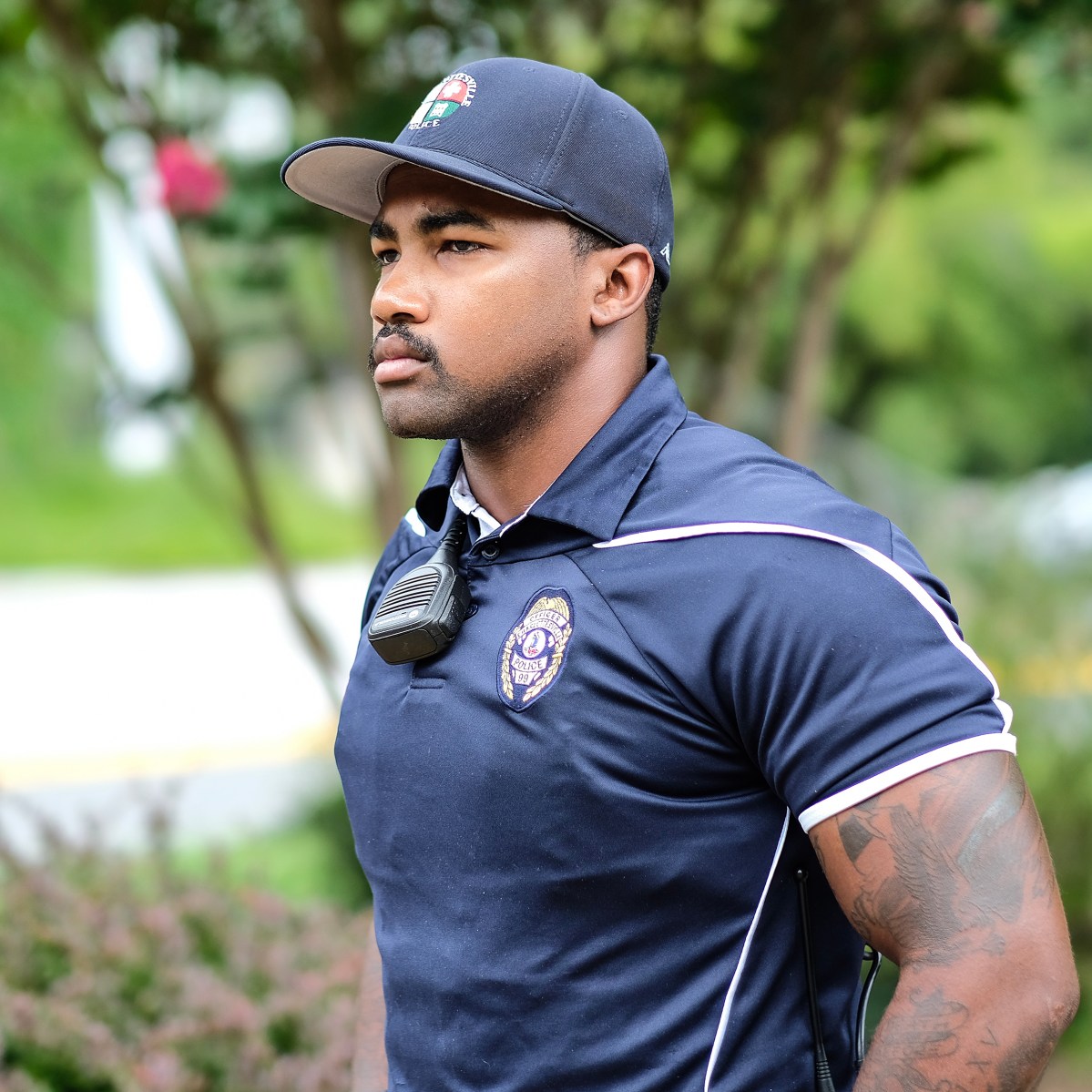 “It humbled me a whole lot, just seeing how a picture like that can reveal so much,” officer Darius Nash said. Two days earlier, a picture of Nash patrolling a KKK rally in July had found new online momentum. The image was shared widely, with some of those who did so appearing to think it was made that day.

In the uncomfortable haze of live breaking news it became the latest in a long line of photographs to be grabbed and shared without credit or context.

Nash, a school resource officer at Charlottesville High School, was appreciative of the support for law enforcement. He told me “it also brought my family closer in that they were able to see what I and other officers have to go through on a daily basis.”⠀