Spectacular Photos of Space: See Our View of the Universe

A stunning new book shows our quest to understand the universe and how our view has evolved. Take a peek inside 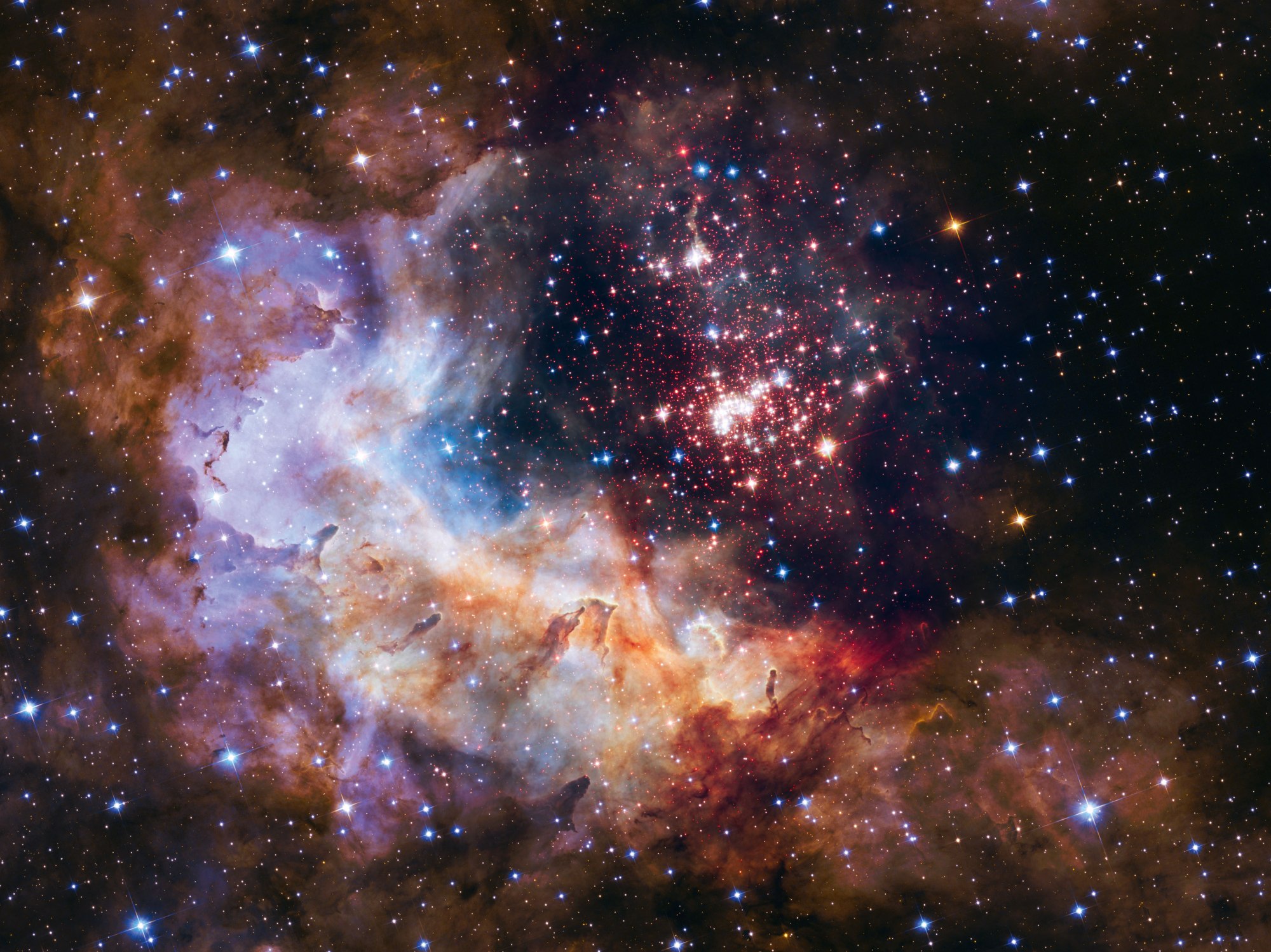 The human species is ever-changing and so is our view of the universe.

It’s easy to laugh at the ancient humans who thought of the nighttime sky as a sort of cosmic colander, but the idea made an intuitive kind of sense. In the evening, a gigantic bowl with thousands of pinprick holes is inverted over the Earth—or so the thinking went. The sun, suspended above it all, streams through in a brilliant scattering of starry points. Over the centuries, we slowly came to a clearer understanding of the structure and workings of the universe, thanks to the birth of the telescope and the steady accumulation of human knowledge. The more the stargazers learned, the more they tried to share what they were discovering with the rest of humanity.

In the stunning new book Universe: Exploring the Astronomical World, an international panel of academics, artists, astronomers and more have collected a series of engravings, paintings, sketches and photographs, showing how our view of the cosmos has slowly changed. If there is dazzle in the contemporary images, there is a sweet, naïve genius in the earlier ones. All of them reveal a species searching for answers to the grandest celestial questions—and slowly, improbably, succeeding in that quest.

OUR SOLAR SYSTEM TO OUR GALAXY 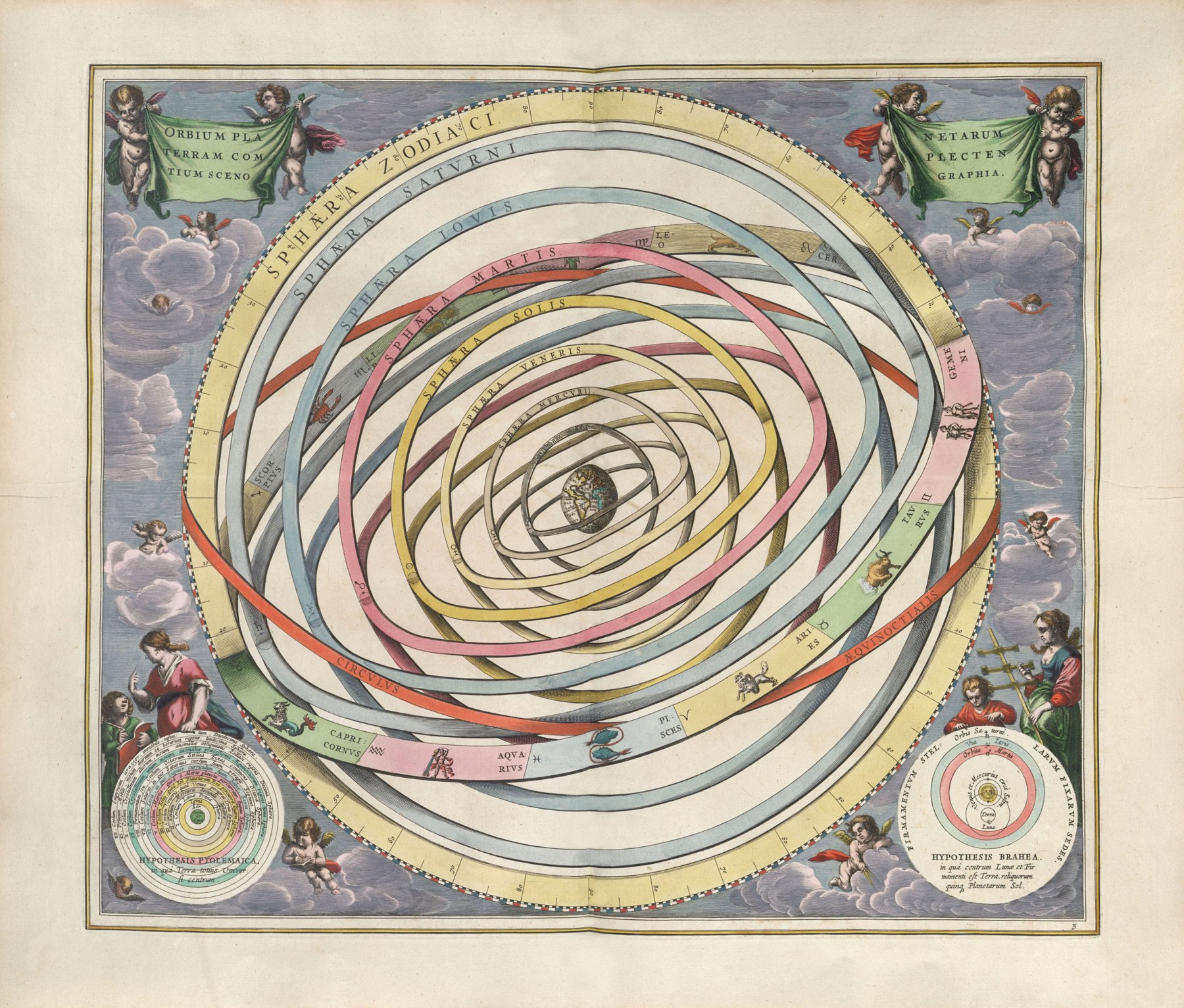 Earth-Centered Cosmos (1660): History may not remember much about Andreas Cellarius, who, in 1660, was a school rector in Hoorn, The Netherlands. But Cellarius’s magnificent rendering of the geocentric cosmos endures. The sun, planets and constellations are seen orbiting the Earth, but in the lower right hand corner, Cellarius does acknowledge an alternative theory: Danish astronomer Tycho Brahe’s model, in which most of the universe orbits the Earth, but the other five known planets circle the sun. 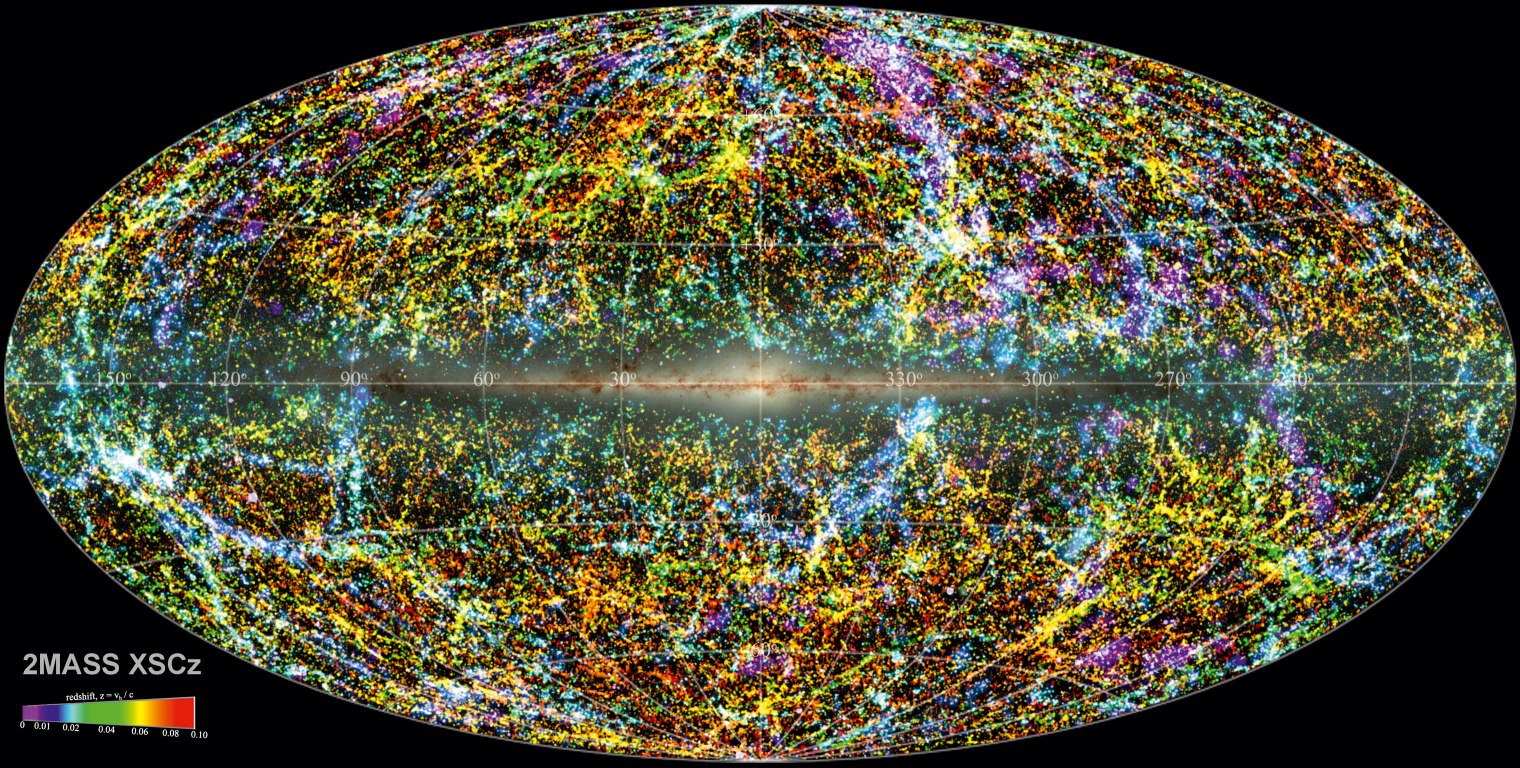 The Long View (2013): The true—and vast—complexity of the universe was captured in this vista recorded by a pair of automated telescopes, one in the U.S. and one in the Chilean desert. From our little perch inside the Milky Way, the image shows the universe stretching out for about a billion light years, which is only a small fraction of its total size. Each of the 50,000 dots represents an entire galaxy. The Earth, once believed to sit at the center of it all, is in truth a cosmic afterthought. 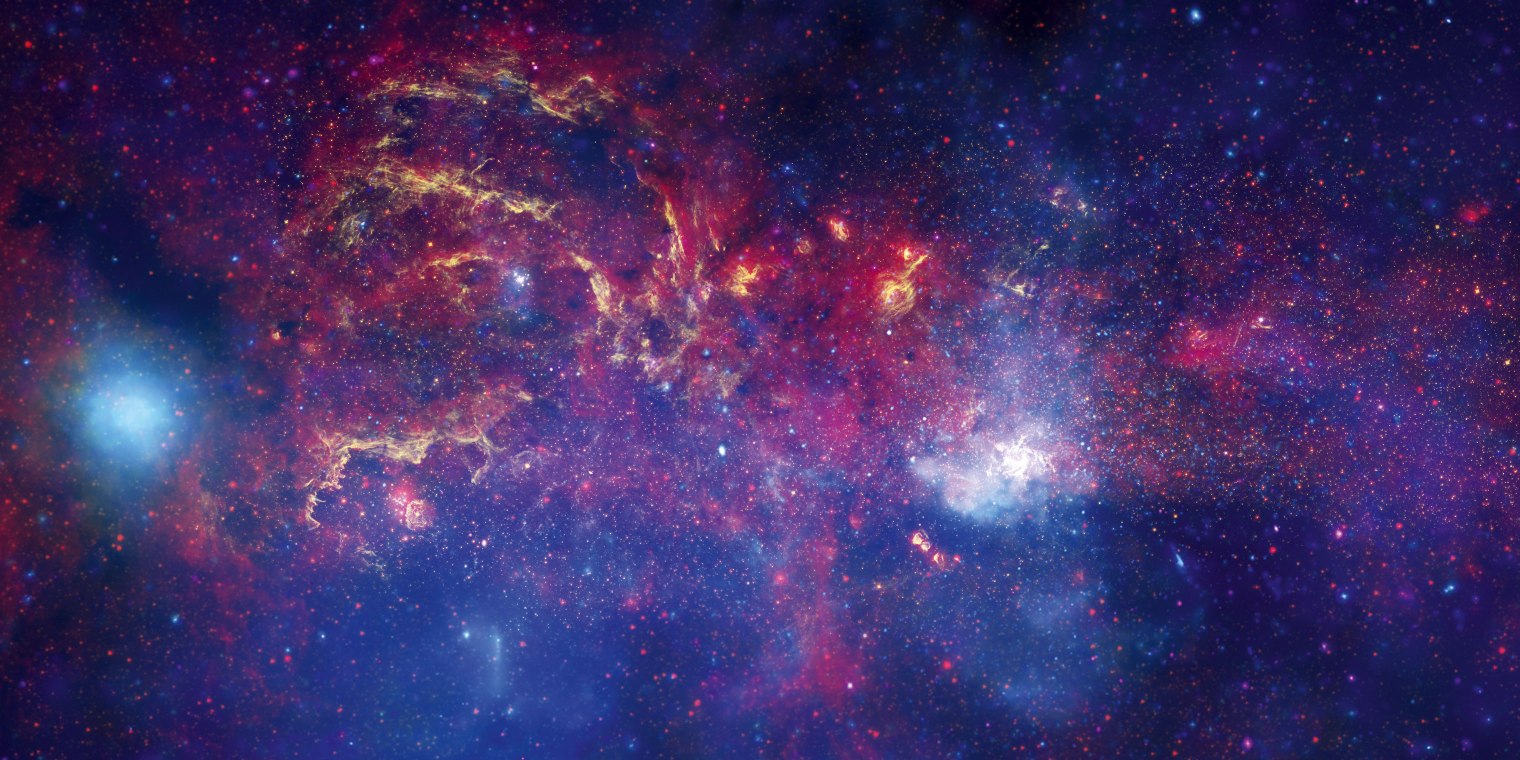 The Heart of Our Home (2009): Astronomy is usually about peering outward, but this 2009 image looks the other way, capturing the very center of the Milky Way. It was no easy feat capturing this view, which stitches together images from NASA’s Hubble, Spitzer and Chandra space telescopes. The different colors indicate different wavelengths: yellow is near-infrared, pinkish is infrared, bluish is x-rays. The bright white region in the lower right quadrant of the image is the galactic center, home to a supermassive black hole. 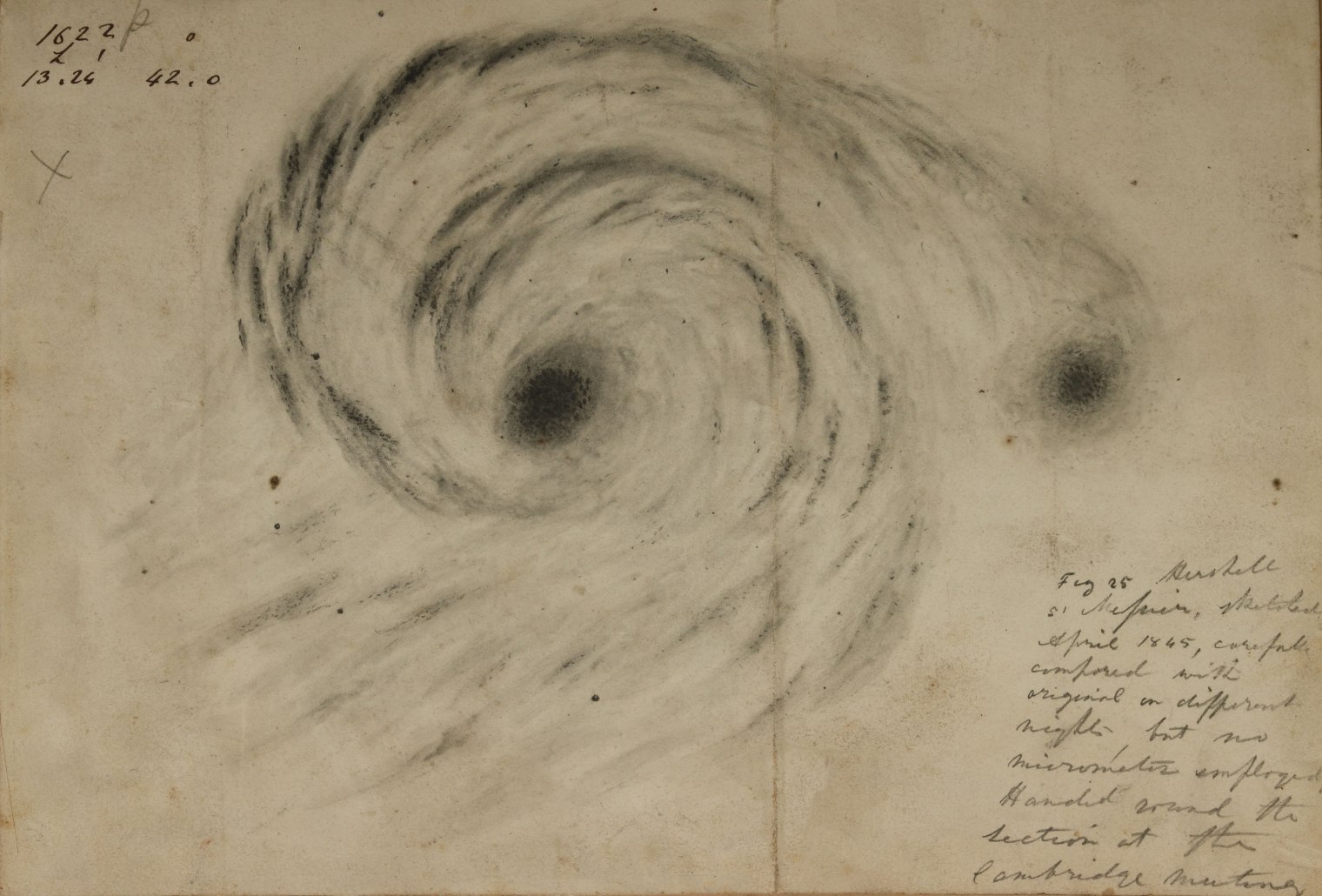 Galactic Swirl (1845): Even the grandest galaxies appear to be nothing but a small, bright smudge when seen from Earth—or at least they did until 1845. That was when William Parsons, the third Earl of Rosse, built a massive telescope with a 72-in. mirror on his estate in Ireland. With it, he and two astronomers made the first detailed observations of what we now call the Whirlpool Galaxy, located 23 million light years from Earth. The drawing was unveiled at an astronomical gathering in Cambridge months later, forever changing the 19th-century understanding of galaxies. 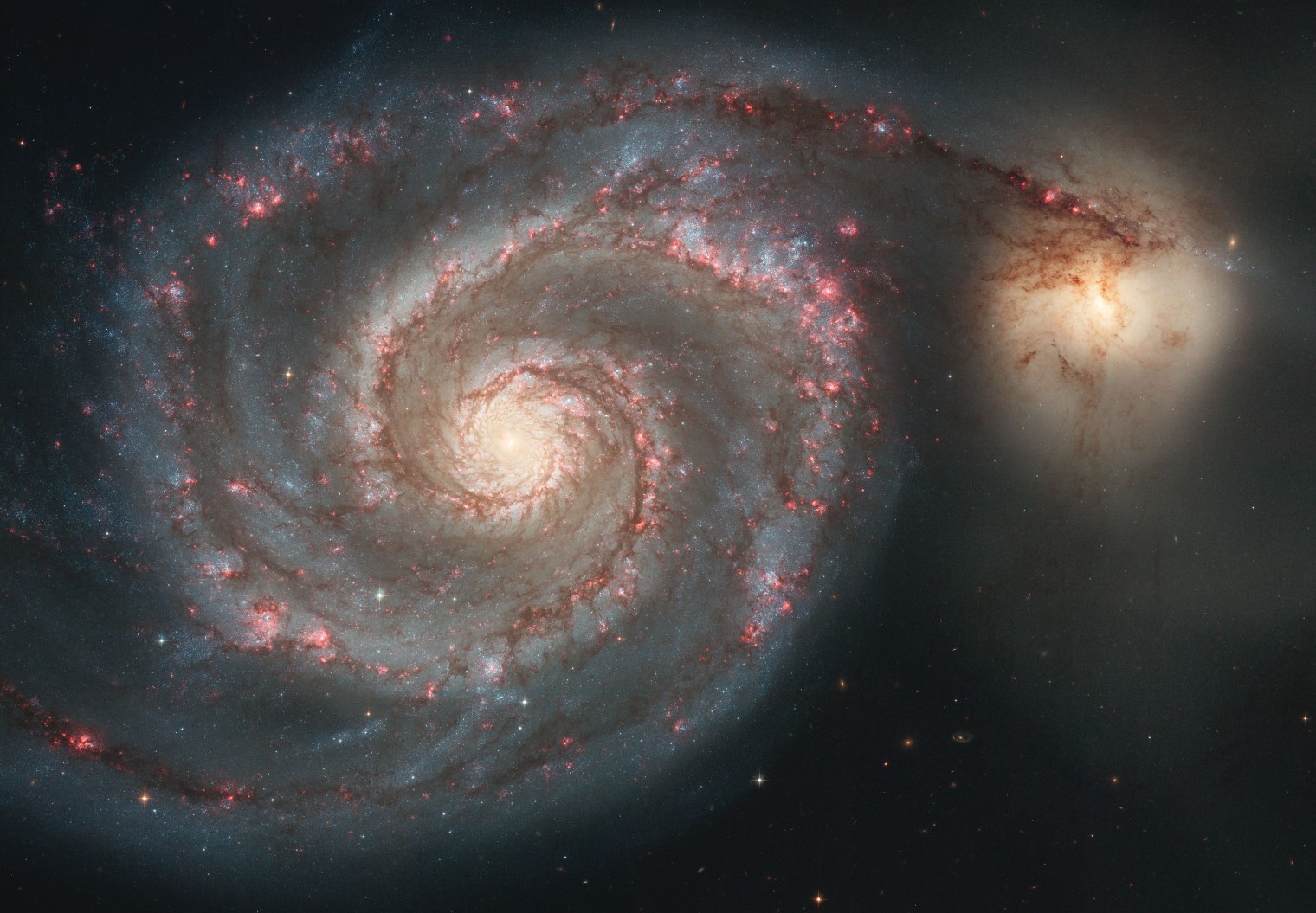 A Portrait Refined (2015): In 2005, many generations after the first historic drawing of the Whirlpool Galaxy was made, NASA released a composite picture of the same great formation, assembled from multiple images captured by the Hubble Space Telescope. The smaller body off to the right of the image—little more than a sooty-looking blotch in the 1845 sketch—is a dwarf galaxy that is slowly being reeled in by the larger mass. Astronomers are struck by images of the Whirlpool Galaxy not just because of their beauty, but because this is how our own Milky Way would appear if we could look back on it from a similar remove. 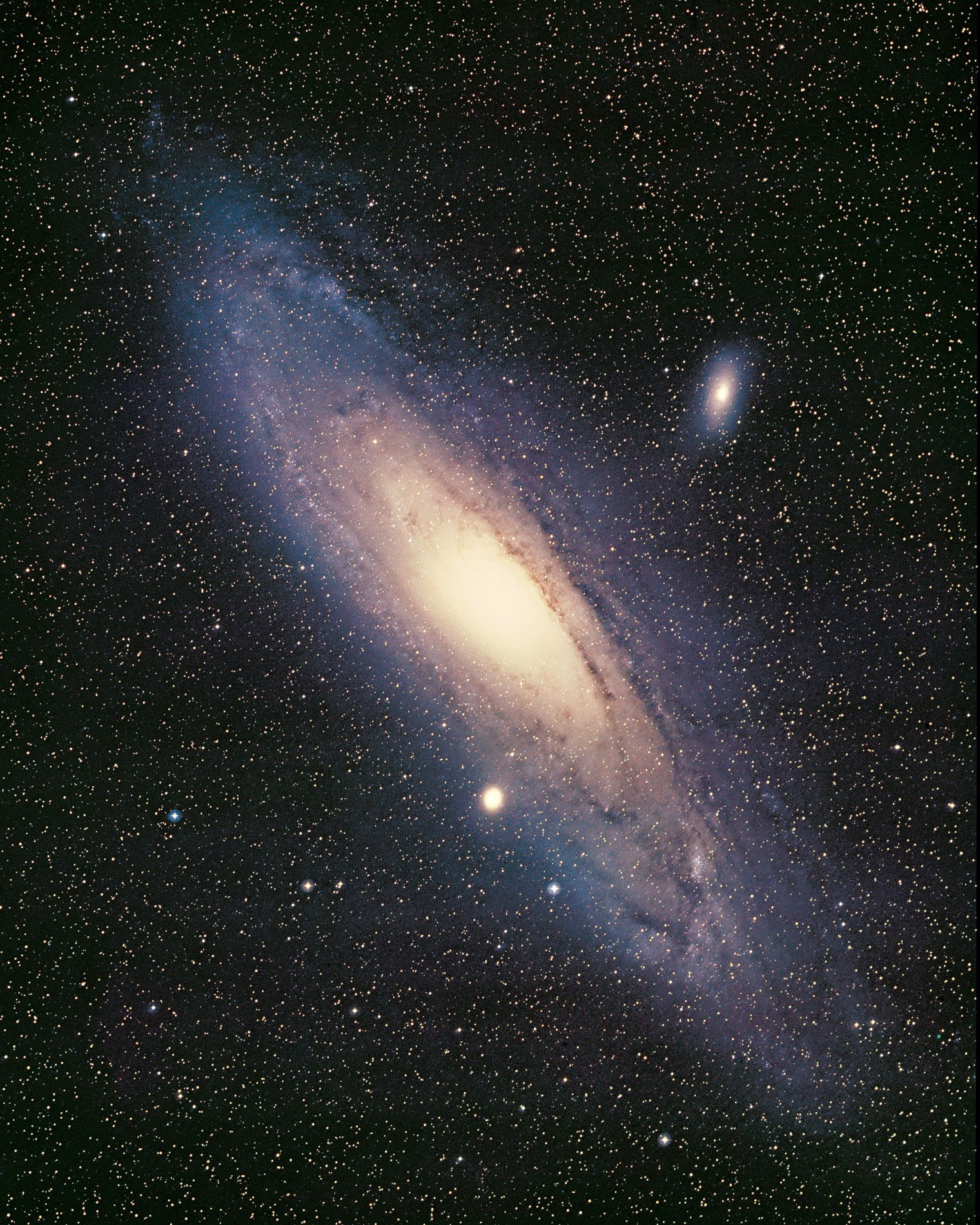 Colors Unveiled: (1959): The vast distances of even the brightest galaxies long made their colors impossible to discern. Through telescopes they appeared a pale green or a bleached white. In the 1950s, photographic engineer William Miller, working at the Mt. Wilson and Palomar Observatories in California, rectified that. Over the course of several years, he experimented with the chemical sensitivity of various types of color film and the wavelengths of visible light coming through telescopes, and eventually produced this spectacular image of the Andromeda Galaxy, 2.5 million light years from Earth. 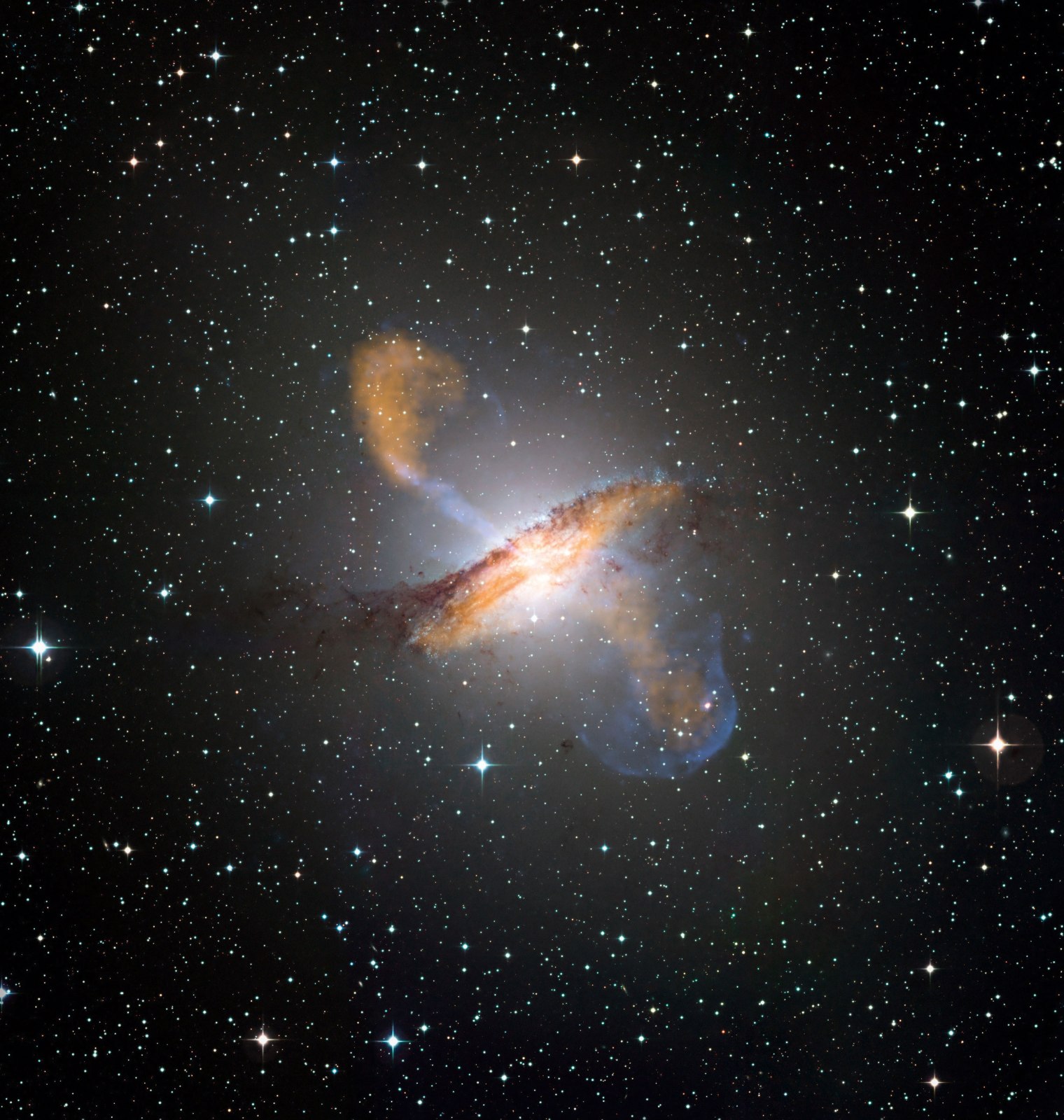 Slow-Motion Merger (2009): A collision between two galaxies is a surprisingly peaceable business. The vast spaces among the stars ensure that the two formations flow together, with few if any stars making contact with any others. In 2009, a combination of optical and radio telescope observations produced this image of a spiral galaxy and an elliptical galaxy gradually becoming one, 13 million light years from Earth. Unseen, in the middle of it all, is a supermassive black hole with as much mass as 55 million suns. 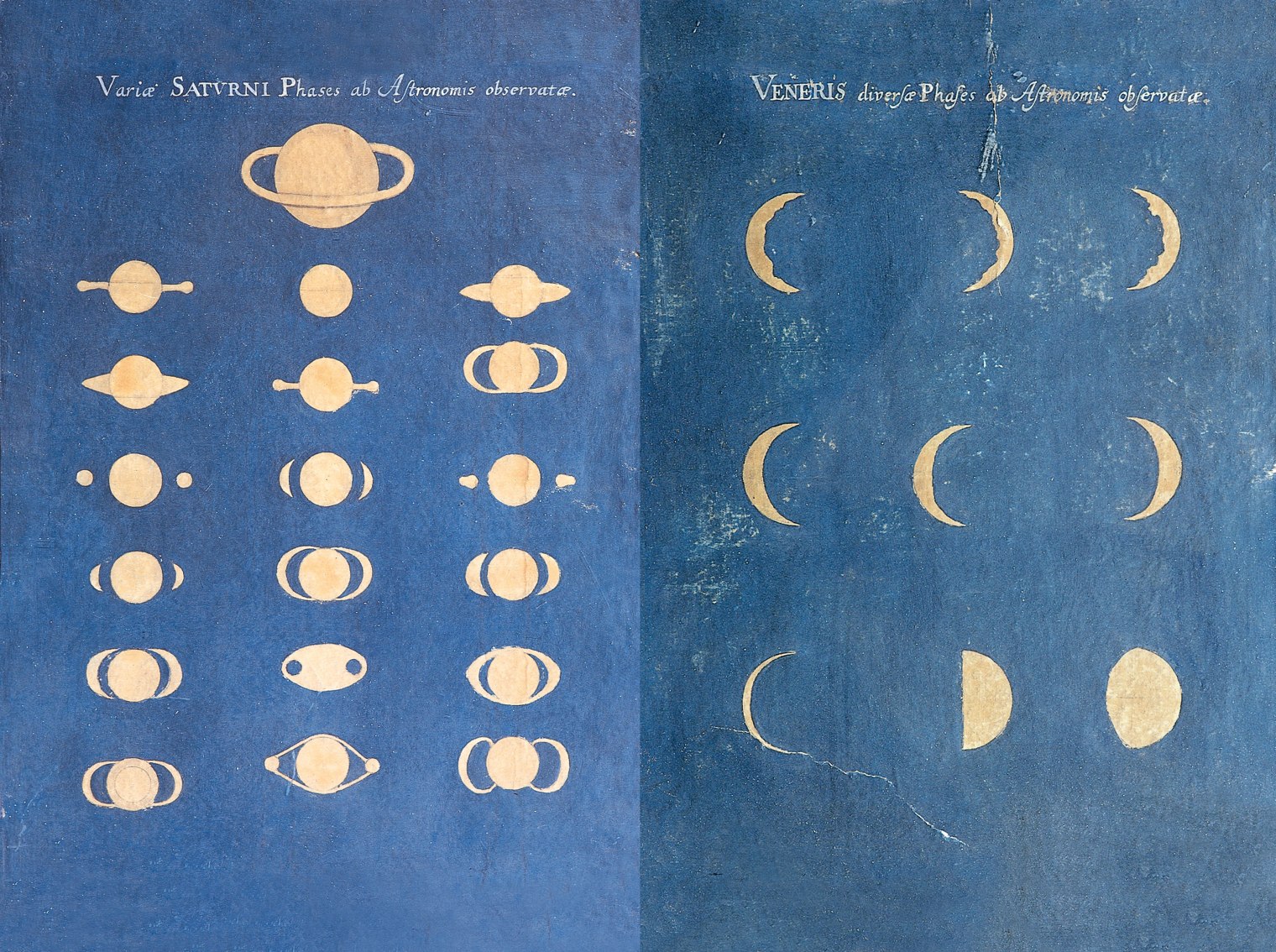 Worlds as Art (Late 17th Century): In the late 17th century, when astronomy was exclusively a man’s field, Maria Clara Eimmart, a German illustrator, became a barrier-breaker. Working in her father’s observatory in an era long before photography, she drew and painted the images that only people with access to a telescope could see. Clockwise from top right: a crescent moon, the phases of Venus, the rings of Saturn (which had not yet been confirmed to be rings at all) and Jupiter and its moons. 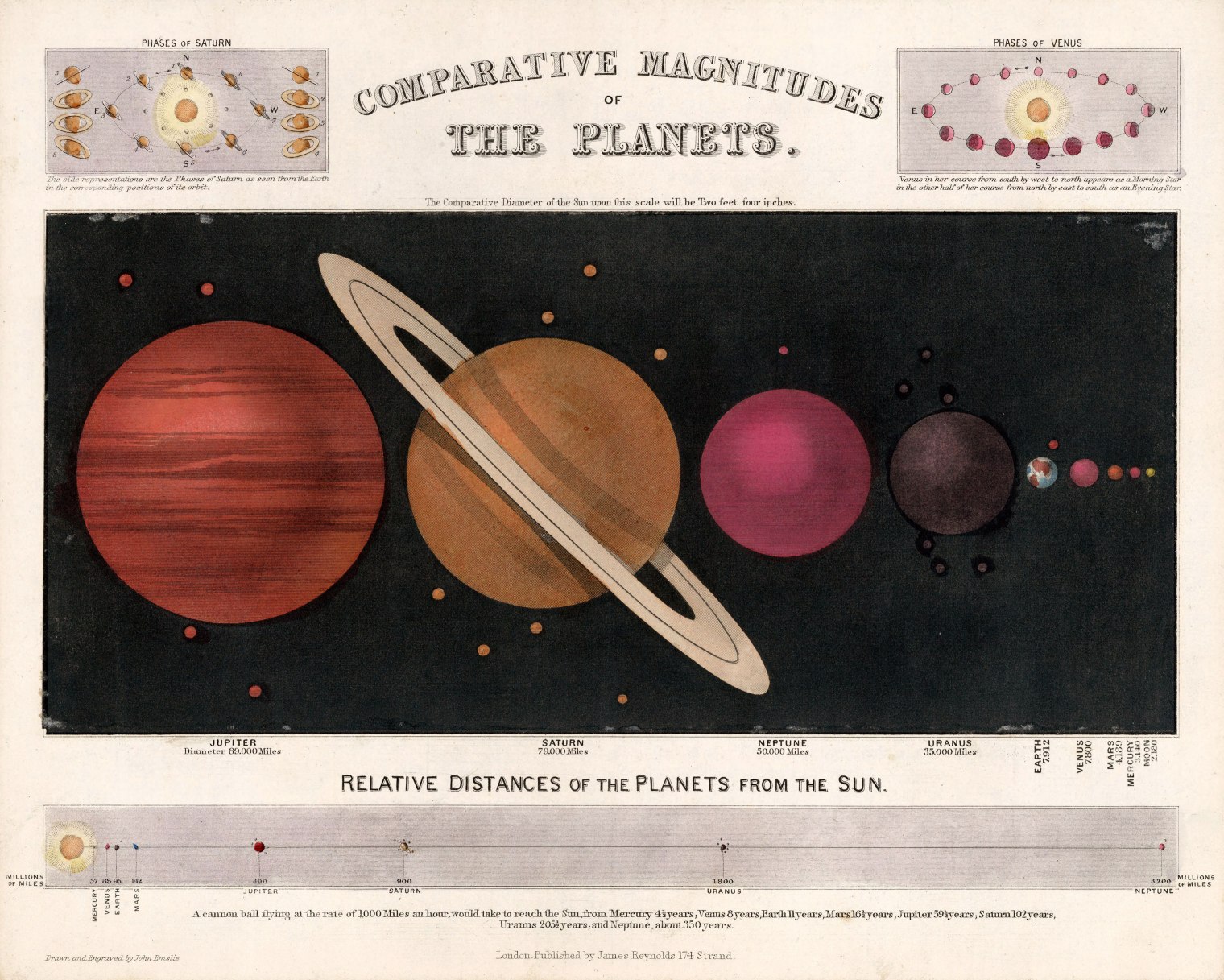 Planetary conga Line (1851): By the mid-19th century, astronomers had done an impressive job of estimating the relative sizes and locations of the known planets, as this 1851 British illustration indicates. (The one exception: Neptune, which is about 30,000 miles in diameter—or a lot smaller than the 50,000 miles indicated here.) Other elements of the illustration remain artifacts of their time, especially the planets’ relative locations, which are expressed in how long it would take a cannonball fired from the sun to reach each one. 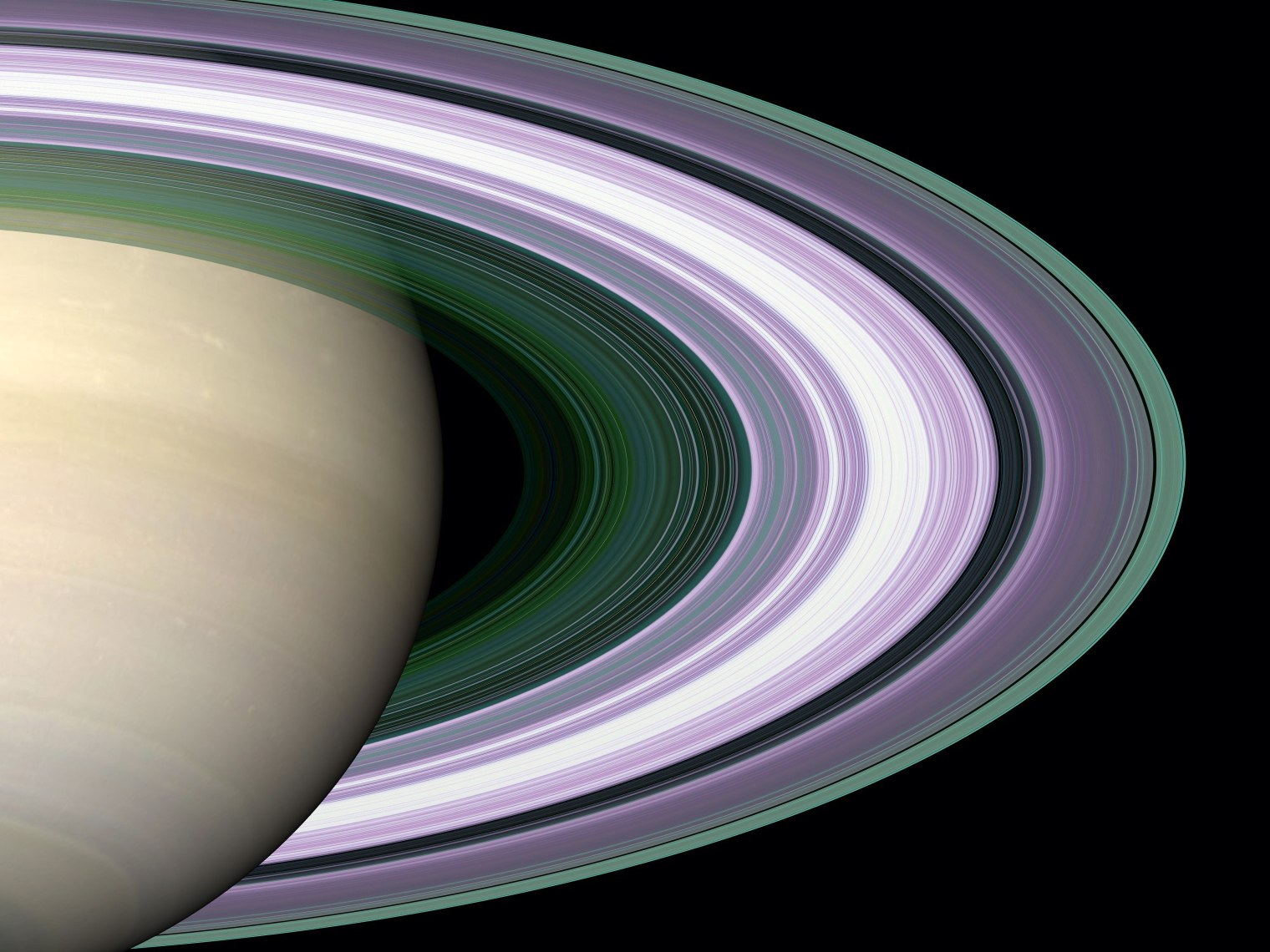 The Remarkable Rings (2005): Science’s understanding of Saturn changed forever after the Cassini spacecraft—which ended its long mission in September 2017—began orbiting through the Saturnian system in 2004. This image of the planet’s rings is color-coded to indicate the average size of the particles that make up each band. Green, for example, indicates dust and ice particles less than a third of an inch across. Purple indicates 2-inch particles. The ring system as a whole reaches 175,000 miles into space, or about 75% of the distance between the Earth and the Moon. 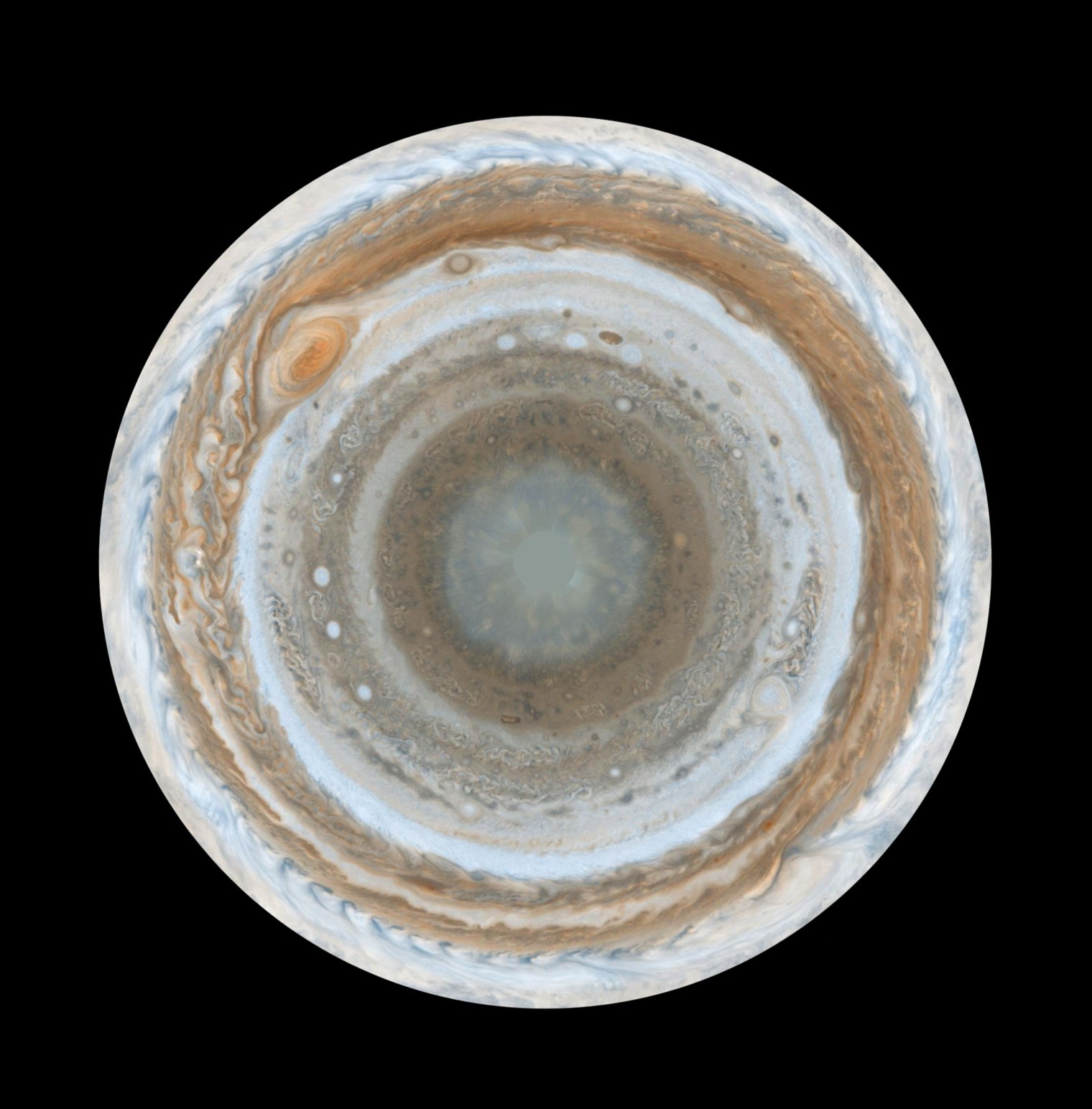 Southern Pass (2000): En route to Saturn, Cassini flew by the south pole of Jupiter, picking up a velocity boost from the planet’s gravity field. Jupiter’s great red spot is visible at the 10 o’clock position; a freckling of white ovals—most distinct at eight and nine o’clock—likely indicate deep atmospheric storms. As with all planetary flybys, the gravity boost Cassini got did not come free. Jupiter sped the spacecraft up by thousands of miles per hour and Cassini, in turn, slowed Jupiter’s orbit down by a vanishingly tiny amount. Physics is fastidious about balancing its books. 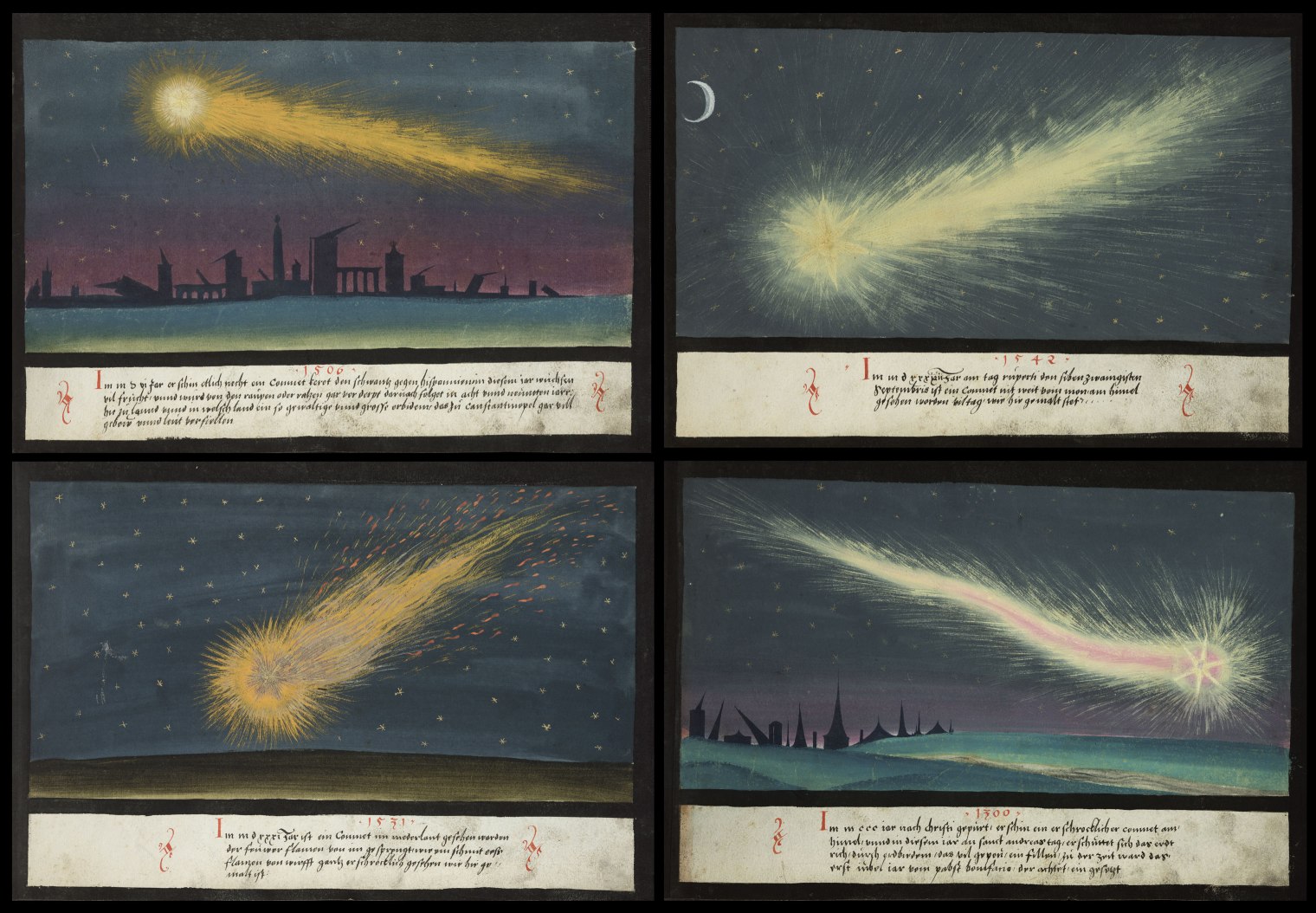 Dark Miracles (c.1550): Comets are portents of terrible things—or so it was explained in the 1550 German publication The Augsburg Book of Miracles. Each illustration depicts an actual historical appearance of a comet, and each—warns the Augsburg text—was associated with calamity: snow in summer, plagues of locust. The beauty of the illustrations betrays an acknowledgment of the beauty of the comets themselves—even if the wages of beholding it were caused by death.

Dirty Snowball (2016): Science, alas, is not always pretty—and never was this more evident than when the Rosetta spacecraft sent its Philae lander down to the surface of Comet 67P in 2016. The comet—a thing of light and loveliness from a distance—is an icy, tarry boulder up close. The brilliant corona and tail that give comets their appeal are a result of water and other volatiles streaming off the surface in the presence of sunlight. But the farther from the sun a comet moves, the more it becomes just one more rock. Philae, which landed in a shadow and quickly lost power as its solar cells failed, rides aboard 67P still.