By Talia Avakian and Kim Bubello

Numerous wildfires continue to burn throughout California, destroying hundreds of structures and causing thousands to evacuate.

Strong Santa Ana winds are pushing the wildfires at a rapid rate as hundreds of firefighters and officials are working to try and alleviate the growing flames.

The first of the fires, the Thomas Fire, started in Southern California’s Ventura County at around 6:30 p.m. on Monday Dec. 4 and has already spread across 45,000 acres since it first broke out, according to the latest estimates from the Ventura County Fire Department.

Some 27,000 people have already evacuated their homes, while at least 150 structures have been destroyed. Due to a combination of high winds traveling at speeds of 30 to 35 mph and dry conditions, the fire continues to spread rapidly, with 1,100 firefighters now on the scene. 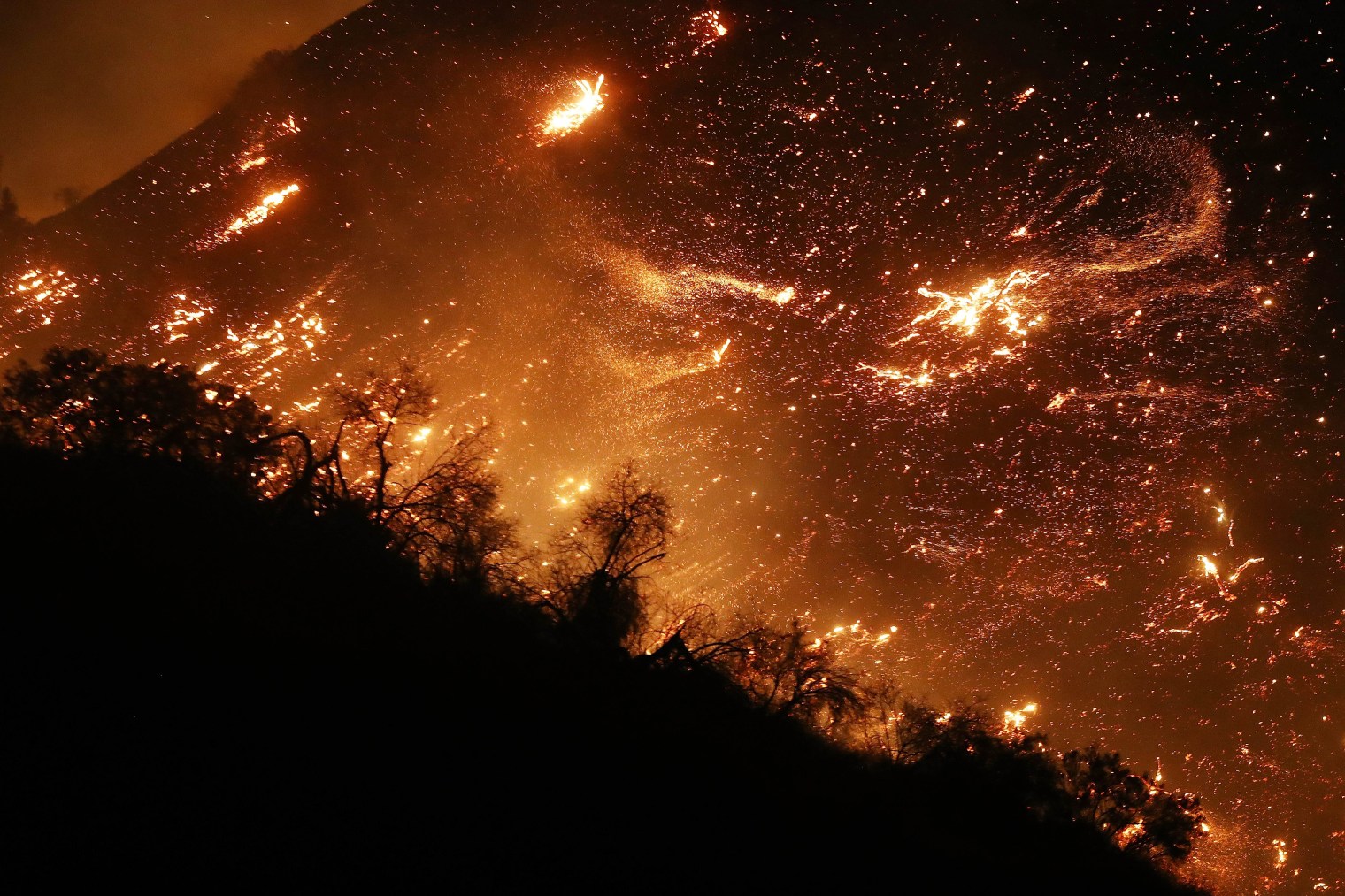 The Creek Fire burns on a hillside in the Shadow Hills neighborhood in Los Angeles, on Dec. 5, 2017. Mario Tama—Getty Images 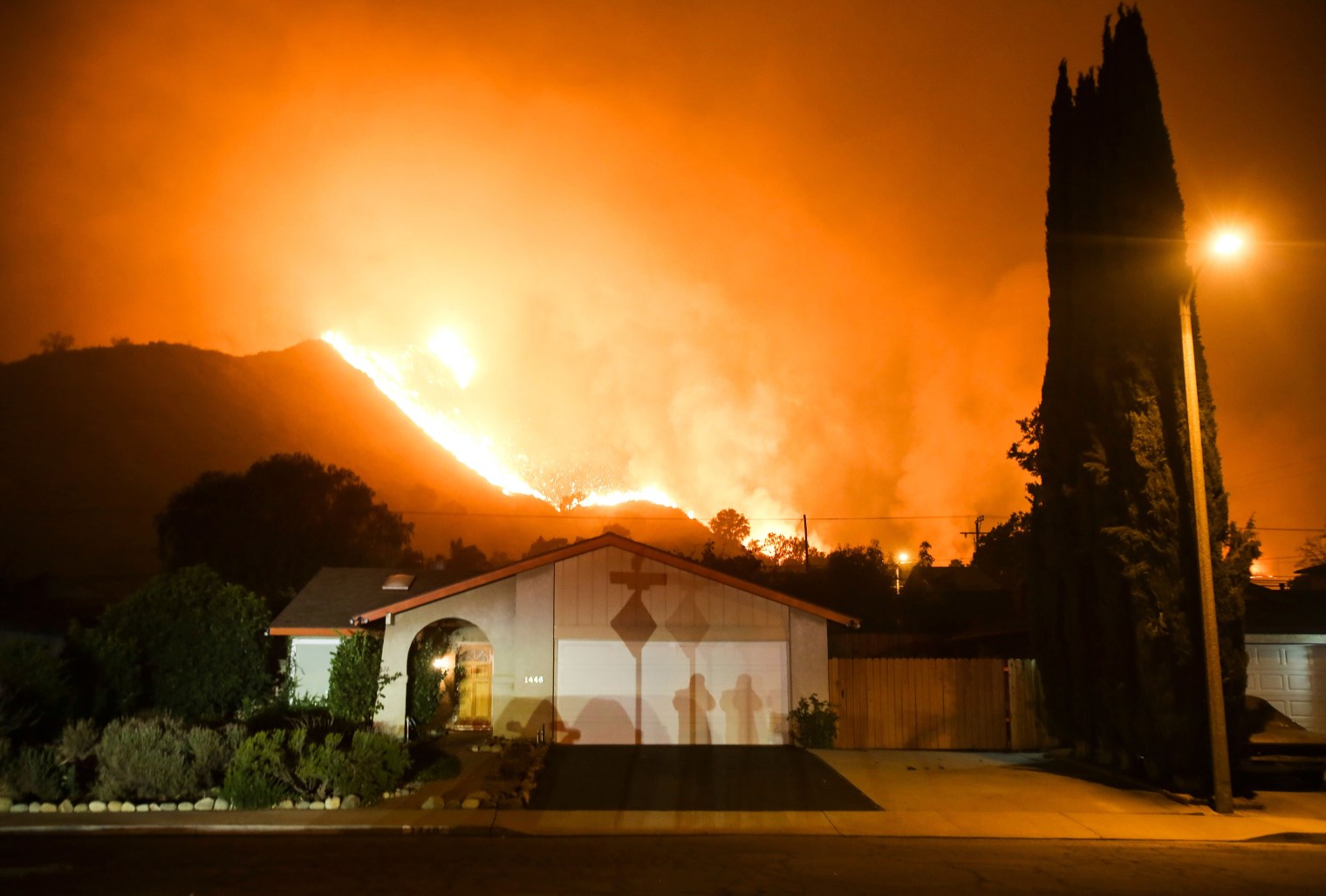 A wildfire burns along a hillside near homes in Santa Paula on Dec. 5. Ringo Chiu—AFP/Getty Images 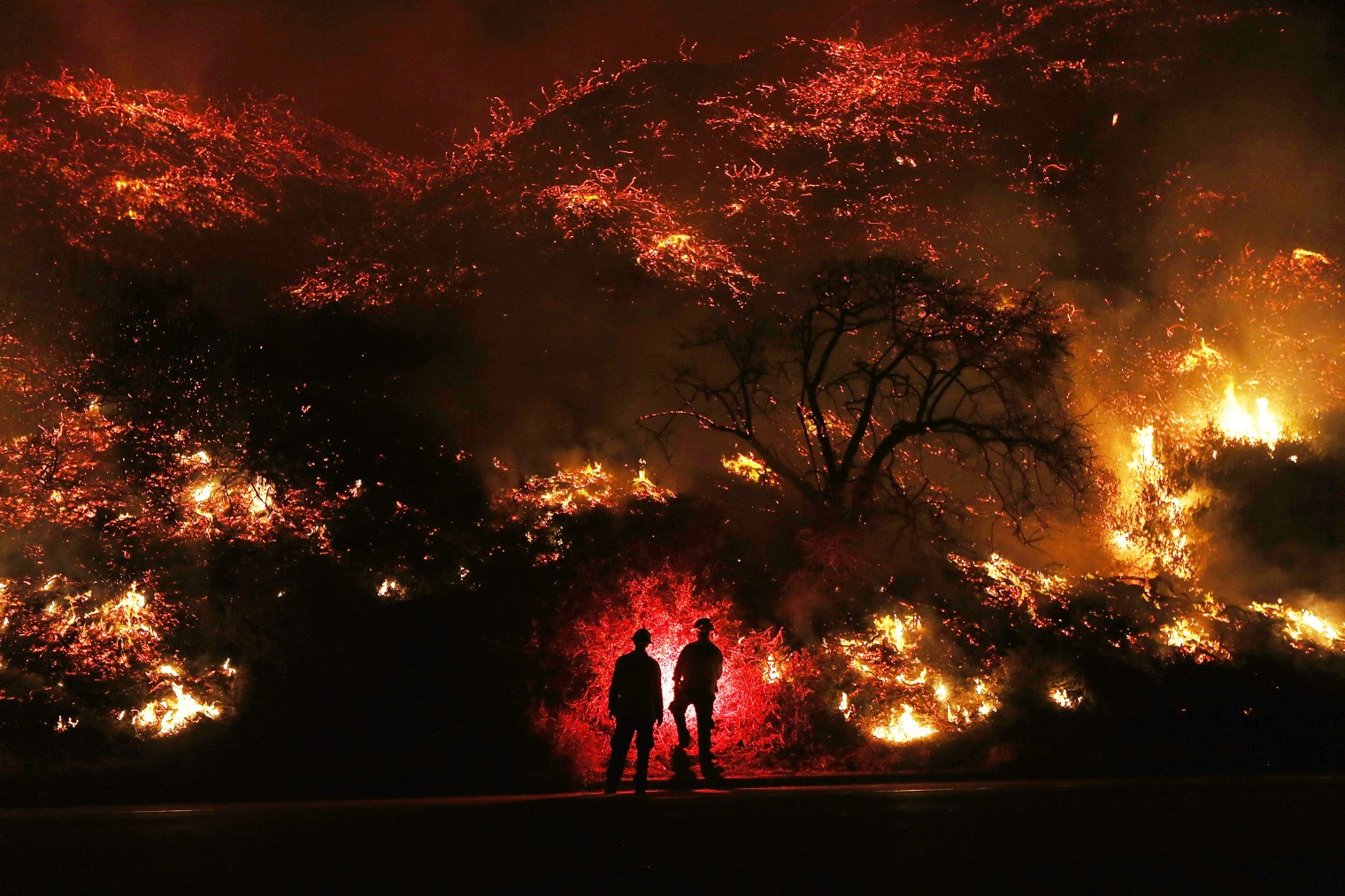 Firefighters monitor a section of the Thomas Fire along the 101 freeway north of Ventura, Calif. on Dec. 7, 2017. Mario Tama—Getty Images 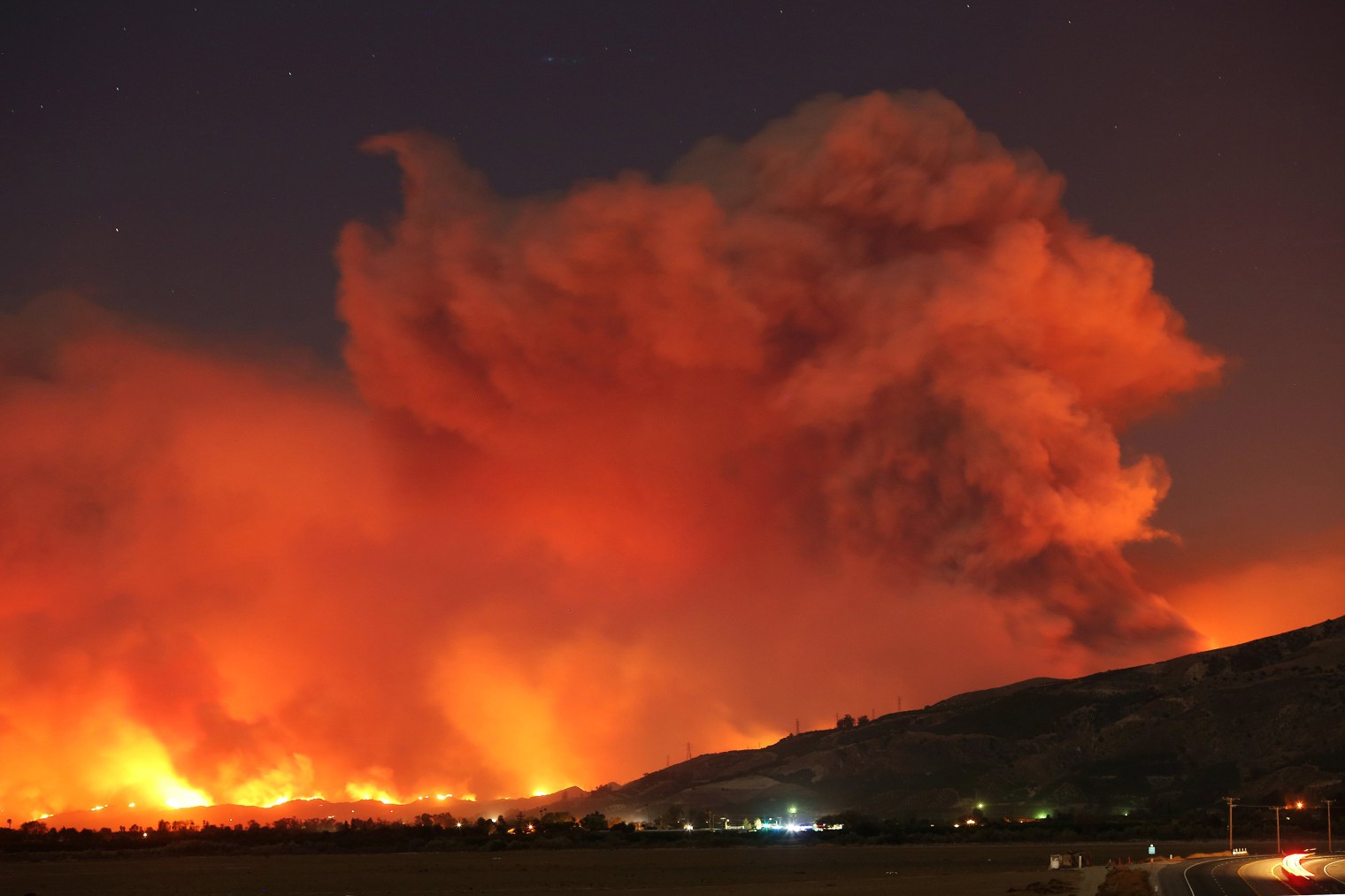 Smoke rises as strong winds push the Thomas Fire across thousands of acres near Santa Paula on Dec. 4. David Mcnew—Reuters

While firefighters had planned to use both helicopters and fixed winged aircrafts to battle the fire due to visibility issues on the ground, the intensity of the winds forced the department to ground all of the fixed winged aircrafts on Tuesday, Rich Macklin, public information officer with the Ventura County Fire Department, told TIME.

According to Macklin, officials expect the Thomas fire to continue moving towards the Oak View and Ojai areas this evening, which is why they’re putting structure protection groups in place to deal with the forefront that they expect to move into the area. 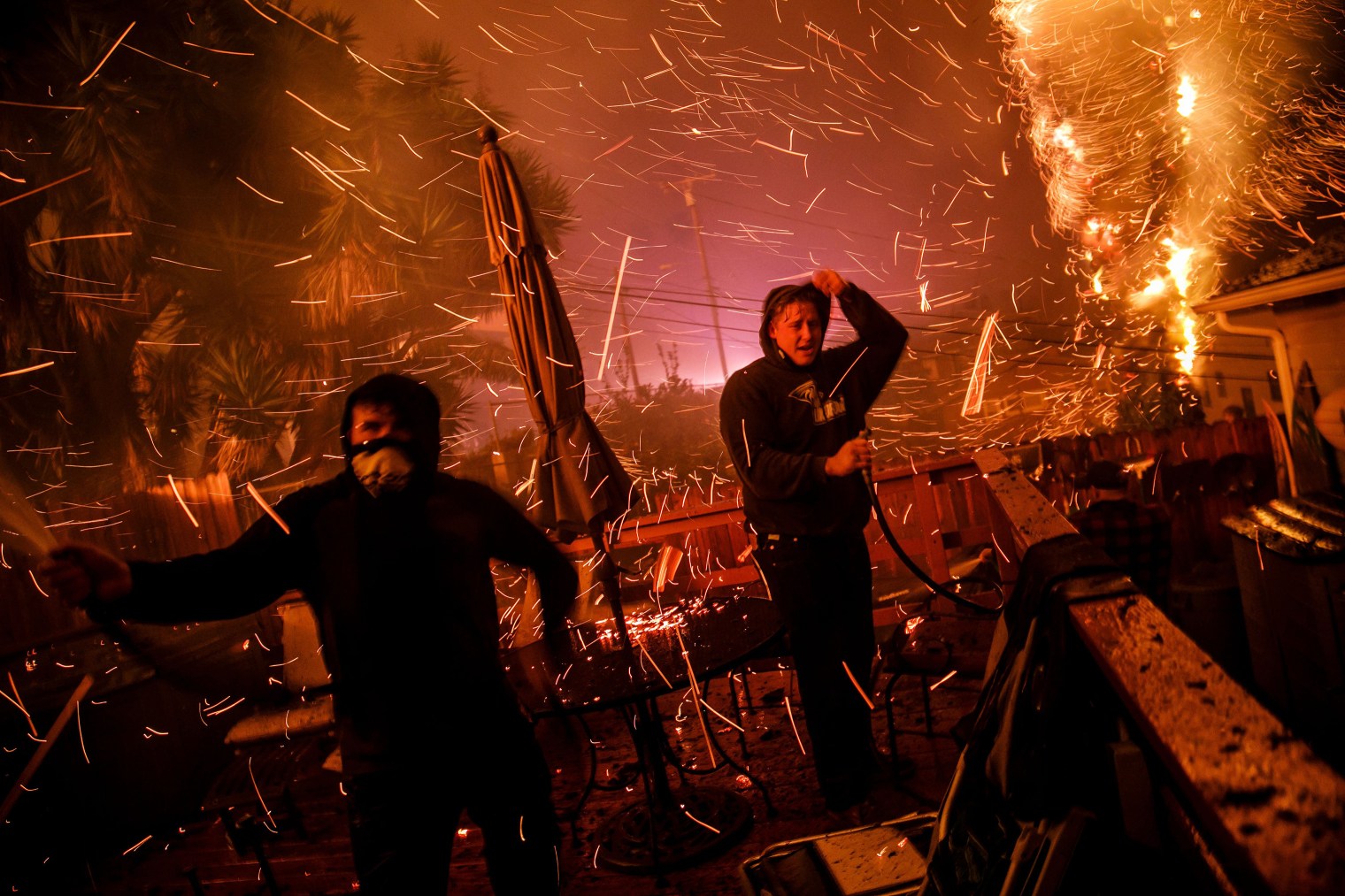 John Bain and Brandon Baker take cover from the embers as they try to stop a fire from burning a Ventura home on Dec. 5. Marcus Yam—Los Angeles Times/Polaris

“Our concern is the wind, and if we have fierce winds like last night, this is going to be another tragedy,” Rich Macklin, public information officer with the Ventura County Fire Department, told TIME.

According to the advisory, heavy smoke is pluming into the cities of Santa Paula, Ventura, and Ojai, with the offshore winds that are expected to continue for the next two days contributing to the smoke moving closer into inland areas.

For this reason, the organization is recommending that anyone with respiratory or heart disease, as well as elderly and children remain inside. They also recommend running your air conditioning if you have one, and keeping the fresh air intake closed as the air quality is considered unhealthy in the areas directly impacted by the smoke. 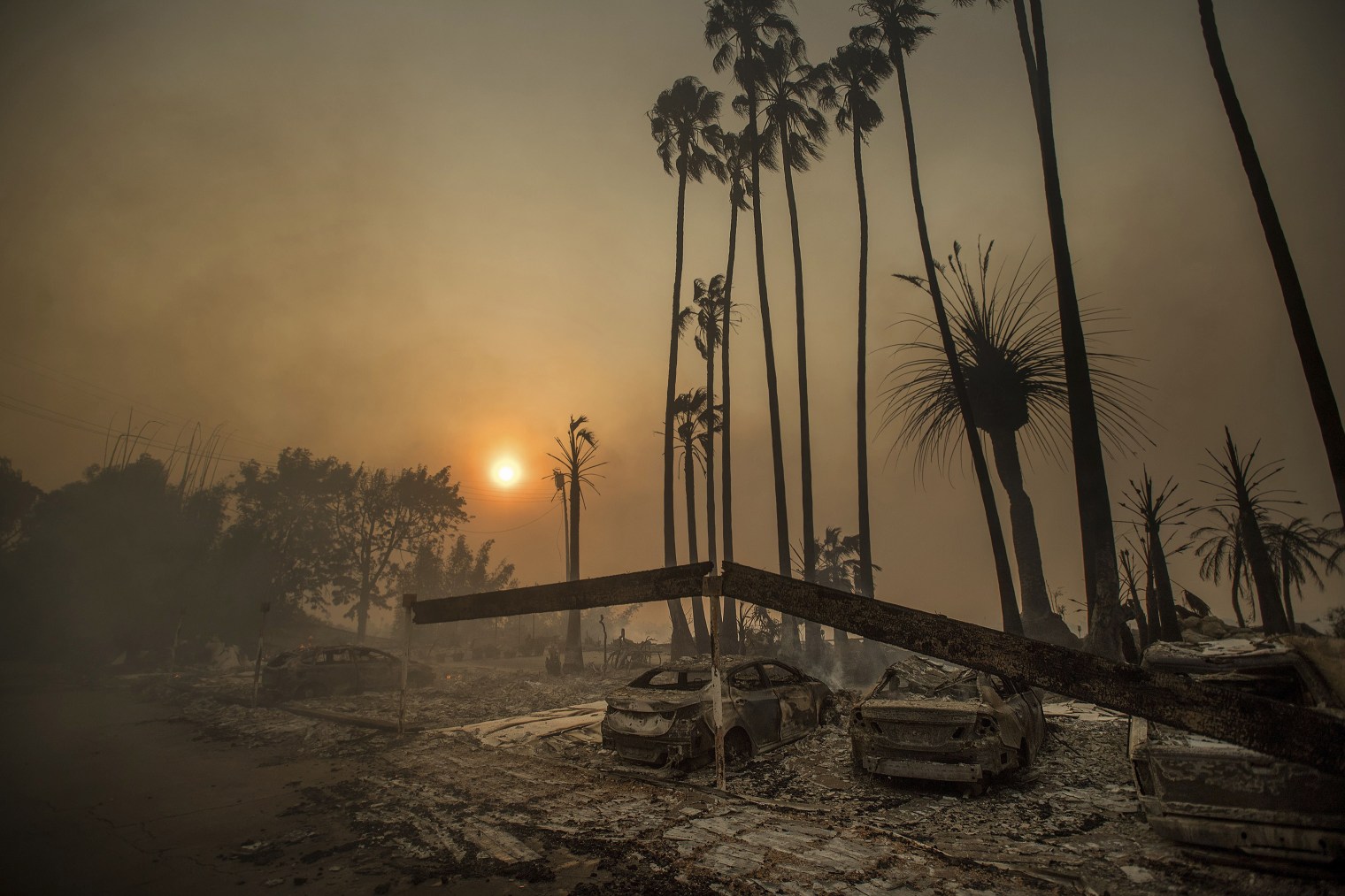 Smoke rises behind a leveled apartment complex in Ventura on Dec. 5. Noah Berger—AP/Shutterstock

Meanwhile, two other wildfires are simultaneously spreading throughout California, with dry conditions and high winds also contributing to their growth.

The Creek Fire has already burned through some 11,000 acres across Sylmar, Lake View Terrace, and Shadow Hills in the Los Angeles County since it started at 3:43 a.m. on Tuesday, with winds that are traveling at speeds of 70 mph helping to accelerate its growth, according to the latest update from the Los Angeles County Fire Department. 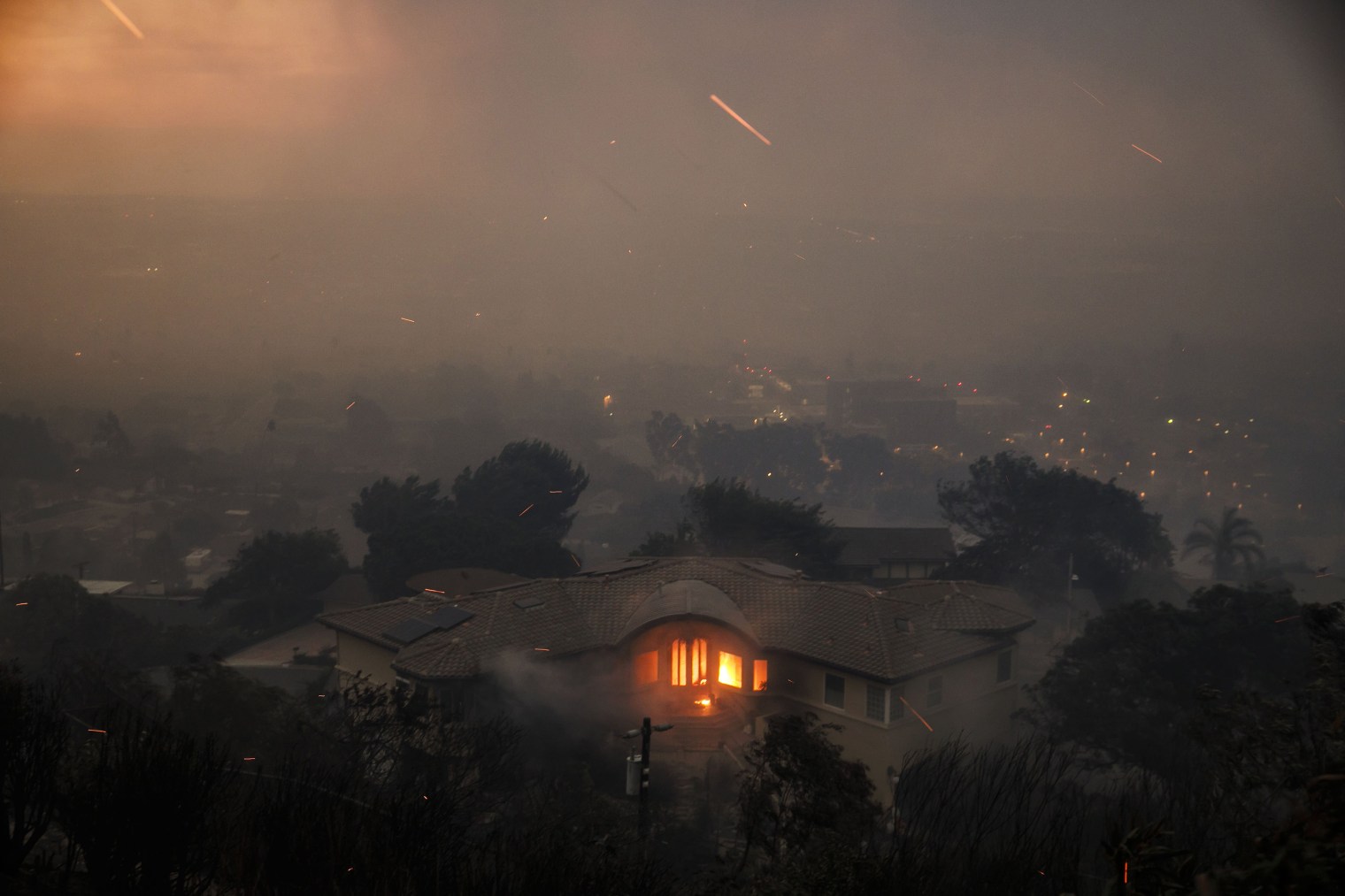 Over 300 firefighters are currently putting structure protections in place as they attempt to battle the ongoing fire, with residents north of the 210 freeway from La Crescenta to Glenoaks Blvd. currently facing mandatory evacuations.

As of Tuesday morning, there were no reports of any fatalities or injuries, though roughly 2,500 homes were evacuated, according to the New York Times.

A third brush fire, the Rye Fire, is also spreading throughout Santa Clarita, starting at 9:33 a.m. on Tuesday.

The fire has currently burned through 1,000 acres of the area, with a total of 240 firefighters on the scene, according to the latest updates from the Los Angeles County Fire Department, though no fatalities or injuries have been reported as of Tuesday morning.

Police and Fire crews watch as the Thomas Fire burns a hillside in Ojai, Calif., on Dec. 7, 2017. Kyle Grillot—AFP/Getty Images 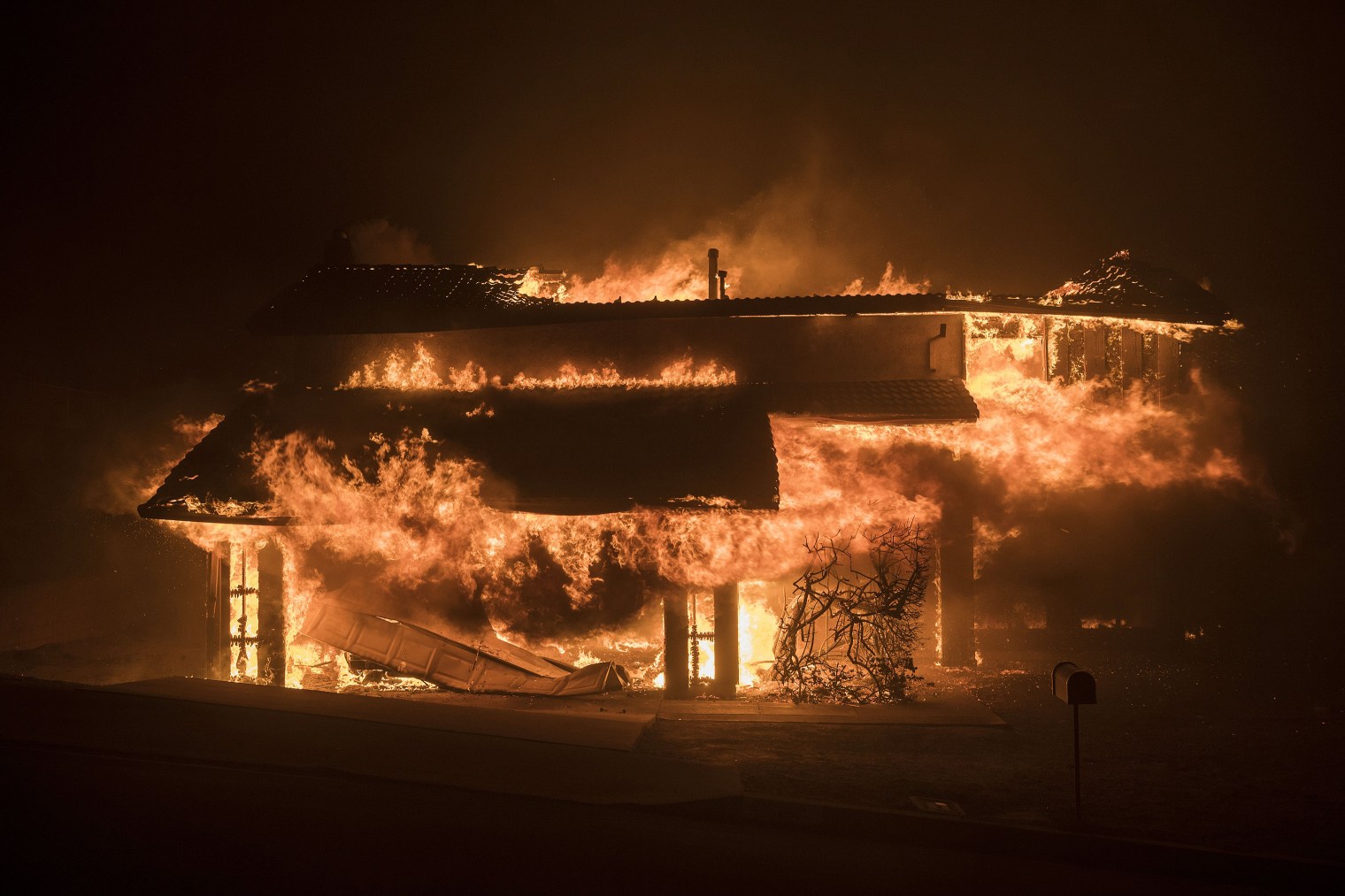 A home burns during the Thomas Fire which began overnight in Ventura, Calif., on Dec. 5, 2017. John Cetrino—EPA-EFE/REX/Shutterstock 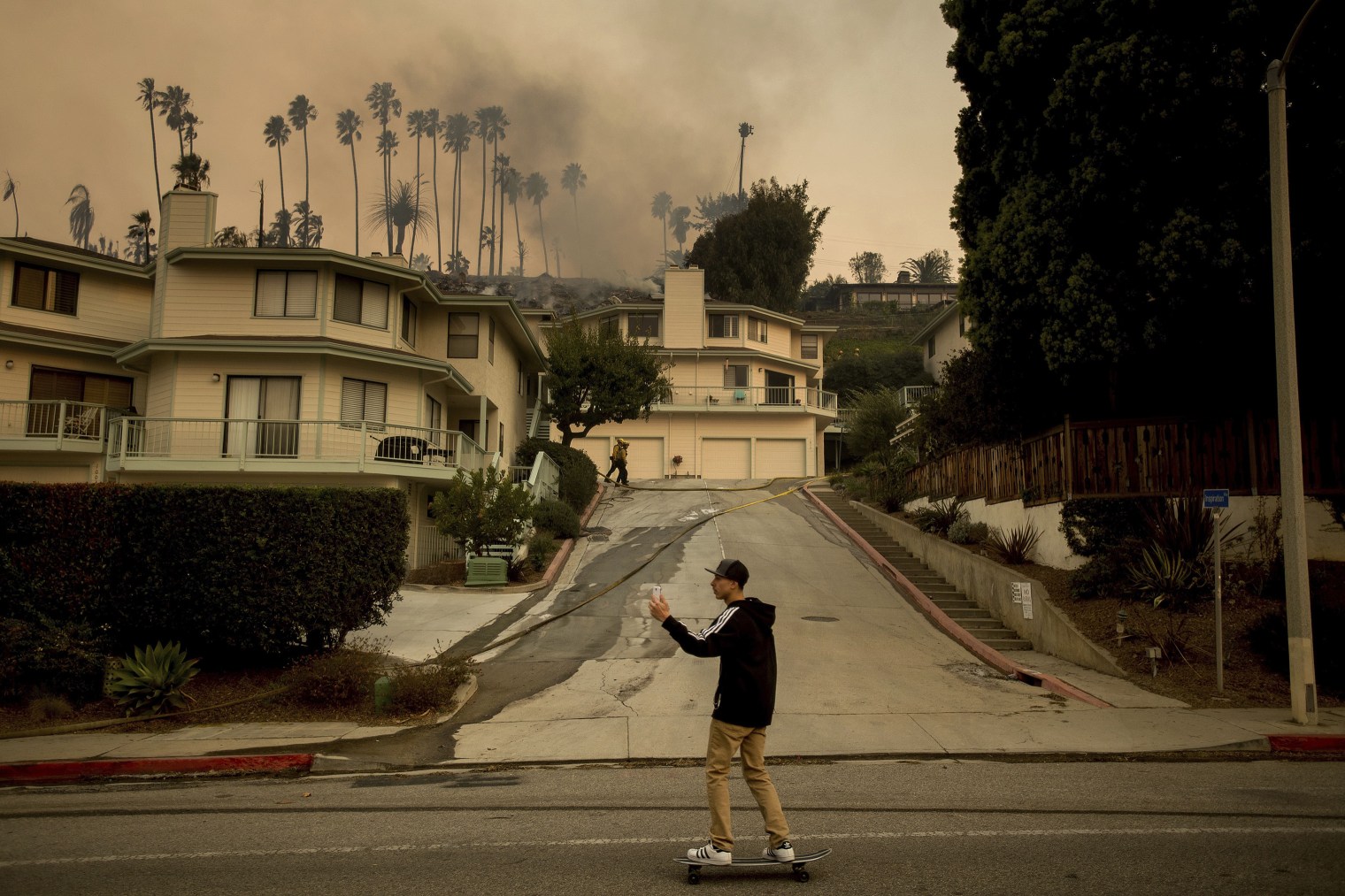 A skateboarder passes a smoldering home as a wildfire burns in Ventura, Calif., Dec. 5, 2017. Noah Berger—AP/Shutterstock

The state has been experiencing a drastic year in terms of wildfires, with various wildfires earlier this year killing over 40 people and destroying thousands of structures across California’s wine country.

As firefighters and officials continue to battle the growing fires, funds are already being created to help donate to those affected by the Thomas Fire. Those interested in donating can do so either through three different shelters Red Cross will be operating across the county, or by texting UWVC to 41444, with 100 percent of the donations going to those directly affected.

Kim Bubello, who edited this photo essay, is a Multimedia Editor at TIME. Follow her on Instagram @kimbubello.