The Spectacle in Sin City 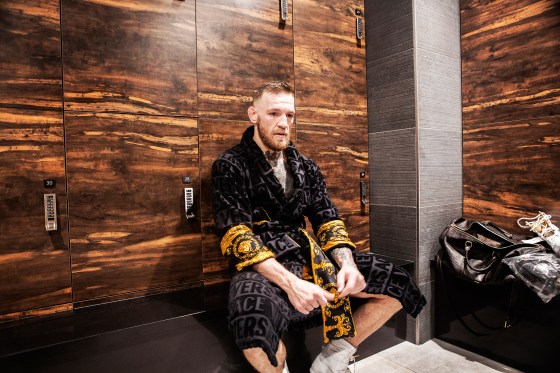 By Sean Gregory | Photographs by Christaan Felber for TIME

Las Vegas is America’s capital city of absurdity, where gambling palaces rise from the desert, illusionists escape from straitjackets and anyone can get rich quick. Which makes it a fitting site for the most craven carnival of the nation’s sporting summer, the fight between American boxer Floyd Mayweather and Irish mixed martial arts (MMA) star Conor McGregor.

On Aug. 26, Mayweather, the recently unretired welterweight champion and one of the top pound-for-pound fighters of all time, will square off against McGregor, the biggest name in the ascendant UFC. What’s at stake? Well, that’s the rub.

Mayweather trains in Las Vegas on Aug. 10 for the fight with McGregor.

Unlike most big-time pugilism spectacles, this fight is not a title bout. In fact, it will be McGregor’s first professional boxing match. (MMA allows kicking and wrestling in addition to punching.) The smart money is on Mayweather. And no matter the outcome, each man will reportedly take home more than $100 million for a night’s work.

The pairing is a sign of how far the sweet science has fallen in American culture. Mayweather, 40, hasn’t fought in almost two years, yet he remains the sport’s biggest U.S. draw. The brasher UFC has happily taken boxing’s place in the firmament; the number of annual events it stages has doubled this decade. When the UFC made its long-awaited debut in New York City last November, tens of thousands of Irish-flag-waving fans filled Madison Square Garden to watch McGregor win the lightweight crown.

McGregor, prepping for his fight against Mayweather, receives a post-workout massage on Aug. 11.

McGregor takes a break with his infant son.

McGregor on a nighttime shopping outing at a mall in Las Vegas.

Consider this showdown boxing’s desperate bid for eyes and wallets—both of which it seems to be winning. The fight is poised to break a pay-per-view record (it costs $95.95 to watch in HD), and the casinos are taking in millions in bets.

In the absence of consequence, venom has filled the vacuum. The fight was announced in mid-June—the Super Bowl matchup, by comparison, is set two weeks before kickoff—and the time since has been a parade of odious self-promotion. Among the lowlights of the three-country press tour: homophobic slurs (Mayweather, though he apologized), racist taunts (McGregor, though he denied the ­intent), misogyny (both) and a ­custom-made suit emblazoned with F-CK YOU (McGregor, presenting himself to Mayweather). Muhammad Ali’s lyrical wit, this was not.

McGregor and Mayweather at workouts for the media in Las Vegas.

Even before this production, Mayweather had turned off many fans because of his history of violence against women. In 2010 his son, then 10, wrote in a statement to police that “my dad was hitting my mom.” Mayweather was sentenced to 90 days in jail after he pleaded guilty to a reduced battery domestic violence charge and no contest to two harassment charges.

McGregor, 29, has the backstory to play the hero. Raised in a blue collar Dublin suburb, he resisted the tempta­tion to join a gang or deal drugs. Days before his first UFC fight, in 2013, he collected a $235 welfare check; he needed it after giving up a job as a plumber’s apprentice. He skyrocketed to the top of the UFC, earning millions of dollars and global adoration along the way. Yet McGregor can’t resist the low road; in July he wore the jersey of an NBA player who was allegedly involved with Mayweather’s ex.

Despite the unsavory buildup, the bout is likely to be the biggest fight on U.S. soil since Mayweather vanquished Manny Pacquiao in 2015. As the two fighters have settled into their desert training camps, the crowds have thronged along with the publicity machine. “We figured out a way to take this to another level,” said Mayweather Promotions CEO Leonard Ellerbe. “It’s called entertainment … People are intrigued about the Kardashians!”

No fight could live up to these expectations. But many will be watching, just in case.