The Islamic State Is Gone. But Raqqa Lies in Pieces 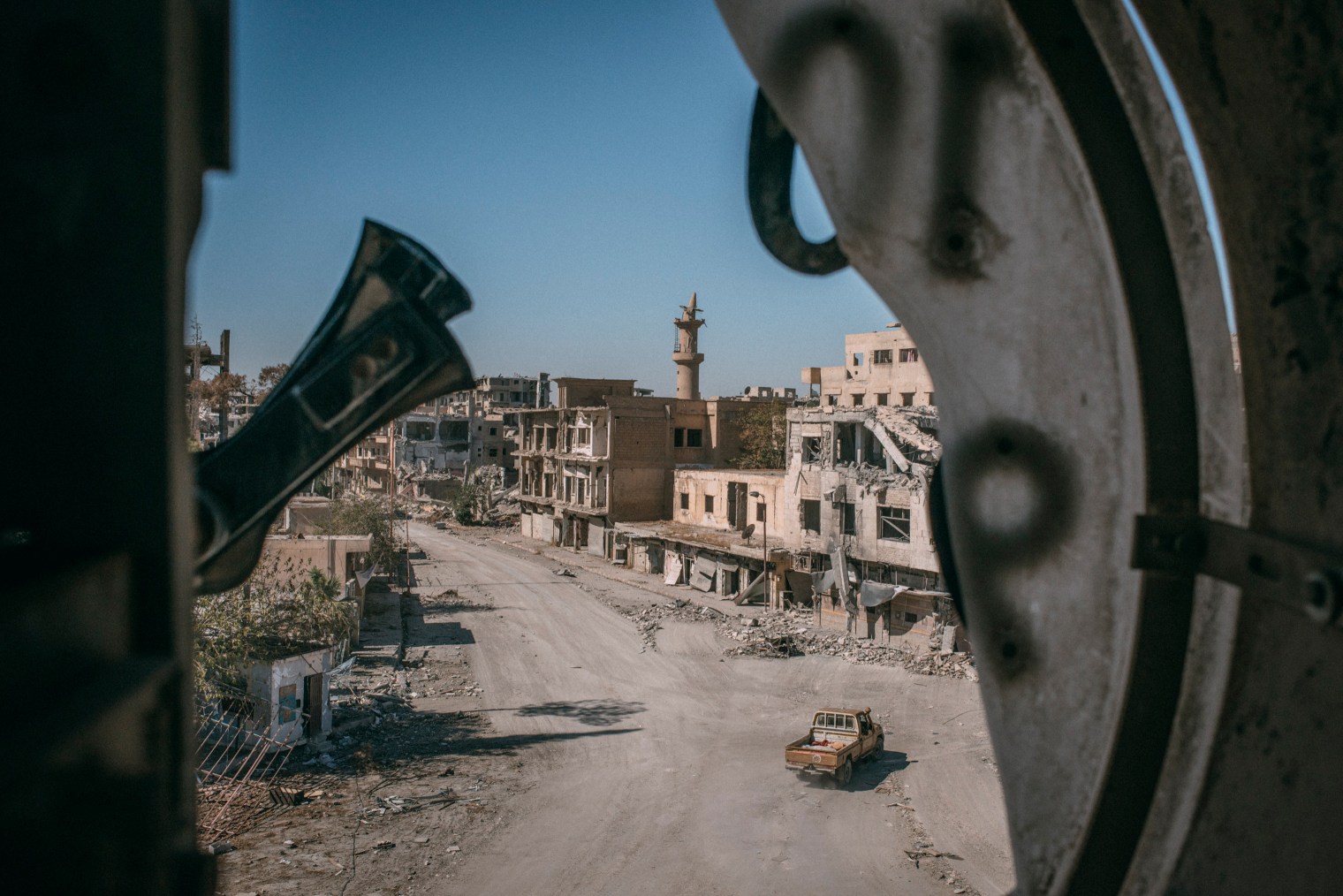 A view of the clock tower square, where Islamic State fighters would carry out executions, in central Raqqa on Oct. 18.

One day after U.S.-backed Syrian militias defeated the Islamic State in the country’s capital, the town is an urban husk of hollow buildings and bodies lying in rubble-strewn streets.

The militias known as the Syrian Democratic Forces declared victory in Raqqa on Tuesday, signaling the unraveling of the Islamic State’s self-proclaimed Caliphate and the ongoing collapse of its territory. More than three years after the ISIS seized a vast swath of Iraq and Syria and launched a global campaign of terror, the group is now on the brink of defeat as a conventional fighting force.

In the wake of the battle, the city is all but totally abandoned. Raqqa was once one of the largest cities in eastern Syria with more than 200,000 residents, but now no civilians are to be found. SDF fighters roam the deserted streets in pickup trucks, blaring celebratory music, cheering and flashing the victory sign. Teams of fighters circulate the neighborhoods clearing mines from houses, occasionally blasting a door open with a bang and a hail of debris. 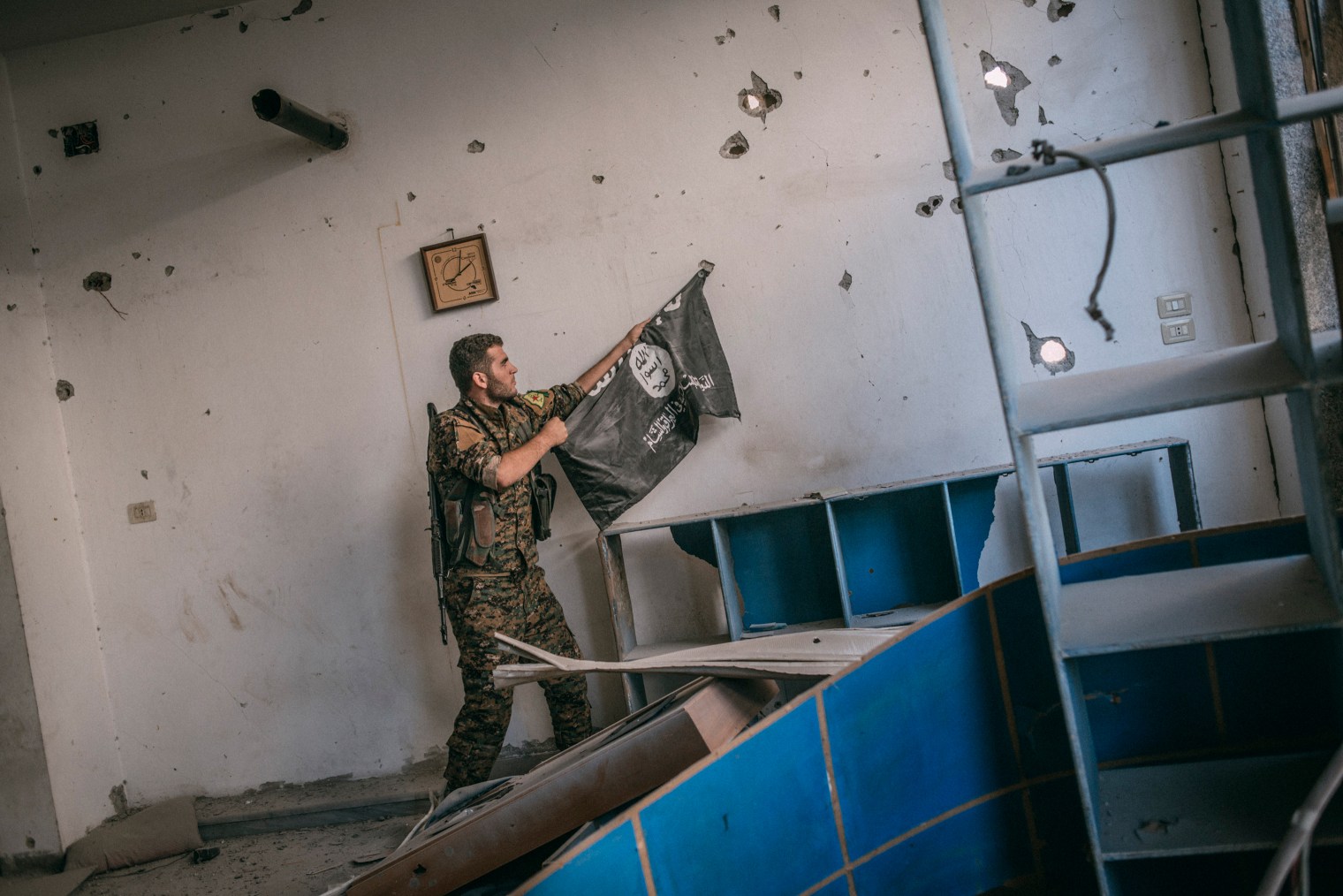 A member of the Syrian Democratic Forces removes an Islamic State flag from a wall on Oct. 18.

In the city center on Wednesday, a soldier named Mustafa Abdel Salam, 28, stands in an empty traffic circle under a clock tower. He and four other militiamen are waiting to load a flatbed truck with the remains of vehicles seized from ISIS. Abdel Salam is a trucker from Raqqa and he sees no way to return to his hometown. His house is destroyed. Still, he said, the capture of the city was good news. “I feel much better. I’m relieved,” he says.

Following three and a half months of fighting, ISIS’ last stand in its capital took place in in a central neighborhood of the city adjacent to a soccer stadium. Surrounded by SDF fighters and rocked by U.S. coalition airstrikes, an estimated 300 remaining fighters held off the advancing troops with volleys of sniper fire and waves of car bombs—until last week. Then, the Syrian fighters in the ISIS ranks called for a truce. Local civilians allowed them and their families to be evacuated.

In total, 275 fighters exited the besieged enclave with their families, filing into the city’s al-Naim Square boarding a convoy that took them to be detained and questioned, according to fighters who witnessed the transfer. They left behind an estimated 40 foreign fighters who fought until their guns fell silent and the SDF moved in. “We didn’t find any of them. All of their bodies are under the buildings. We can only smell them,” said a militiaman, 25, who goes by the nomme de guerre Renas Derik, standing in the square on Wednesday. 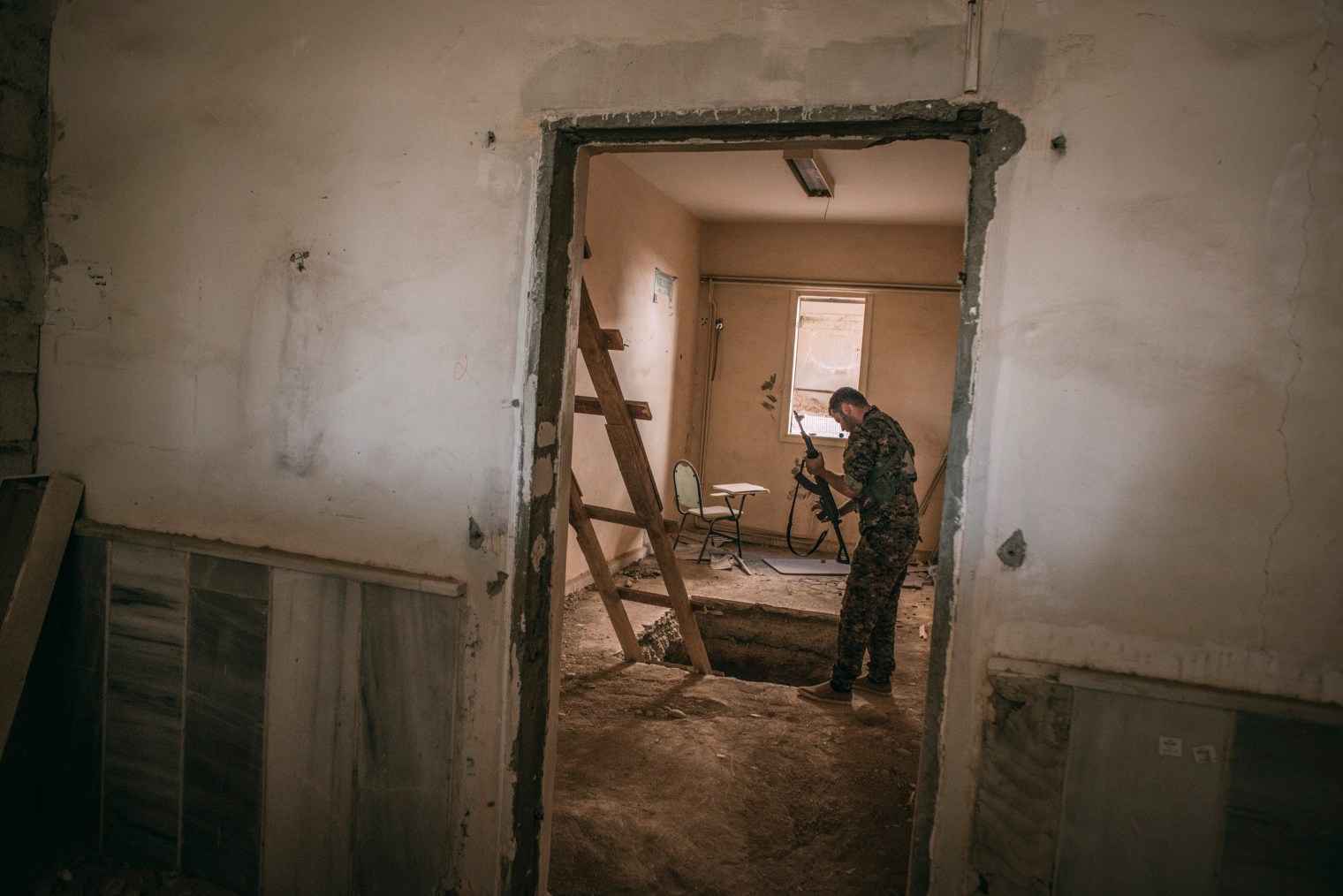 A member of the Syrian Democratic Forces inspects an Islamic State tunnel inside a college in Raqqa on Oct. 18.

The fall of Raqqa concludes a year of fighting for two key cities claimed by ISIS following its stunning conquest of territory in 2014. In neighboring Iraq in June, Iraqi forces recaptured Mosul, a city of more than a million captured by the extremists in 2014. U.S. allied militias launched the assault on Raqqa in earnest in early June, around the time the battle for Mosul was concluding.

Together, Mosul and Raqqa were the twin symbols of ISIS’ self-declared state, its base for operations and a destination for foreign recruits from around the world.

Airstrikes by the U.S.-led military coalition devastated both cities, but in Raqqa the destruction is more complete, with nearly every building damaged or destroyed—in Mosul, the destruction was confined to specific neighborhoods.

In Raqqa the challenge of rebuilding the city will be immense, beginning with removing the vast obstacle course of booby traps, mines, and unexploded ordinance left in the wake of the battle. “We fled ISIS. We can’t return to ISIS’ mines. We’ll return to a place that’s clear of both ISIS and mines,” says Ahmed Hassan, 33, an SDF media official originally from Raqqa who was returning to the city for the first time since fleeing months ago. 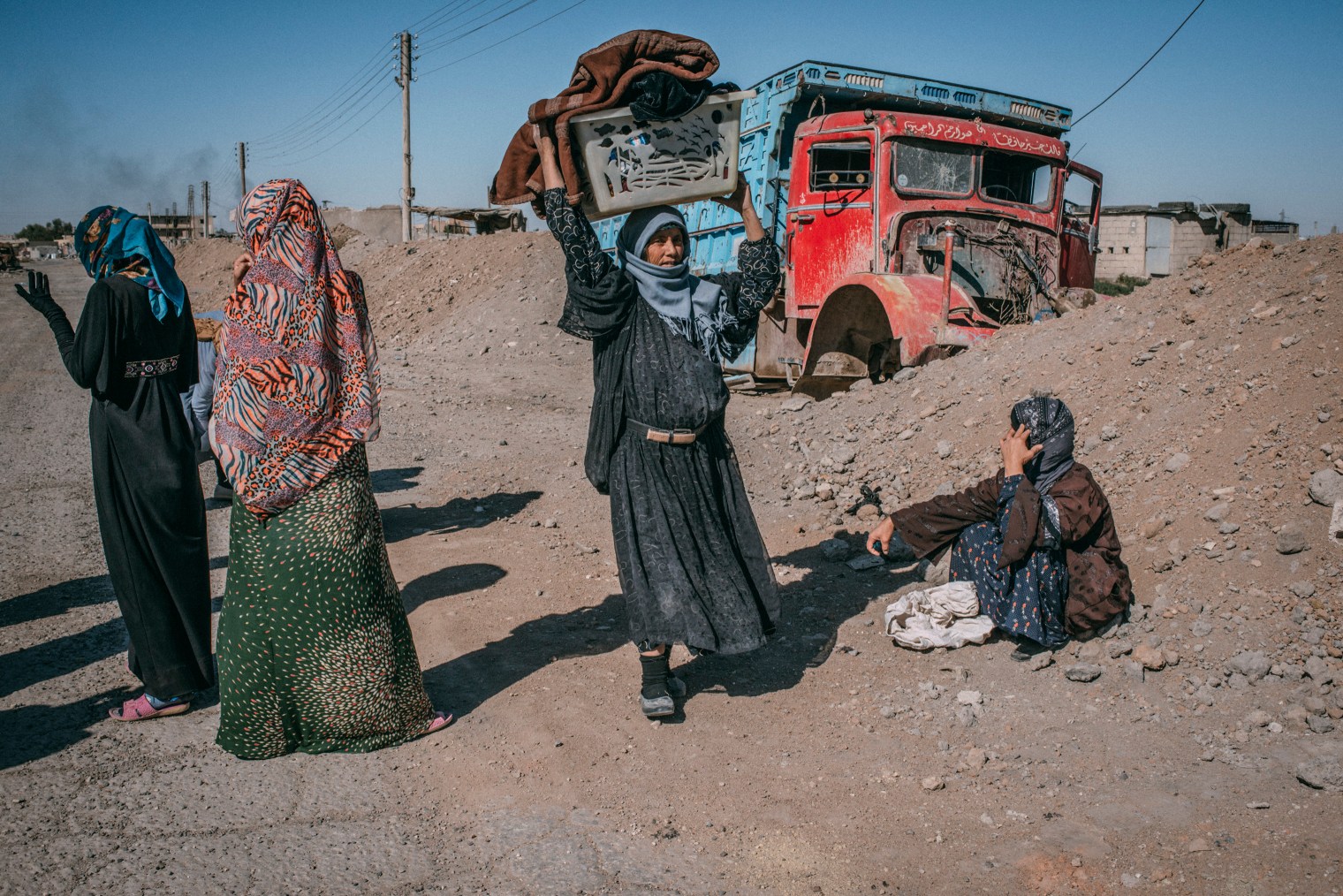 Civilians return to Raqqa to collect some of their belongings on Oct. 18.

Everywhere in Raqqa there are traces of an urban society that buckled under jihadi rule and collapsed during the ferocious battle to reclaim it. Overturned cars protrude at odd angles in the street. An ATM sits ajar, its front blasted off the hinges by explosives.

At a perfume cosmetics shop, a sign hangs in the window: “Men forbidden to enter,” the sentence underlined three times. The Islamic State’s black flag still hangs here and there: On top of an empty building, inside an abandoned shop. The SDF fighters snatch the flags down wherever they see them.