The Secret Origins of the Tea Party

The spring of 1993 was a lousy time to be associated with the Republican Party in Washington, D.C. Bill Clinton had just stormed into the White House. The Democratic Party controlled both houses of Congress. Even undersecretaries of powerful cabinet departments from the Bush administration discovered that they were unloved, unwanted, and unemployed in the nation’s capital. 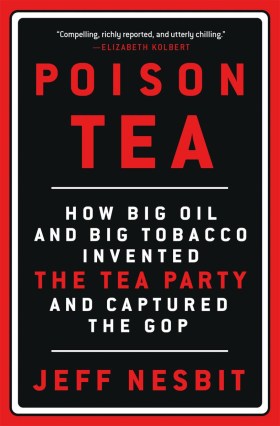 That included me. I’d worked at the White House as the director of communications for Vice President Dan Quayle, an Indiana Republican, during the second half of the elder Bush’s term as president. In 1993 D.C. had few open doors for refugees of the losing Bush White House. Defeat had been sudden and unexpected, and plenty of folks like me found themselves on the street with bleak job prospects in a place that had become a one-party town.

So I did what many others did in that spring of 1993 in the nation’s capital: I began consulting. My first client was a think tank that I’d never heard of—a small outfit with big dreams and a curious checkbook.

At the time, no one knew much about Citizens for a Sound Economy (CSE). When I’d asked about funding for CSE, it had taken a while to get a clear answer. But, eventually, it became obvious when Rich Fink showed up at critical strategy sessions and spoke with unblinking certainty about what Charles Koch was interested in and wanted done without question. Though few have heard of Rich Fink, he’s been in the inner circle of the Koch brothers’ movement-building efforts for decades, influencing the creation and actions of Koch-funded front groups.

CSE was, in effect, a wholly owned subsidiary of Koch Industries, the second-largest privately owned company in the United States, with interests in manufacturing, trade, and investments.

But what I didn’t know when I began consulting for Citizens for a Sound Economy was what any of the connections between CSE and the Koch brothers were really all about. What was the endgame? Today, we know.

Charles and David Koch—who, if their individual fortunes were combined in one place, would quite possibly represent the wealthiest person on earth—have almost certainly spent or raised more than a billion dollars to successfully bend one of the two national parties in America to their will. The long rise of the Tea Party movement was orchestrated, well funded, and deliberate. Its aim was to break Washington. And it has nearly succeeded, as America saw in the debt-ceiling debacle of 2011, prompted by the Republican Party’s demand that the president negotiate over deficit reduction in exchange for an increase in the maximum amount of money the US Treasury is allowed to borrow. There are no mistakes or accidents in the Tea Party movement. Its leadership has made certain of that.

One of my first assignments as a consultant for CSE was to join the CSE leadership on a New York fund-raising trip to meet with a huge corporate partner with vast experience in building real political muscle who could help CSE reach beyond Koch oil money for their new grassroots efforts. We visited Philip Morris’ headquarters in New York.

We were met by several of Philip Morris’s state-based government affairs experts, all of whom had significant experience in building coalitions with an eye toward blocking regulations they didn’t like at the state level. The concept that CSE put on the conference table, which was quickly taken up by the Philip Morris staff, was a bit shocking to me. They proposed an unholy alliance—Philip Morris money commingled with Koch money to create anti-tax front groups in a handful of states that would battle any tax that moved. It would make no difference what kind of tax—the front groups could battle cigarette excise taxes in the Northeast and refined-oil fees at the coasts. Any tax, for any purpose, was bad—and these front groups would tackle them all, with Philip Morris and the Kochs behind them.

It made good business sense—and good political sense as well. You could relabel just about anything as a tax, and heaven knows the American public hates taxes. This, at its core, was the beginning of the American Tea Party revolt against the power of the government to pay for its programs. They could recruit average citizens from a variety of ideological groups to their cause. They would work side by side with corporate-directed workers and employees, providing real boots on the ground when enough activists weren’t readily available. And no one would be the wiser—or even care— that these “grassroots” anti-tax groups would be jointly created and funded by the largest private oil company and the largest cigarette company in the world.

What didn’t become public until nearly 20 years later was that these themes of a Tea Party anti-tax, anti-regulation, and antigovernment revolt were then developed almost simultaneously by two of the largest tobacco companies—Philip Morris and R.J. Reynolds—under the guise of political and business coalitions to fight excise taxes of all sorts, including cigarette taxes. In successive phases in the 1990s, with the Kochs’ CSE as its core mobilization network partner, Philip Morris and RJR helped create state-based anti-tax and anti-regulation propaganda campaigns such as Get Government Off Our Back, Enough is Enough, and Citizens Against Regressive Taxation.

Over the years, Rich Fink, Charles Koch’s political adviser, and his various Koch protégés have occasionally talked publicly about what would be needed to take over one of the two national political parties from the outside and place Libertarian, free-market principles at its center. It would take:

• an extensive academic network to support it intellectually;
• policy networks in every state to draw on that intellectual underpinning from hundreds of American universities;
• a true political grassroots alliance that extended to all of those state capitals and worked closely with the academic and policy network;
• a propaganda arm that could bring tightly controlled messaging and narratives to the fore in the state networks in a way that looked
like in- dependent journalism;
• and a national coordinating group that could enforce discipline in what would otherwise be a chaotic, unruly, wildly disconnected political
network that ran the gamut from the patriot movement to American exceptionalism.

As luck—or careful, strategic planning—would have it, just such a highly leveraged network with these very pillars was in place as the Tea Party movement appeared to emerge from nowhere at the start of President Obama’s first term in office. That Tea Party movement looked an awful lot like the efforts the Kochs’ CSE had led in the Clinton and Bush years—just with more money, broad state-based causes, better-trained leaders, and a willingness to integrate and coordinate more efficiently with each other.

According to publicly available IRS records, the five essential pillars of just such a Tea Party movement network were all funded and in place by that spring of 2009—the Sam Adams Alliance to direct grassroots efforts; the Franklin Center for Government and Public Integrity to direct propaganda efforts in state capitals across the United States; the State Policy Network to coordinate funding and free-market policies at state-based think tanks; hundreds of grants from the Koch foundations to American universities that were linked in through SPN; and, of course, CSE’s successor, Americans for Prosperity, built to coordinate the effort nationally.

Jeff Nesbit is the executive director of Climate Nexus and former communications official at the FDA and George H.W. Bush White House.